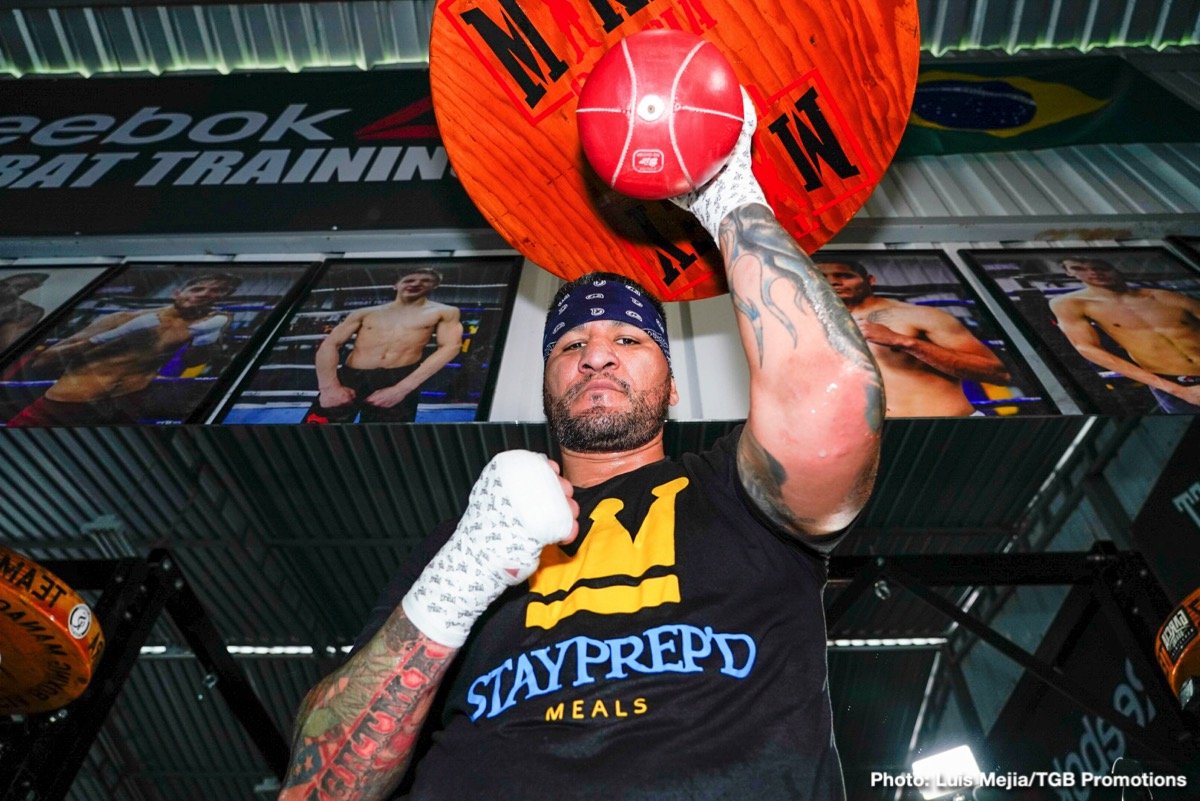 Richard Schaefer – Thank you and welcome to all the media members. It’s Fight Week, I can’t wait. I have been waiting for this for so long and I know many fighters have as well.

I want to first off thank FOX and FOX Sports. They are really rolling from one big weekend this past Saturday where we saw a tremendous card in Los Angeles to now a history making weekend in Dallas.

This is without doubt the biggest pay-per-view of the year. I mentioned it last week, top to bottom an unreal card of a combined 207 wins against 9 losses when you add up the entire card — 155 of those wins by the way of knockout.

So I don’t remember if we ever did a card top to bottom which packed that much of a punch. It really is one of the best pay-per-view cards top to bottom I can remember and we certainly have done some big ones.

Today we have Mikey Garcia and Chris Arreola on the call to talk about camp and the excitement of fight week and they will be available for your comments.

But first up I would like to introduce to you Tom Brown President of TGB and co-promoter of this event who really is largely responsible for almost week after week putting together these stacked cards on FOX and SHOWTIME and all the other platforms.

So Tom please if you would like to make some comments and then introduce Chris as well.

Tom Brown
Thank you Richard. Everybody at TGB is honored to work once again with Richard and Ringstar Sports. Not only is Chris Arreola a fan favorite, he was one of my brother-in-law, Dan Goossen’s, favorite all time fighters.

He will be taking on an undefeated opponent Saturday night in Jean Pierre Augustin who is 17-0-1. Arreola’s last fight as we know was back in December on the Wilder Fury cards so it’s great to have him back so quickly as he makes another run at the heavyweight title.

It will be opening fight on PBC on FOX Sports Pay-Per-View so it gives me great pleasure to introduce the former heavyweight title challenger Chris Arreola. Chris?

Chris Arreola
Hey, how are you guys doing? It’s a pleasure to be here. I’m more than ready for Jean Pierre. I’m excited. It’s a big fight and it’s time for me to jump in and make a noise in the heavyweight division again.

Q
Chris, it’s been almost two and half years since you fought Deontay Wilder and then you returned last December, how did it feel being back in the right after such a long layoff?

C. Arreola
I was actually the main event that night. I was literally the last fight while the people were putting their chairs up and stuff like that so it was a very, very humbling experience. It was nice being backstage and watching everybody fight.

I didn’t feel any ring rust. I felt the one thing that I did feel the most is the excitement, all the commotion, all the people and so I was more than ready and happy to fight that day.

Q
Do you look at this as maybe perhaps your last chance at getting another shot at the world heavyweight title?

C. Arreola
Yes. Absolutely. So I am approaching 40 years old. But I had two years off and in between I took some time off, so I don’t feel like I’m so much of a beam or a worn fighter.

This is my last title run. This is my absolutely last title run and I have to make it count. I’m in boxing again to leave a legacy and to leave something behind. I don’t want to go out the way I did in my last fight against Wilder.

So yes. I’m chasing the title. This is my last title run and I’m going to give you hell. I’m working my butt off because hey, it’s better late than never.

Q
If you get a victory on Saturday who are you looking to face next?

C. Arreola
First and foremost, I will fight anybody. I’m not looking for one name in particular. The one thing that I am looking for is to stay busy this year because I want my name to resonate through the heavyweight division. When they talk about names like Breazeale and a name like Kownacki and stuff like that I want my name to be mentioned also.

And it’s a great time. It’s a perfect time to come into the heavyweight division again because, yes, all these fighters are making names for themselves and the reason being because Wladimir Klitschko is out of the picture.

Ever since Klitschko was out of picture these titles just opened up and a lot of fighters were hungrier to get one of those titles. So it’s a beautiful landscape right now in the heavyweight division. Even though the fight we want to happen is not happening God willing it’s going to happen soon.

Q
We should expect you to keep bringing the fight going forward not only with this fight but with everything else, correct?

C. Arreola
Yes. Absolutely. Absolutely. But the main thing now like I said earlier I have a little more knowledge than most of these fighters. First off I’m a little bit smarter and not taking unnecessary punishment. So it’s time for me to incorporate a lot of more of the boxing skills that I do have that I have never really used.

Q
Your time away from the ring how much did that help you prepare for this fight and going forward with your career?

C. Arreola
The main thing is my time away from the ring gave me time to see everything in perspective as far as my boxing career and as far as my family, as far as life, you know.

So I’m a big Mexican and I’m lucky and I’m blessed we have had a father that stayed with me and made me box when I was a kid. So it’s time for me to do something with it. So that’s why I I’m fighting and this is my last roll like I said before and I have got to make it happen.

Q
How much more important is it to you to kind of send a message that this isn’t just like a last comeback but that you are really here to be a contender?

And the one time if I look bad and I look stupid in the ring man, I will retire. I don’t need to be in this sport to make it look bad. To make myself look bad and to make the sport look bad. So yes, this run is very important for me. Very important.

Q
Do you see a way to kind of use it to your advantage that actually the top heavyweights aren’t fighting each other because it seems like everyone is getting a shot these days?

The heavyweight landscape it’s in its best as it’s been in years. I believe that has a lot to do with PBC, the way PBC presents fights, the way PBC makes fights happen. If you know in the beginning of PBC there were a lot of young fighters up and comers. And now those up and comers, now they are champion.

Spence was one of the first ones that was up and coming on PBC and now he’s on the brink of being a star. So boxing is in the best part right now that it has been thanks to PBC.

Q
Could you tell us specifically what changes you have made this time in preparation for this fight?

C. Arreola
Yes. The main thing is that I know that Jean Pierre is a very crafty and a young fighter that’s very hungry. And for that reason alone man, I had to get my cardio up, I had to make sure that I started boxing again. And what I mean by boxing is not being a brawler. Being able to move. Being able to chase a man down and being able to be light in my feet because this man he is a good mover.

He’s a good fighter. He’s one of those crafty fighters they are going to cut a stick and move on top of things and I’m going to have to be chasing him down. So I have got to make sure that my cardio is up. I had to make sure that I’m able to go the 10 rounds at the pace that I want to go.

So the main thing is my cardio is up. The sparring is the most important thing because shoot, you could run a marathon but that ain’t never going to get you ready for a fight. So sparring, a lot of good lefty sparring. That’s one of the main things that I had to work on.

R. Schaefer
Excellent. Okay. Thank you very much Lisa. And I just want to add that I saw Chris last week at the Garcia Gym. My reaction was the same reaction as everyone else who was at that gym, it was wow. I have never seen Chris in such an incredible shape physically and mentally I think you heard that today

His comments as well on this call show that this is the best Chris Arreola I have seen and that is exactly what he needs to beat the undefeated Augustin with 17 wins and 12 knockouts. And I can’t wait for this fight and I know so can’t Chris.

Thank you very much Chris for being on the phone and I will see you in Dallas tomorrow.