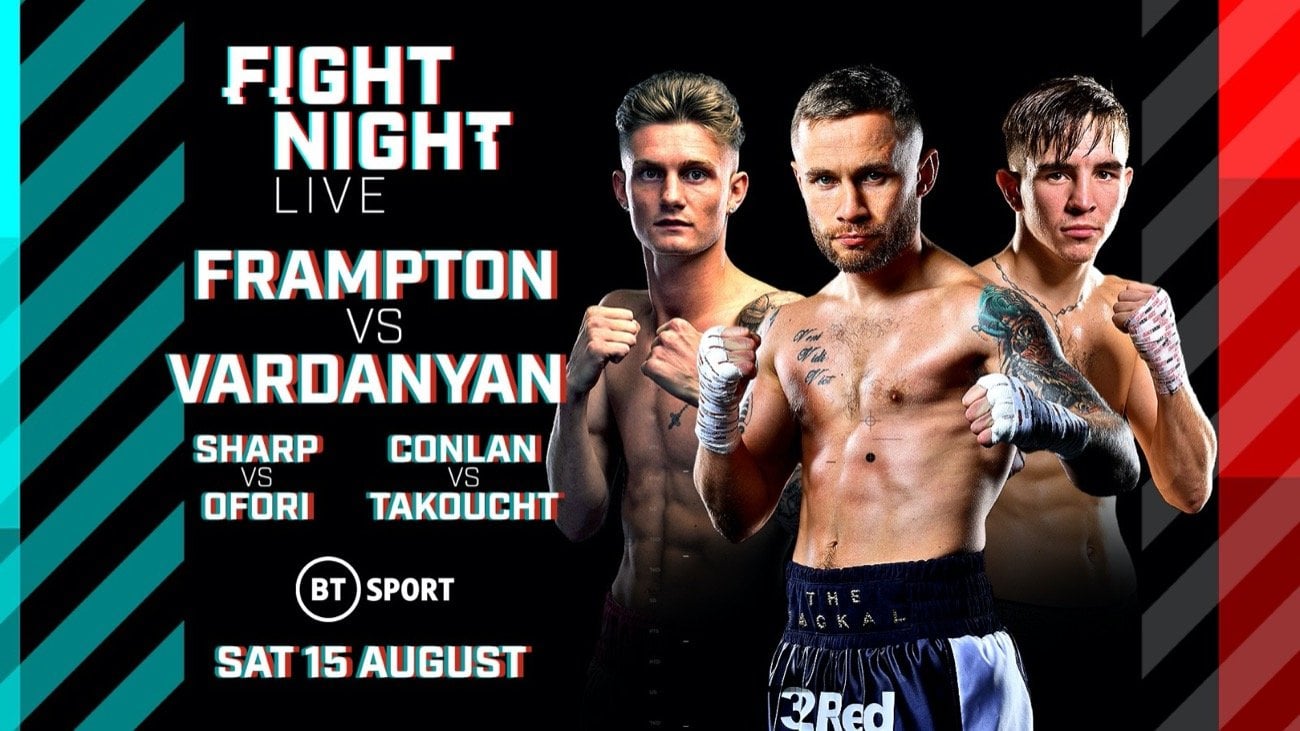 THE FOURTH SHOW of BT Sport’s exciting summer schedule has been brought forward and will now take place on Saturday August 15 with the addition of Belfast stars Carl Frampton and Michael Conlan to the card.

The BT Sport-televised show was initially listed to take place on Thursday August 20, but now switches to the previous weekend with the significant bonus of two-weight world champion Frampton and featherweight contender Conlan being drafted into action.

The originally scheduled headliner between Archie Sharp and Jeff Ofori for the WBO European super featherweight title remains on the card along with an IBF European Super-Welterweight title defence for Troy Williamson.

Frampton, 33, who is awaiting confirmation of his challenge to WBO world super featherweight champion Jamel Herring, will take on the Armenian Vahram Vardanyan, who holds a record of 21-1-1.

The Jackal (27-2-0) last fought in November in Las Vegas when he outpointed Tyler McCreary over 10 rounds.

Conlan (13-0), 28, who holds both the WBA and WBO Intercontinental titles, goes up against the experienced Frenchman Sofiane Takoucht (35-4-1).

Takoucht, 34, has been stopped only once in his professional career and is a former IBF International champion and world title challenger. His single stoppage came in his full IBF title challenge against Josh Warrington in Leeds back in October of last year.

The unbeaten super featherweight Sharp will clock up his 19th professional fight against the 10-2-1 Tottenham man Ofori. It will represent a fourth defence of his WBO European title for the 25-year-old.

Unbeaten Darlington man Williamson defends his title and his record on the show whilst thrilling prospect McCann, just 19, will be having his seventh professional fight since turning pro in May last year.

“What a tremendous opportunity for fight fans to see Mick and Carl fight on the same card,” said Top Rank chairman Bob Arum. “Carl and Mick are closing in on world title opportunities, and I expect spectacular performances from both men.”

Frampton returns following his dominant 10-round decision over the previously undefeated Tyler McCreary last November in Las Vegas. Vardanyan has won six in a row since the lone defeat of his career, and Frampton must prevail to earn a shot at WBO junior lightweight world champion Jamel Herring. Frampton’s goal is to become the first Irish boxer to win world titles in three weight classes.

“I’m excited to get back in the ring, especially as I was unsure at the start of this lockdown about whether I’d get the chance to fight this year at all,” Frampton said. “The Jamel Herring fight was meant to happen in the summer but got ruled out, so this is a fight that keeps me busy and keeps me active. Hopefully, I get the win here, and then we can have the Herring fight for the world title later this year or in early 2021.”

In Conlan’s last outing, he avenged his bitter defeat from the 2016 Olympic quarterfinals, notching a unanimous decision win over Vladimir Nikitin at Madison Square Garden. A planned St. Patrick’s Day return to New York was called off due to the ongoing pandemic, but Conlan will stay active against Takoucht, who in his most recent contest challenged Josh Warrington for the IBF featherweight world title. Before the Warrington fight, Takoucht had won eight in a row.

“I’m delighted to be back boxing again. I haven’t stopped training throughout lockdown, so I’m coming in prepared, and I expect to put on a big performance,” Conlan said. “I’m interested to see how it will be fighting in front of no fans, but I’ve done it before in the amateurs, so experiencing that again is something I’m looking forward to.”

In undercard action on ESPN+:
Dennis “The Menace” McCann (6-0, 4 KOs), the 19-year-old prodigy from Kent, England, will face an opponent to be named in a scheduled eight-round junior featherweight bout. The southpaw stylist turned pro last year and has yet to lose a round.

Troy “Trojan” Williamson (14-0-1, 11 KOs) will make the first defense of his IBF European junior middleweight belt against an opponent to be named.

Paddy “Real Deal” Donovan (3-0, 2 KOs), a Top Rank-signed prospect from Limerick, Ireland, will see action against an opponent to be determined in a six-round welterweight tilt. Donovan is trained and managed by former middleweight world champion and Limerick native Andy Lee.