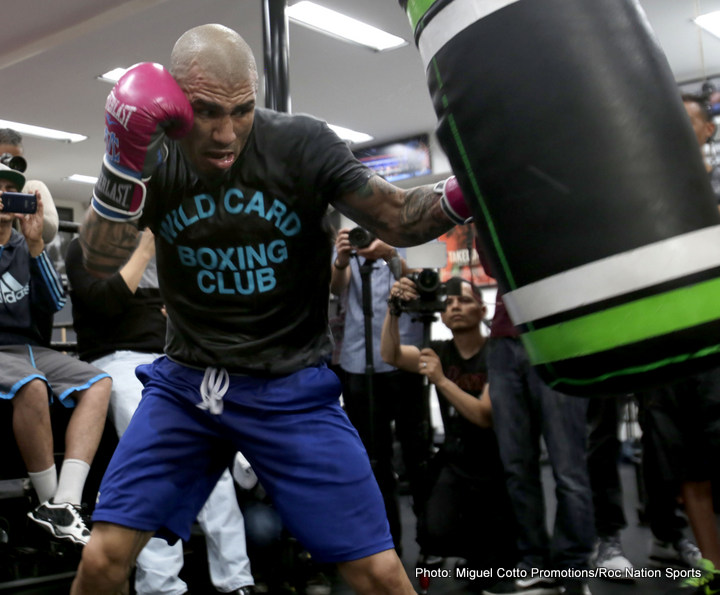 Los Angeles (May 28, 2015) – Miguel Cotto (39-4, 32 KO’s), the reigning WBC and Ring Magazine Middleweight World Champion and the first native of Puerto Rico to become world champion in four different weight classes, will defend his titles against former Two-Time World Champion Daniel Geale (31-3, 16 KO’s) of Australia on June 6, 2015 at Barclays Center in Brooklyn in a 12-round fight that will be televised live on HBO. Cotto hosted a Los Angeles media workout Tuesday afternoon at Wild Card Boxing Club in preparation for his title defense against Geale.

Here’s what Cotto and his trainer, Freddie Roach, had to say:

“I feel good and in the best shape possible. I just feel ready. I know Geale is a tough opponent and he is going to bring his best on June 6, but I trust in the work we have done here in Los Angeles and I’m going to bring my best too.”

“After 14 years in boxing, the best decision I could have made was to take the last year off. My mind was not in boxing, but since I got here with Freddie, everything is working perfectly again. Boxing is all I know. Boxing is my life. Through boxing, I raised my family and I work to provide the best future for them. They are the reason I love boxing.”

“Freddie comes here every day with the best attitude and he knows how to get the best out of me.”

Read:  Deontay Wilder Still Not Sure If He Will Fight Again, Says He Is “Definitely Considering Coming Back”

“It will have been 364 days to the day on June 6 since I have been in the ring. It’s not difficult to get back in after this long stretch. I’ve been focused on my work. I have gained more knowledge during my time off in order to get myself ready to fight again.”

“Daniel Geale is the next chapter in my career. After I get through him, I can talk about what comes next.”

“Miguel’s sparring has been great. His movement has been very good. It’s hard on me in the ring! His body shots are very effective and the head shots come with it. I think we are going to get a late round knockout. Geale is tough enough to go some rounds, but a knockout in a late round…that’s my call.”

“One of Miguel’s greatest strength against Geale will be his body shots, but Miguel’s knowledge in the ring will be Geale’s ultimate undoing.”

“He has found a new home here at Wild Card and I’m glad I provided that for him. He loves this gym. He loves the atmosphere. He’s thrived in this environment and when a fighter is in a good mood and happy, he performs at the highest level.”

Cotto vs. Geale, a 12-round fight for Cotto’s WBC and Ring Magazine Middleweight World Championships, takes place Saturday, June 6 at Barclays Center in Brooklyn and will be televised live on HBO. The fight, which is presented by Roc Nation Sports and Miguel Cotto Promotions in association with Gary Shaw Productions, will be the official kick-off event of the 2015 National Puerto Rican Day Parade Week and is sponsored by Cerveza Tecate, Jaybird, TapouT, Tequila Cazadores and Venue Kings. In addition to the great action inside the ring, the event will feature several notable Roc Nation touches that will further serve spectators with an enhanced fan experience, including Roc Nation and Grammy nominated artist Big Sean taking to the ring for a special performance prior to the main event. The event will be hosted by notable emcee “The Voice of New York” Angie Martinez and will also feature hit master DJ Lobo who will serve alongside Martinez throughout the night. Tickets priced at $500, $350, $250, $200, $150, $100, $80, $50, $35 and $25, not including applicable service charges and taxes, are on sale now and available for purchase at www.barclayscenter.com, www.ticketmaster.com and at the American Express Box Office at Barclays Center. To charge by phone, call Ticketmaster at (800) 745-3000. Doors open at 6:00 PM, the first fight begins at 6:15 PM and the HBO telecast begins at 10:30 PM ET/PT.