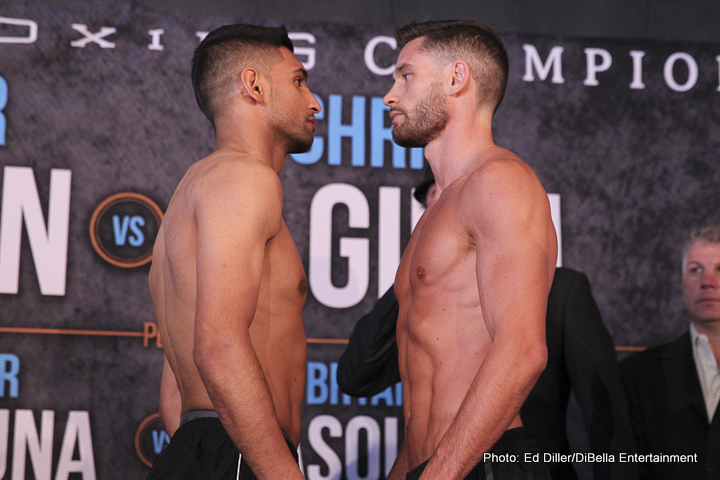 Tonight in New York from the Barclays Center, Amir Khan squares off against light hitting Chris Algieri in a much criticised fight that has brought considerable pressure on Khan from ALL corners – particularly the fans – who have bombarded his twitter feed over recent days and weeks to let him know exactly how they feel about this fight – which is largely seen as meaningless.

Kugan Cassius spoke to former 2 weight champ Paulie Malignaggi for iFLtv ahead of the fight to discuss his own thoughts on the contest.

The New Yorker – who was due to box on the card before sustaining a cut in training – is in the UK for Sky Sports punditry duties ahead of tomorrows Brook v Gavin card from London and essentially agrees with the fans, albeit it a little more respectfully than some of the tweets I’ve seen.

“It’s a logical next step for Amir if he can’t get the Mayweather fight – to keep busy. I think Algieri is a solid guy – but stylistically it’s not a good fight for Chris.”

“Guys who box don’t typically do well against Amir. You need more than just to be a boxer, you need to have some sort of bang in you so to speak – anybody who boxes – examples like myself, Devon Alexander – guys like that you know? We’re just pure boxers and not any kind of bang in them. Amir tends to do really well against them. You need a bit of physticality to your style to trouble Amir – even if you’re a boxer, you need a bit of physicality.”

Amir will be damned if he does and damned if he doesn’t with this one. But after not fighting Kell Brook and then facing Algieri – who he says now he took on out of desperation – the Mayweather fight he so craves in September is looking farther and farther away. In my eyes.

A statement win is expected.