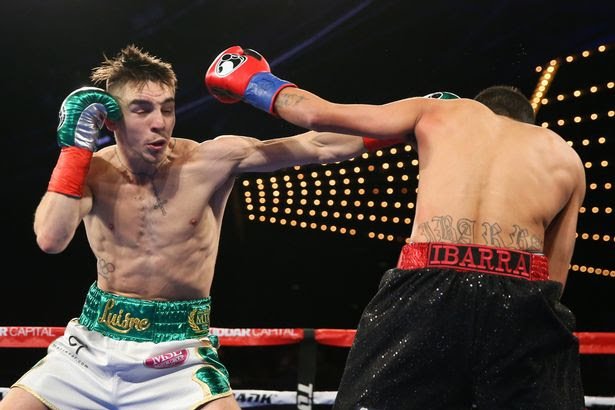 Michel Conlan insists that he will not be a bit-part player at Madison Square Garden Theater on Saturday night when he fights in the chief-support bout to the world super-featherweight title clash between Vasyl Lomachenko and Guillermo Rigondeaux.

Undefeated Belfast featherweight Conlan (4-0, 4KOs) takes to the ring for the fifth time as a pro this weekend, returning to the scene of his successful paid debut last March, when he meets Argentina’s Luis Fernando Molina (7-3-1, 2KOs).

Promoters Top Rank have installed their six-round bout as the co-feature at the New York venue just ahead of the much-hyped showdown between double Olympic gold medallists Lomachenko and Rigondeaux.

A sell-out crowd of over 5,000 will be in attendance, with a large contingent of Irish fans set to be present to support Conlan, who is out to impress on a card that has attracted worldwide media attention ahead of a live ESPN broadcast in the US while BoxNation will screen the bill in the UK and Ireland.

Millions are expected to watch the ESPN TV broadcast Stateside and MTK Global-backed Conlan is out to turn heads on Saturday night.

“I feel I deserve this opportunity, 100 per cent, because it’s the same arena I sold out on my debut,” said Conlan, speaking after Thursday’s final pre-fight press conference.

“I’m here on the same card as two of the greatest pound-for-pound amateurs ever – on their undercard in the same venue I sold out on my debut – but I know there’s reason for having me on this bill because Top Rank know I can sell it. It’s great to be on it, but I know why I’m on it – because I can sell seats!

“And I know I have to impress when I’m fighting on such a big stage and when Top Rank are backing me to do the business. I’ll win and I’ll win in style on Saturday.”

The 26-year-old opted to move up in weight to campaign long-term at featherweight ahead of his last outing, resulting in an impressive second-round stoppage win over American Kenny Guzman in September.

And Conlan feels he is ready to deliver another knockout against 29-year-old Molina, who has yet to be stopped in an 11-fight career so far.

“I’m feeling good and I’m feeling strong,” said Conlan. “I’m making it easy this time, so it’s all good. I’ve learnt from my last few camps and I’ve had no problems at all this time around.

“I just can’t wait to get in the ring and deliver on the night. It’s a great shop window with ESPN showing my fight live ahead of the main event in the States, so I’m out to make a statement.”

Legendary Top Rank promoter Bob Arum reaffirmed plans to have Conlan return to boxing’s most famous fight venue next year as he backed the Irishman to deliver this weekend.

“We’re big fans of Mick. He’s been coming along terrifically and he’s going to be a co-feature at Madison Square Garden this weekend, but we’re bringing him back for St Patrick’s Day next year on another big card,” said Arum. “He’s only going to get better and he’s a future star of boxing. I expect a big performance from him this weekend.”

Jamie Conlan believes his brother Michael will showcase his ‘superstar potential’ in New York this weekend when he fights for the second time at Madison Square Garden’s Theater.

While Belfast’s two-time Olympian was the headline act at MSG for his professional debut last March, Michael Conlan will be a support act at the famous fight venue on Saturday night.

Conlan will look to extend his undefeated pro record to 5-0 when he meets Argentinean Luis Fernando Molina (7-3-1) over six rounds – live on BoxNation in the UK and Ireland – in the chief-support bout ahead of the meeting of two of world boxing’s most technically-gifted fighters.

“I think this fight is perfect for Mick,” said elder Conlan brother, Jamie. “I’m excited for him to perform on such a big stage in front of the media that are going to be covering such a big card.

“It’ll do him the world of good and it’ll propel him on to another level in terms of superstar ability and potential,” continued Jamie, who believes Molina will offer a decent test to asses how Ireland’s former world amateur champion is progressing in the paid ranks.

“Molina’s someone we’ve had our eye on,” he explained. “A tough South American, who’s going to try and push Mick back. He’s got a good left hook, he’s never been stopped and he’s mixed it at a decent level as both an amateur and a pro, so it’s another step in the right direction.”

The elder Conlan recently suffered his first professional defeat when losing out in a world super-flyweight title fight to classy IBF champion Jerwin Ancajas in Belfast.

Now 19-1 as a pro, Jamie is taking a break from the ring in the build-up to Christmas as he assesses his own fighting future, while the 31-year-old was this week unveiled as Professional Development Coordinator for Matthew Macklin’s MTK Global management group.

As part of his role, he will be involved in implementing boxing-specific programs for MTK’s fighters as well as taking on coaching and mentoring duties.

“You’re just more emotionally hurt than physically hurt, but I’m feeling fine,” said Jamie on his recent defeat. “I’m looking forward to the new role now and hoping to help my fellow MTK fighters plan for their careers and improve in every way I can.

“But, for now, I’m just focusing on Mick’s fight and trying to help him prepare to get another win.”

Meanwhile, Michael Conlan is looking forward to returning to professional boxing’s most famous venue this weekend.

“It’s great to be back here in New York and it feels like home,” said the younger Conlan at today’s final pre-fight press conference. “I’ve only been here a few days, but it is class and I love the place. This is where you want to be as a fighter – there’s so many Irish here and being surrounded by your own people is great.

“It is a special place to fight. I already believe it is my home from home. The amount of fans I’ll bring on Saturday night is going to be phenomenal and I look forward to coming back here again on St Patrick’s Day after I get the win on Saturday.

“I feel like I’m moving along nicely – four wins, four KOs so far and it’ll be five at the weekend. Then I’ll enjoy Christmas and be back at it in the new year.”

Michael Conlan is on a scouting mission to assess two of the world’s best fighters as he prepares for his undercard date in support of the big super-featherweight showdown between Vasyl Lomachenko and Guillermo Rigondeaux in New York this weekend.

The undefeated 26-year-old Irishman returns to the venue where he made his successful pro debut in front of a sell-out crowd last March, taking on Argentinean Luis Fernando Molina (7-3-1) over six rounds (live on BoxNation in the UK and Ireland).

But former world amateur champion Conlan is thinking big as he also hopes to use the fight-week build-up to size up two of world boxing’s best pound-for-pound fighters ahead of their headline bout.

“I think both Rigo and Lomachenko are unbelievable fighters,” said Conlan. “I’ve looked up to them my whole amateur career and now obviously in my professional career.

“But one day soon I expect to be fighting one of them, so I wouldn’t feel star stuck about being on the bill or anything like that.

“I’m fighting on the bill with two of the greatest amateurs to ever live and potentially two Hall of Fame pros as well so it is exciting – but I always have the end goal in mind as well, which is that one of them could be a future opponent.”

Conlan participated in a media workout session yesterday (Weds) at Mendez’s Gym on East 26th Street in Manhattan just ahead of the main-event fighters and he welcomed the chance to assess two of boxing’s most stylish elite fighters.

“I consider this an opportunity to see where I’m at and where they’re at and I’ll take it from there. I’m just watching and learning because I know they’re ahead of me, but I know it’s not going to be too long before I get to that stage,” continued Ireland’s two-time Olympian, who admitted that a fight against either Rigondeaux or Lomachenko is still some time away.

Conlan has built a 4-0 record since turning pro eight months ago, based out of LA under coach Manny Robles, and the MTK Global-managed fighter insists he won’t be calling either of the headliners out just yet.

Conlan’s elder brother Jamie ran the rule over his younger sibling at yesterday’s media workout as he helps him prepare for this weekend’s bout against Molina.

Jamie recently suffered his first pro loss in a world super-flyweight title fight defeat to classy IBF champion Jerwin Ancajas of the Philippines, but he yesterday received a boost with the announcement that he has been appointed as MTK Global’s Professional Development Coordinator.

While the elder Conlan is taking a break from training while helping his brother out, the world-title challenger reckons Michael has the skills to eventually compete with the likes of Rigondeaux and Lomachenko as a pro.

“He needs time, he really needs time before that,” said Jamie. “He has a lot of learning to do. These two are the crème de la crème of pure boxing ability and two of the best we’ve seen in a few decades at least.

“To be at that level would be something else, but he’s 100 per cent certainly capable of reaching the elite level that these guys are at.”