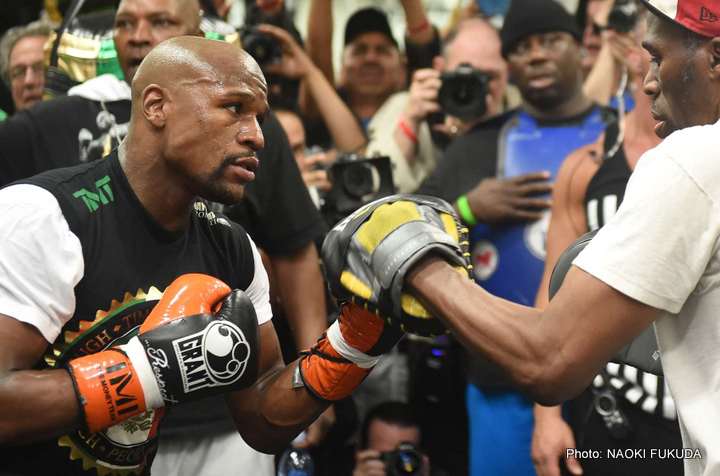 Clichés like “key to victory” and strategic game-planning referring to the coaches’ insights and observations are a vital part of the mental preparation and the “psyche” of any pugilist. However even the most elaborate game plan is just a hypothesis, an intention that lasts until the first big shot is landed. In the late rounds when incremental damage piles up boxers fight on habit and instinct with rare moments of ingenuity and little regard of the initial game plan. They are creatures of habit like everyone and rarely act out of character especially under pressure. Hence the importance of style – an amalgam of habits and steady boxing skills replenished and honed over the years. Here is a review and comparison of the combatants’ fundamentals before the clash of epic financial proportions and yet-to-be-seen technical value.

Physical strength is not a crucial asset for a welterweight but has become very fashionable throughout the divisions. In view of past disputes about “vitamins” use and random testing, this issue will be kept quiet along with other sensitive issues until the balance reports come out. Pacman used to be the culprit, now it seems Floyd has grown heavyweight arms on a welterweight body and the Filipino’s energy levels are no longer on the agenda.

Stance: Floyd’s orthodox stance is a direct import from his amateur days, his feet are wide apart for balance and range and his shoulders are poised correctly to shield the sweet spot. He keeps his long arms wherever he pleases when he is out of range but the feet, body and head position remain in a textbook position.

Pacquiao’s southpaw stance should be factored in as an asset. He takes much more liberties than Floyd and often does things that are weird from technical point of view but he is good at it. He appears to be comfortable and agile while on guard and rolls in and rolls under in a very sprightly manner – crucial for this fight.

Defense: The name of the game for Floyd Mayweather. His defensive mastery defines his style. Pacman’s defense often is his offense, he slips to counter, not to escape. He is not careless about defense but he is an aggressive type and his defensive skills are not in the same street with Mayweather’s.

Footwork: There is a general impression that Floyd is aging from the feet up. He is not contesting the public view and he made certain adjustments against Canelo and Maidana to deal with this issue. His feet are far from being shot but they are not the same anymore, there are speed and coordination warning signs. The decline in foot speed has made him a better fighter, it has pushed him to fight rather than box on some occasions and may be the reason he has decided to bulk up a little.

Pacquiao has shown little if any decline regarding his foot speed. Again he lacks Floyd’s finesse and poise in his footing but he may be faster and snappier at this stage.

Punch power: Both boxers hit hard enough for the weight class, single punch power is unlikely to turn the tables. Punch volume/output and punch placement would be a key factor.

Chin: May not be a factor, none of them is glass chinned regardless of the 3 KO losses of the congressman.

Ring generalship: The obvious answer would be the American but he of all people will not underestimate Pacman’s hectic dashes and spatial volatility. Pacquiao is on par with Mayweather at this elastic concept (generalship) and he is more experienced at hard battle and risky exchanges. He is braver too – or more reckless if you are a detractor.

Fighting spirit: Pacquiao. This element has lost some of its importance nowadays but the old school tends to relate to Pacman for his aggressive valor and resent Mayweather’s extreme caution and refusal to engage. I expect Pacman to try to draw Floyd into exchanges and Money might even amaze us by accepting once in a while – on his own terms if he can, otherwise he’ll take evasive measures.

Coaching expertise/corner wisdom: The comic communication between Roach and Mayweather Sr. resembles a kindergarten fracas. Sr. is expressing himself in rhymes but is less than poetic towards “The Joke Coach” or the “Jokester” and promised to take his son to “the next phrase”. Roach questions Mayweather Sr. sanity and believes Sr. ‘does not know what to tell his fighter” and you can’t understand what he says between rounds anyway. Apart from the childish banter they both know too much about boxing but may not know enough about the two boxers.