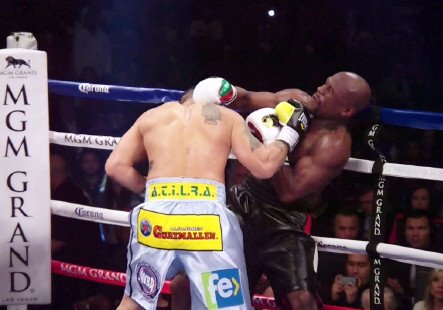 Relentless pressure from the first bell had the 37 year old ‘Pretty Boy’ backing up on the ropes and fight fans and commentators alike must have licked their lips and uttered ‘Game on.’

Maidana (35-3) was coming off four straight wins, including a sensational win in which he had solved ‘The Problem’ Adrien Broner, and in the opening sessions of this fight, he must have felt that he was slowly beginning to unlock the ‘Mavinci’ code.

It was shaping up to be a hard night for the Michigan Man, as the first five sessions seemed to go to the Argentinean puncher on aggression alone. A cut above Mayweathers right eye in the fourth, caused by an accidental head butt, also suggested that things were not quite going to plan.

But, Mayweather said after the fight, “A champion must be able to adapt.” That is what the undefeated Champion did, as he began to pick off his opponent with right hand leads and also win a few battles on the inside.

The man they call ‘TBE’ now began to throw his punches with a bit more intent as his Father-Trainer Floyd Snr, told him to ‘dig’ his feet into the canvas and discourage the 30 year old Argentinean warrior from waging in.

Hurtful shots were landed with precise accuracy, but Marcus ‘Chino’ Maidana refused to take a backward step and kept the fight interesting until the last bell.

When it sounded, a relieved Mayweather (46-0) held up his arms to celebrate but it was evident that he knew that it had been close affair.

Like after all close fights, fans will debate in bars, clubs and on social network sites, for many weeks about the judges score cards and who should have won.

One thing is for sure; Maidana did indeed have the key to unlock the ‘Mavinci’ Code, but even after 12 hard rounds, was unable to open it.