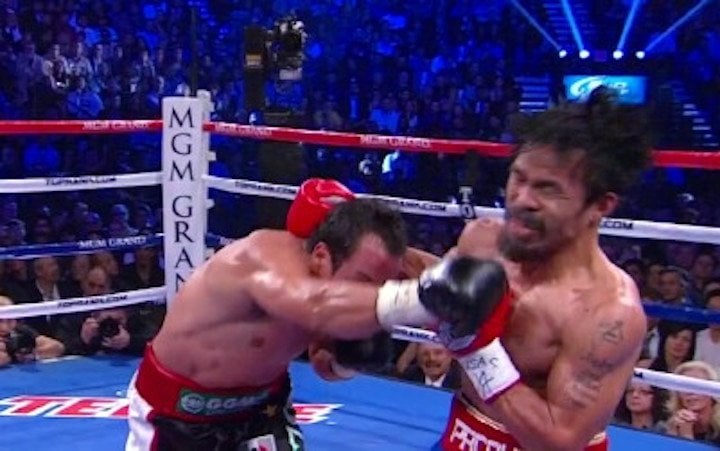 It was 15 years ago today when they first met: Manny Pacquiao and Juan Manuel Marquez – and over the course of eight years and seven months, across three weight divisions, with almost 42 rounds of great fighting produced, these two all-time greats lit up the lower weight divisions like few men have ever done.

And to think, the first fight between the two fiercely competitive and so evenly matched warriors almost ended via a first-round stoppage win for Pacquiao. Had this happened – Pac-Man scoring three knockdowns and seemingly on his way to a short night – there would have been no need for fights two, three and four. But, boy, how fight fans would have missed out had this been the case.

Instead, Marquez of Mexico managed to fight his way out of that disastrous opening round in Las Vegas (the scene of all four epic wars) and then come tearing right back at the idol of the Philippines. The rivalry was now on with gusto and both fantastic fighters were pushed to the limit. The first fight scored a draw, a return was demanded.

Fans had to wait almost four years for the rematch, the sequel taking place in March of 2008. Another special battle ensued,with 12 more rounds of superb action going into the history books. Yet after the 12-round split decision that went to Pac Man, opinion was now divided: just who was the better fighter? Some fans claimed Marquez had now been denied two wins that should have been his, while others insisted Pacquiao had won both fights.

The third fight, on November of 2011, only served to intensify this argument. Pacquiao again emerged the victor by the slimmest of margins; this time picking up a majority verdict. Was Manny’s star power swaying the judges? Would there be a fourth fight between the two future Hall of Famers?

As it turned out, the most shocking fight of the series was saved for last. The fourth battle, which took place in December of 2012, shocked the entire world. Another gruelling war was shaping up, with savage punches and knockdowns exchanged, before IT happened. With a second remaining in the sixth-round, “Dinamita” crashed home with the punch of his career, a right hand that instantly knocked Pacquiao out. It was as special as it was so utterly unexpected.

There was much talk of a fifth fight, but Marquez wasn’t interested. Two of the greatest fighters of their era ended up at 2-1-1, with Pacquiao winning the series. But for many it was Marquez who emerged as the greater fighter of the two. Just.