Manny Pacquiao – who is in Seoul – will use hologram tech to meet his opponent, Korean MMA star DK Yoo, and the press for a Triller Fight Club event in Los Angeles; Streams live Thursday.

The hologram event will mark the first time Proto hologram technology will be used in a combat sports event, allowing the PacMan to see and hear Yoo and the media, and respond naturally, in real-time, just as if he was in the room. Watch live on Thursday: 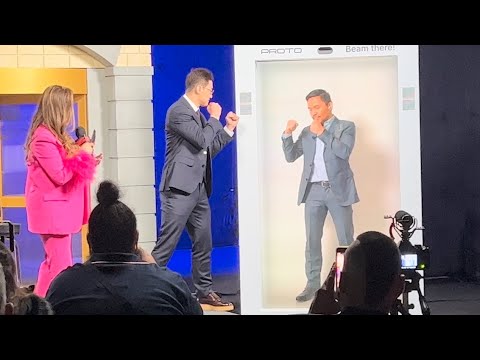 Living legend and all-time great Manny Pacquiao will return to the ring. Pac Man, the latest superstar to sign on for an exhibition bout, will face South Korean martial artist DK Yoo. Yoo has already announced the fight:

“I have told you I will fight against one of the best fighters in the world. I tell you right now who my next opponent [will be]. I’m going to fight against Manny Pacquiao,” Yoo said on his YouTube channel (the channel pulling in a reported 65,000 subscribers).

Pacquiao responded with a short message of his own:

“DK Yoo, see you in the special event this coming December. God bless you and be safe.”

The Pacquiao-Yoo exhibition bout is set to take place in South Korea but we will have to wait for further details, such as the scheduled length of bout, the weight the bout will be fought at, size of gloves, etc. But any fight involving Pacquiao is a big deal and there figures to be no shortage of fan attention for this event. Yoo practices his own form of martial arts known as ‘Welfare Training System,’ and he has held seminars teaching his art. The Pacquiao-Yoo fight has already been dubbed “Boxer Vs. Meditator.”

Pacquiao, who turns 44 in December, last fought in August of last year when he lost a decision in his fight with Yordenis Ugas. After losing in his bid for the presidency of the Philippines, there was almost instant chatter about the eight-division champion returning to action and fighting again. Now it has been confirmed that Manny will fight again. Sort of.

Who knows, this exhibition bout could be a lot of fun. And it could be a whole lot different to the other exhibition bouts we’ve seen. Yoo incorporates kung foo and aikido into his own unique brand of martial arts. How well can Yoo box, though?

It seems likely this exhibition event will be a pay-per-view offering.