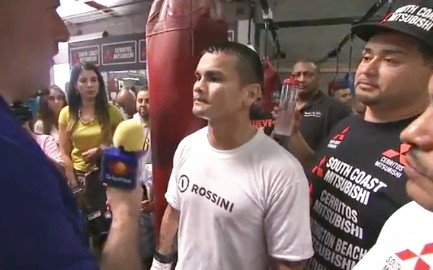 Marcos Maidana (35-4, 31 KOs) met with the media earlier today to talk about his upcoming rematch against WBA/WBC welterweight champion Floyd Mayweather Jr (46-0, 26 KOs) next month on September 13th at the MGM Grand in Las Vegas, Nevada.

“I think I forced him to fight and that’s the reason he fought that way,” Maidana said. “I don’t think he did it for the fans. I’m going to keep pressuring him. When I did that in the last fight, I did very well. It had to do with conditioning. When he boxed, I let him move around because I got tired. I hope Floyd Mayweather will fight like a man and stand in front of me again.”

I think it’s safe to say that we’re not going to see Mayweather standing and making it easy for Maidana like he did last time. Mayweather looked like he patterned his fight plan on the poor one that Adrien Broner used in his fight against Maidana last December. Mayweather stood with his back against the ropes the same way that Broner did. And just like Broner, Mayweather took punishment and looked bad in the fight.

The difference is that Mayweather did a much better job of making Maidana miss compared to Broner, and he was able to make adjustments in the second half of the fight by getting in the center of the ring and picking Maidana off with some really clean shots. Maidana looked uncomfortable when Mayweather took the fight from the ropes, and he didn’t have the stamina to retake control of the fight.