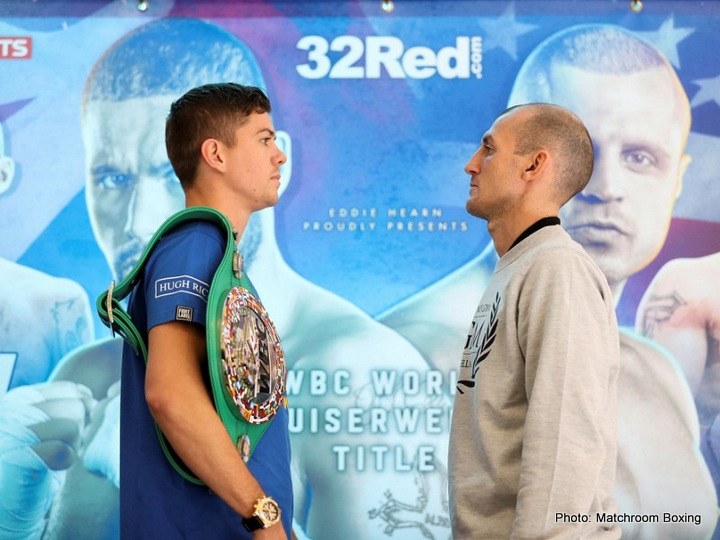 Luke Campbell MBE says beating Derry Mathews is a must if he wants to prove he’s ready for world titles in 2017 as they clash at the Echo Arena in Liverpool on Saturday night, live on Sky Sports.

Campbell defends his WBC Silver Lightweight title against the experienced Liverpool favourite, whose last fight – his 50th – was here for the WBO World title against Terry Flanagan.

The Olympic gold medal hero landed the title in July outpointing Argenis Mendis in Leeds, and the Hull star says Mathews is the type of examination he needs to pass with flying colours to land a World title shot.

“This will definitely be my toughest test to date but that is what we look for,” said Campbell. “Every fight we progress with now is a tougher test and Derry is that. He is a tough warrior who likes a war and he is very experienced.

“I have been a fan of Derry for a long time. I used to watch him years ago. He is a great guy in and out of the ring and this fight is happening simply because the British fans have been dying to see it. As soon as it was announced people went crazy for it and that is why it is happening.

“Being involved in a fight the fans want to see is very important and it creates interest and everyone is buzzing about it. That’s what you want when you are fighting; for people to be buzzing about it.

“You don’t know what the key will be until you get in there. People’s game-plans can change once they start getting hit.

“Beating Derry would open doors because he is an experienced fighter who boxed for a World title in his last fight. I am climbing up the ladder and I want to keep climbing.

“I want to keep moving through the gears and I feel that this year that is exactly what I have done. This is my third fight this year and it will be my toughest opponent of the year.”

“This is Derry’s hometown but it doesn’t might the slightest bit of difference to me – I have had some great nights and have some great memories at the Echo Arena. I won the European Championships here, the GB Championships here, so the Echo Arena has been a good place for me and I am excited to be back here in front of the Liverpool fans. It is a great place to box, I love boxing in Liverpool.”

Campbell’s clash with Mathews is part of a huge night of action in Liverpool as Tony Bellew defends his WBC World Cruiserweight title against B.J. Flores.

Derry Mathews believes he has the power to break the heart of Luke Campbell MBE and KO him when they clash for Campbell’s WBC Silver Lightweight title at the Echo Arena in Liverpool on Saturday night, live on Sky Sports.

Mathews comes into the fight on the back of a crack at WBO champion Terry Flanagan here in March in his 50th pro outing, and the Liverpool favourite believes his power and experience, coupled with the vulnerabilities he’s seen with the Olympic gold medal man hitting the canvas in recent fights, will see him destroy Campbell’s World title dreams and set himself up for another shot.

“Everyone knows Luke was a great amateur but there are flaws in him,” said Mathews. “Anyone who knows boxing can see that. I know I’m going to go in there and break his heart. I can and I will beat him tonight. He’s never been in with anyone like me before and he will get exposed.

“I punch much harder than any of the Lightweights out there. He’s been dropped in two out of his last three fights by guys who hit nowhere near as hard as I do. When I clip him with 8oz gloves on, he’s in big trouble and he’ll go down. I believe I’ll tag him badly, hurt him, then it will be all over.

“Luke has boxed all over the world and he’s an Olympic gold medallist so I’d be surprised if the crowd gets to him. But he is coming to my backyard and I can’t wait to see all the mad Scousers screaming on Saturday for me. It will be a new experience for him so let’s see how he gets on.

“Luke has changed trainers recently and everyone is going on about how fast and quick he looks on the pads with Jorge Rubio – but it doesn’t impress me; pads don’t hit back like I do.

“He can have all the speed in the world but he is going to get tagged by me at some stage in the fight and he will be in serious trouble. I can’t wait for Saturday to go out there, get that ‘W’, win the WBC Silver and be knocking on the door for another World title shot.”

Mathews’ clash with Campbell is part of a huge night of action in Liverpool as Tony Bellew defends his WBC World Cruiserweight title against B.J. Flores.

Face value tickets for Bellew vs. Flores are also be available from http://www.stubhub.co.uk/matchroom-boxing-tickets/ . StubHub is the official ticket partner and marketplace of Matchroom Boxing and Anthony Joshua.

Luke Campbell MBE will defend his WBC Silver Lightweight title against Derry Mathews at the Echo Arena in Liverpool on October 15, live on Sky Sports.

Campbell landed the belt against Argenis Mendez in his last outing in Leeds in July, and the Hull star will be looking to cement his position as a World title contender with a win over Mathews. The 2012 Olympic gold medal hero is looking for a third win on the bounce as he targets World honours in 2017, and the 28 year old is excited by the prospect of facing a hostile crowd in Merseyside.

“This is exactly the kind of fight I have been looking for and doing it in his back yard is even more exciting,” said Campbell. “I feel like I am starting to reach the peak of my professional career and Derry has some great wins on his record, I’m expecting it to be my toughest fight yet.

“This fight will engage the British public and that’s what I want, to entertain the fans and give them the big domestic title fights that can be made. My camp is underway in Miami and I can’t wait for a huge night on October 15 in Liverpool.”

‘Dirty’ Derry is looking to get back onto the World title trail having challenged Terry Flanagan for the WBO crown at the Merseyside venue in March, and the former British and Commonwealth champion will be looking to add another Hull victim to his impressive CV having KO’d Tommy Coyle on the undercard of Campbell’s pro debut in 2013.

“I don’t back out of fights, especially in my home city, it’s a great fight for me and one I can’t wait for,” said Mathews. “I’ll take anyone on, and it’s an opportunity to fight in my home city against a World-class fighter, I think this has come too early for him.

“When I win this fight it’s going to open doors for bigger and better things, the Lightweight scene is thriving at the moment and there’s plenty of life in this old dog, believe me.

“Luke has had it all his own way in the pros so far, he’s been beaten by a guy he was expected to beat and he’s never been in with a puncher like me and someone that’s going to take him into deep waters. He was a fantastic amateur but the pro game is different and I don’t think that he’s settled in as a pro as he wanted to.

“Luke will experience things he’s never faced before and I believe I can beat him otherwise I wouldn’t have taken the fight. People might look at my age and the number of fights I’ve had, but I still feel fresh and I live the right life, and I’m prepared to dig deep and do what I need to get the win.

“I don’t know what it is with Eddie and his fighters, for some reason he wants to get me beaten up but it never works! I always get the win. I’m always the underdog against the Matchroom fighters but I come out on top and that’s going to continue, I think Eddie’s put Luke in too deep here and I’ll beat another one of his guys. I want to thank my management team at MGM for making this fight with Eddie.”