Vasily Lomachenko is looking forward to beating Teofimo Lopez this Saturday night in their match on ESPN and ESPN Deportes.

All the trash-talking that IBF lightweight champion Lopez (15-0, 12 KOs) and his dad have been doing during the promotion of this fight has WBA/WBC/WBO champ Lomachenko (14-1, 10 KOs) seeing red, and he wants to punish him for it.

Lopez, 23, has made it a point to let the media and boxing fans know about his views on the 32-year-old Lomachenko, who he sees as a cocky, smug little fighter that he plans on putting in his place once and for all.

Teofimo doesn’t like the way that Lomachenko carries himself, and he doesn’t rate him the way some of the boxing fans do. He sees a small guy that he’s going to take apart once he puts hands on him.

Teofimo thinks that Lomachenko is up at 135 to try and cash out because he’s an old lion now, and he knows the end is near for his career.

Lomachenko vs. Lopez will be headlining on Saturday night at ‘Bubble’ at the MGM Grand in Las Vegas, Nevada. The fight card kicks off at 7:30 ET. 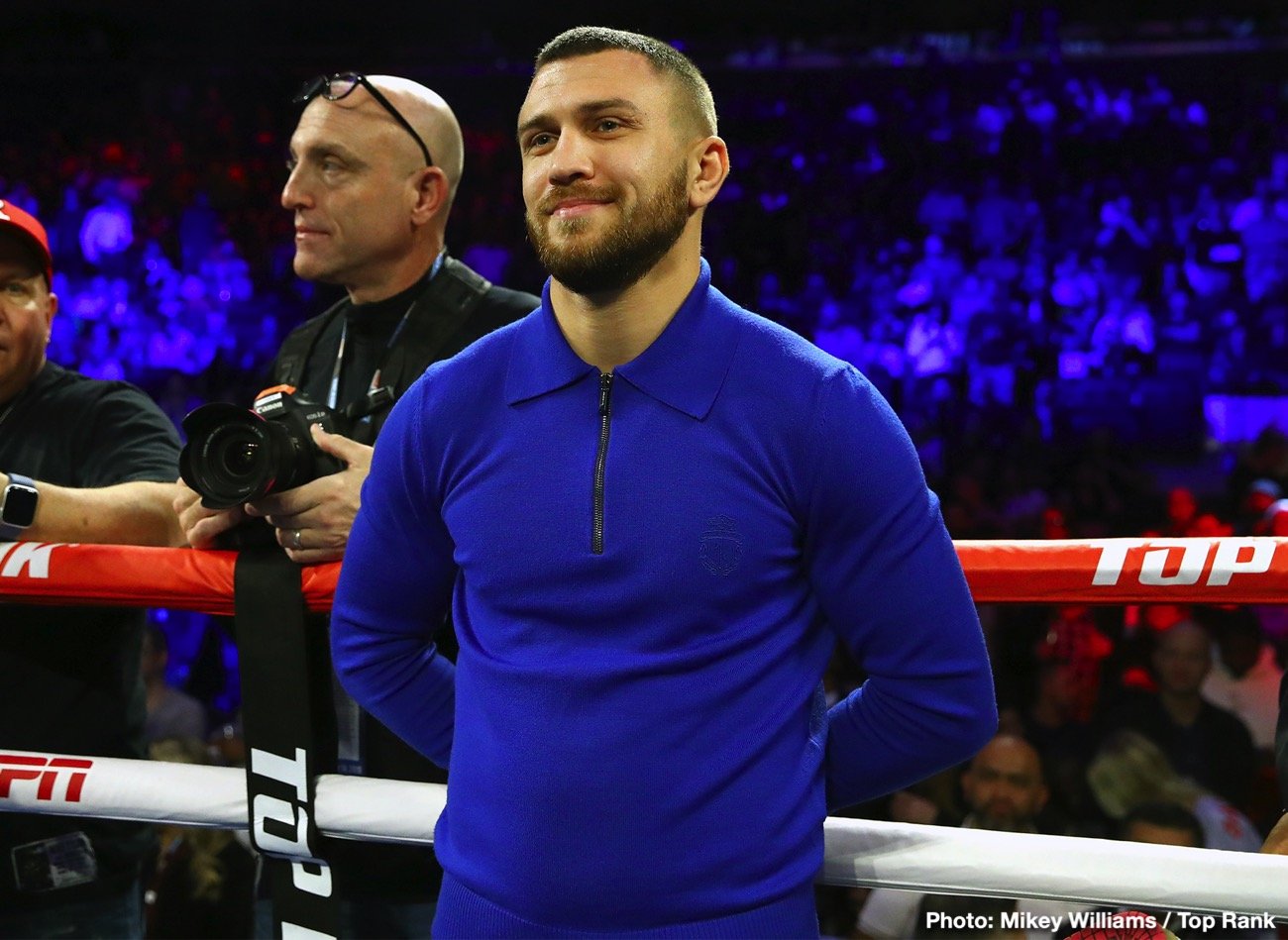 “I want to beat him very badly, very, very badly. I want to really beat him badly,” Lomachenko said to The Ring. “(Lopez’s father) thinks (Lopez is) a big superstar like Tyson Fury. That’s why they do the trash talk. They act like they’re a big superstar, but they’re not.”

It would be best for Lomachenko to try and stay calm as much as possible against Lopez because he could end up being sorry if he tries to trade with him. Lomchenko can’t fight the way he normally does against a slugger like Teofimo without getting hurt.

The problem that Lomachenko has is he’s not fought anyone like Teofimo as a pro. Yeah, Lomachenko defused Gary Russell Jr, who has better hand speed than him in their fight in 2014, but he wasn’t a huge puncher.

The guys that Lomachenko has beaten that did have power were slower fighters like Nicholas Walters, Guillermo Rigondeaux, and Roman Martinez. Teofimo is bigger, faster, younger, and stronger than all of those guys.

Also, Lomachenko is older now at 32, and not the young guy that beat all those fighters. He’s not a young 32 the way that Gennadiy Golovkin was when he was the same age. When GGG was 32, he was destroying everyone, and no one was talking about his age. But with Lomachenko, it’s different.

He’s fighting more like a guy in his mid-30s now, and he’s fighting someone that is bigger than him and much, much younger in Teofimo.

Arum: Loma has never been trash talked before 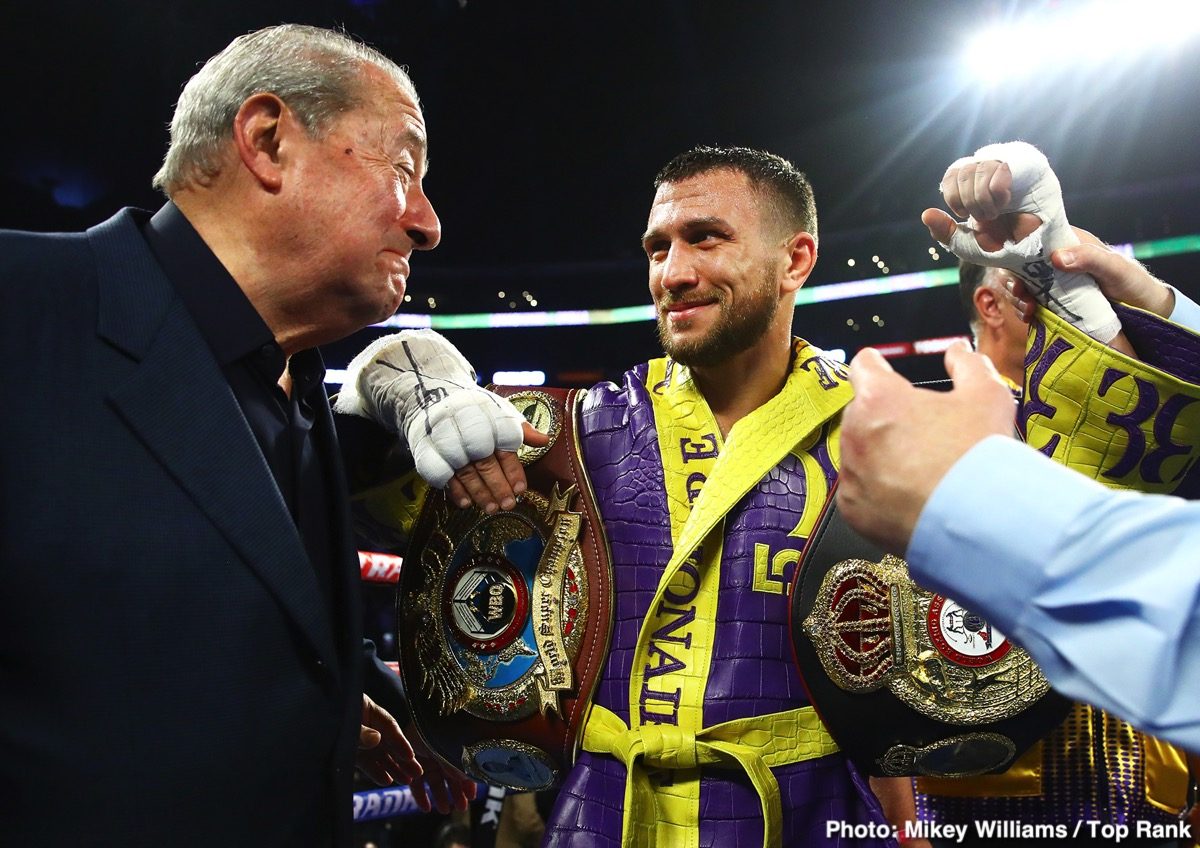 “This is the first opponent that he’s had who has done the trash-talking, so he wouldn’t be normal if he didn’t react,” said Top Rank promoter Bob Arum to The Ring.

“Lopez has been trash-talking, so this is something that hasn’t been done to Lomachenko, so obviously there’s a reaction.”

If Lomachenko fights anger, it’s going to give Teofimo a better chance of catching him with something and knocking him out. The way that Lomachenko normally fights puts him at serious risk of getting hurt. Thus far, Lomachenko’s opponents have lacked the one-punch power that Teofimo possesses.

For Lomachenko to take his normally reckless style of fighting to another level where he’s fighting with anger and a desire for vengeance against Lopez, it could be asking for BIG trouble.

If Lomachenko can’t calm himself down for this fight, then maybe he’s not the guy that boxing fan thought he was. They view him as having a super IQ, but a normally super brain fighter wouldn’t react with anger at being trash-talked by their opponents.

Arum often compared Lomachenko to a young Muhammad Ali in terms of technical ability. But can you imagine how a young Ali would have had Lomachenko furious if he’d been the one trash-talking him during the build-up to this fight? Obviously, Lomachenko is nothing like Ali. 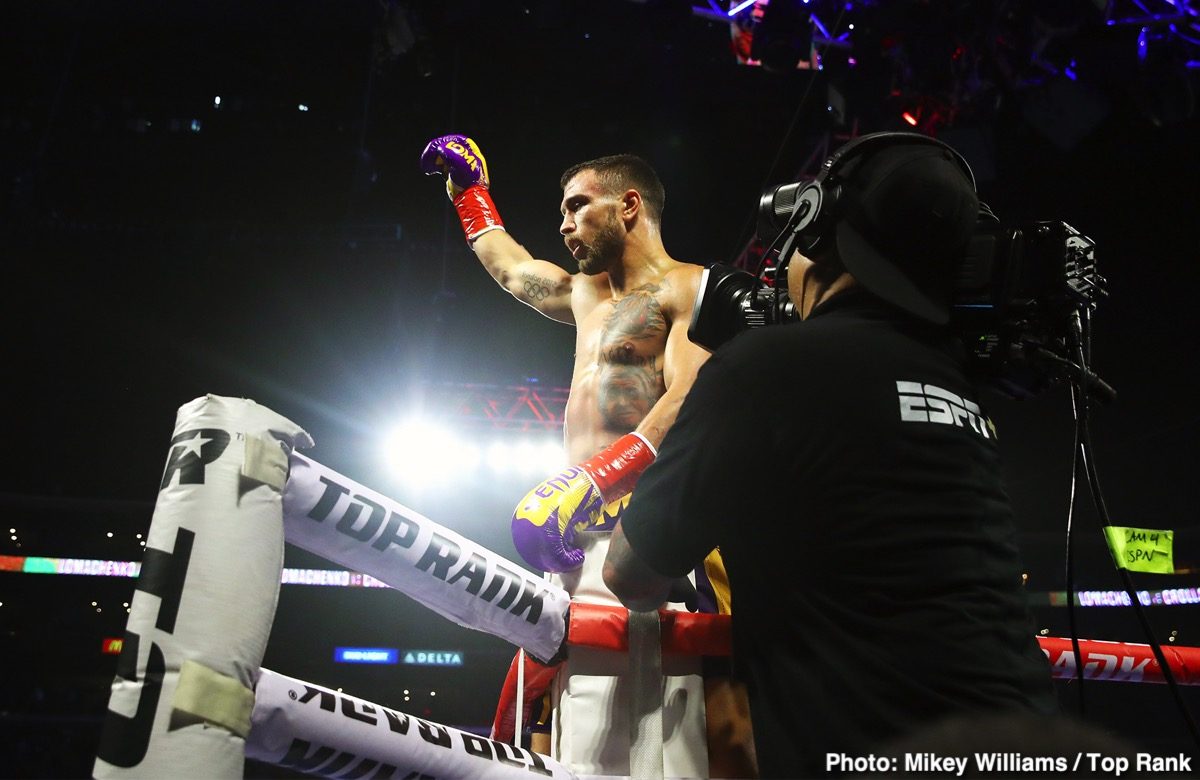 “Teofimo Lopez has the kind of explosive power that Lomachenko has issues with in taking it to the chin,” said Roy Jones Jr to Fighthub. “So we’ll have to see what Lomachenko can go into his bag and get to make himself deal with that explosiveness from Teofimo Lopez.

“He’s going to show why he is one of the top three of the pound-for-pound fighters today because he’s got to use every trick in the book to get past Lopez.”

“But he’s [Teofimo] young, he’s vibrant and he’s ready and that’s a dangerous combination. Loma, I think we know what we’re going to get with him. Lomachenko is going to come out, find his rhythm, figure out what’s going to work, and use it. So I don’t think the fight is more complex for Teofimo than it is for Lomachenko.

“Nope,” said Porter when asked if it’ll shock him if Lopez wins. “I do think he’s good. Shakur Stevenson is literally right behind him, not far off at all. They’re both very polished. There’s something about Teo. This fight against Lomachenko, I do like this fight up and down. I think it’s going to be a great fight,” said Porter.

The explosiveness of Teofimo makes him a real threat to beating Lomachenko, and we could see an upset on Saturday night.

It’ll be interesting to see how Bob Arum handles it if Lomachenko gets beaten by Teofimo. He’s been building Loma up for so many years; he might not be too pleased to see him losing to Teofimo. On the bright side, Arum will have a new star if Teofimo wins the fight, and he’s a heck of a lot younger than Lomachenko. 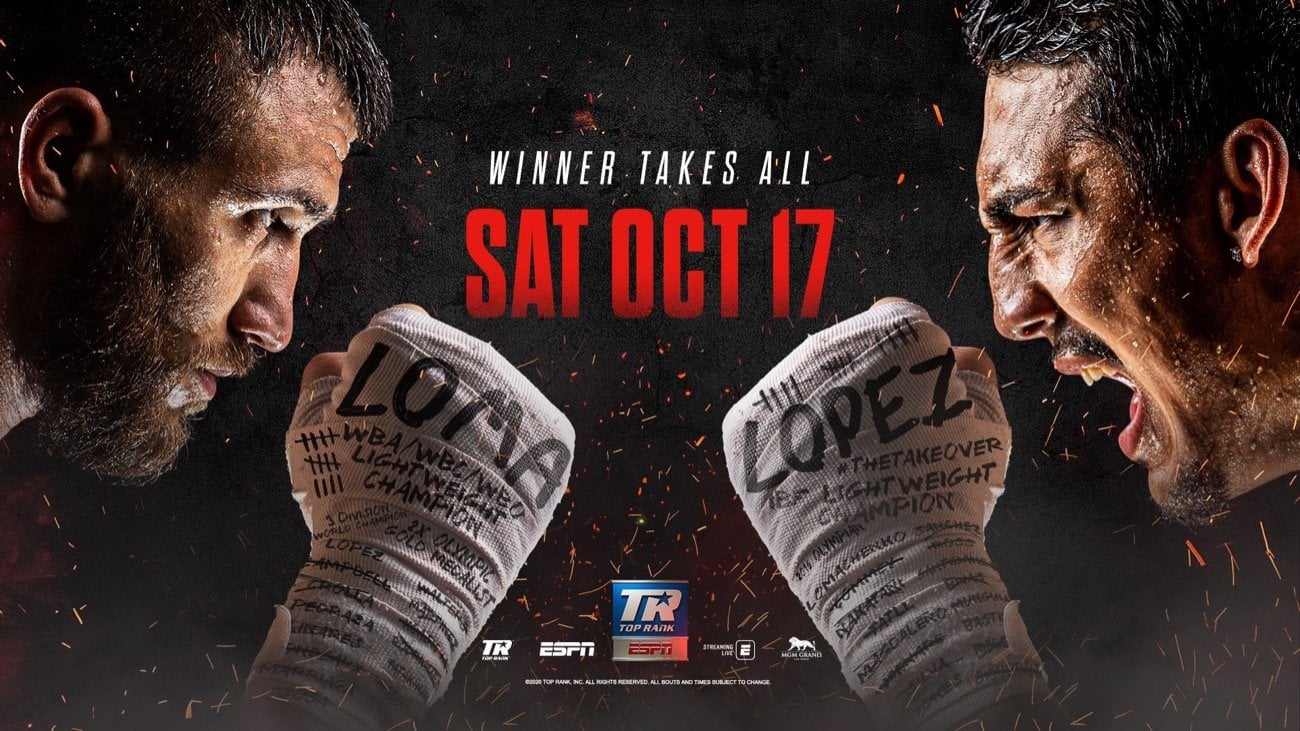 “I think it’s a very dangerous fight for Lomachenko because Teofimo has power, he’s a very difficult guy, difficult style, but come on, Teofimo is not like me,” said Jorge Linares. “Teofimo isn’t fast like me, he doesn’t have speed like me.

“He doesn’t have this too [brains]. He’s more of a hungry guy, and he wants to try and kill him [Lomachenko]. That’s it. So it’s not an easy fight for Lopez too because Lomachenko is a very smart guy, and very fast,” said Linares.

“I see it as a 50-50 fight,” said Leo Santa Cruz of the Lomachenko vs. Teofimo Lopez contest. “The only difference is, Teofimo is stronger, he’s more natural at that weight, he looks bigger, and I think if he catches Lomachenko, he could hurt and knock him out.

“Lomachenko is a great, skilled fighter. He’s really fast and if he doesn’t get caught and he throws his combinations, I think he can beat Teofimo by a decision. So it’s going to be a really, really and I want to see it already to see how it goes,” said Santa Cruz of the Loma vs. Lopez contest.

“I think Lomachenko has a little bit too much experience, but Teofimo doesn’t lack for experience. He was an alternate [in the Olympics],” said Vergil Ortiz. “He’s strong, he’s fast and he’s smart. I feel that Teofimo is going to try and take it to him, and Lomachenko is pretty good. He does that bull ring thing.”

Lopez’s size, speed, and power offset the ring IQ and the experience that Lomachenko has going for him. If Loma weren’t so worked up with the need for vengeance, he’d have a better chance of winning the fight, but no longer sounds like he’d got his head on right.

What Teofimo has revealed in Lomachenko is a person that is thin-skinned and who wants to be showered with compliments from his opponents. Now that Lomachenko has met someone that isn’t lowering himself to him, he’s stomping mad about it.