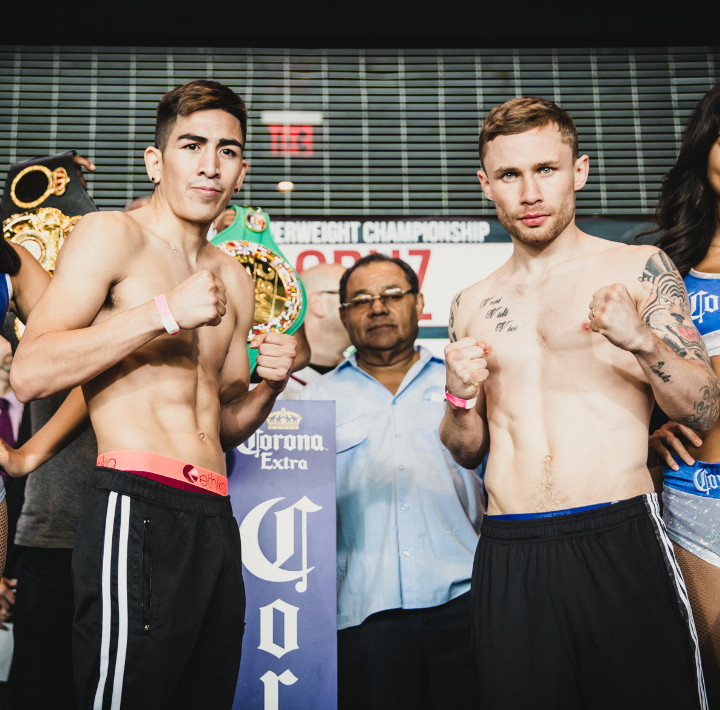 (Photo credit Amanda Westcott/SHOWTIME) This Saturday night undefeated pugilists risk their O’s in a classic style-matchup that continues the oldest argument amongst fight fans. Leo Santa Cruz made a big statement last August when he beat three-weight champion Abner Mares. His counterpart, Carl Frampton, comes in to this dual fresh off the heels of his most impressive win over previously unbeaten Scott Quigg. The Barclays Center will serve as a middle-ground of sorts with UK fans traveling across the pond and it being Santa Cruz’s first time in New York period.

A year ago this scribe, like many, favored Carl Frampton to outmaneuver Leo on his way to a clear victory. That was before each combatant’s had faced Mares or Quigg. Having seen the combination of Santa Cruz adding to his tool belt and Carl withering a bit down the stretch, has changed things.

It’s not as though Frampton has all of sudden lost his skill to operate on the outside. It’s a matter in which Scott Quigg decided to put his foot on the pedal thus taking over the action. Quigg did it with a broken jaw, an impressive feat by Scott that also reinforces Carl’s power.

What Santa Cruz displayed was a different layer to his game when he used his jab to create space, even stepping to the side using angles versus Abner Mares. Prior to the Abner victory, Leo’s act had run-thin and most hardcores had stopped paying attention due to a light schedule.

Heading into Saturday’s matchup the long arms of Leo and short limbs of Frampton is at the heart of the debate. Here’s the thing, Leo’s effort to close distance and hound Carl throughout the bout will effectively negate reach. There will be times in which Leo may have to take advantage of his length but not enough to be the main reason he wins or Carl losses.

For Frampton to get his hand raised he must stick to a smart game plan on the outside. That’s not to say at times he won’t need to stand his ground to gain the respect of Leo. Carl’s jab is quick and like most of his punches, very accurate. Enough so that he basically beat Quigg using it as a main weapon. The rest of his arsenal will likely be the overhand right and deadly uppercut.

The most important thing, beyond playing it smart, will be activity. No Carl doesn’t have to ‘pull for titles’ against Margarito 2.0, but he will have to do more than just pot shot. Two and three punch combinations in spots will ensure the judges he’s doing more than just landing a flashy punch.

Leo must do what he normally does and that’s put in work. To the head, to the body, shoulders, arms, and quite honestly the hips, all while using his jab and faints in order to distract Carl and get him off his plan. Both fighters will be in their comfort-zones so look for this to be a back and forth squabble.

Frampton will likely take an early lead with movement, hand and foot speed behind his jab. Carl must land two or three to Leo’s one and from time to time throw with Leo. Footwork and upper body movement together with busy work may force Leo to reach or follow.

After the hot start by ‘The Jackal’, look for Leo to take control working his way inside, attacking the body and head in effort to wear down his foe. Much the way Quigg had success versus Frampton, Leo will score to the body first and then land looping shots with both hands.

Each fighter is capable of hurting or dropping any opponent so it’s not crazy to think both men could be buzzed. Leo will begin to land the cleaner punches with less resistance coming from Carl, who fades down the stretch. Not quite calling for a FOTY but it will be highly competitive and hopefully entertaining as all get out.

My official prediction is Leo Santa Cruz my split-decision.

Side Note: Adonis Stevenson takes on Thomas Williams Jr. this Friday night on Spike. Both men have the power to score a knockout and neither have great defense. As long as it lasts it should be a barnburner. Also, to go along with the main event on Showtime, don’t miss a deep undercard filled with 4 bouts spread out between Showtime and SHO Extreme. Here’s a list Garcia vs. Rojas, Malignaggi vs. Bracero, Redkach vs. Farmer, & Redchenko vs. Harrison.