In a grueling fight, WBA secondary featherweight champion Leigh Wood (26-2, 16 KOs) had to get off the deck in the first round to come back and stop the talented two-time Olympian Michael Conlan (16-1, 8 KOs) in the twelfth round on Saturday night on DAZN at the Nottingham Arena in Nottingham, UK.

In the 12th round, Woods was getting worked over when all of a sudden, he hurt Conlan after trapping him against the ropes. Conlan then fell through the ropes and was unable to get back into the ring due to him being badly hurt. 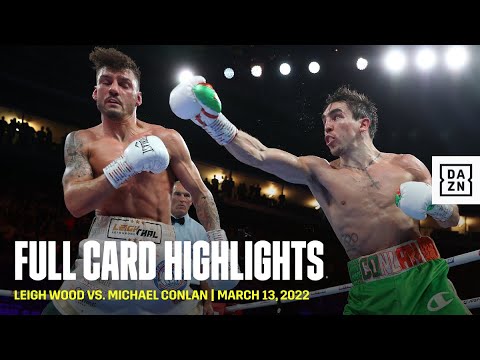 Conlan, 30, had Wood hurt countless times in the fight, staggering him repeatedly with left hands and giving him pure hell with body shots.

In the first round, Conlan dropped Wood hard with a big left to the head. Somehow, Wood was able to make it out of the round despite being badly hurt.

Conlan continued to hurt Wood in the second and third rounds with jarring left hands to the head, and hard body shots. 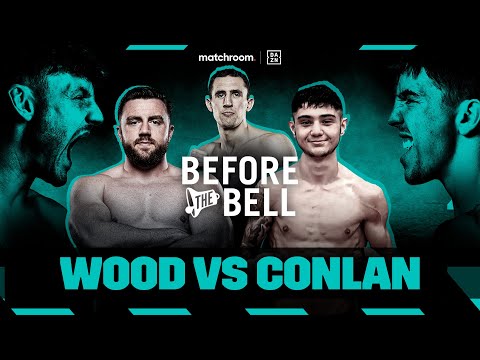 The talking is done

“I’ve been really looking forward to this one, and I’m ready to go,” said Michael Conlan to iFL TV. “There was the language barrier and I had no ill feelings towards Nikitin because he was always really nice,” said Conlan in comparing his rivalry with Wood with that of his match with Vladimir Nikitin in 2019.

“The talking is done, I’m here to fight,” said Conlan. “I wouldn’t have it any other way. The journey so far has been great. I’m ready to step on top and plant that flag, and I’m really looking forward to doing that.

“I rate him massively. It’s going to be a massive challenge. I’ve got to go in there and be the best Michael Conlan that I can be to beat Leigh Wood. Confidence comes from preparation. My preparation has been fantastic.

“I’ve been unbelievable during training camp. It’s been really, really good. I’ve worked my a** off. I do it in every camp, but something was different in this camp. It’s like that extra, we’re here now.

“Everything before that was like, ‘Let’s just get here and get it done, get it done.’ Every single minute, I’ve enjoyed this and I’m very excited. On Saturday night, it’s going to be a coming-out party for me, I think.

Conlan is ready to RIP Wood’s title from him

“People are going to start to take notice and go, ‘Wow, that was a performance.’ That’s how you box for a world title, that’s how you win a world title. You go to someone’s backyard and you rip it off and you do it in dramatic fashion and I will.

“If COVID wasn’t there, we would have been at this stage already. It stopped me because my next fight up before Covid would have been for a world title. Unfortunately, that didn’t happen, but now I’m here.

“Yeah, it probably should have happened before but everything happens for a reason. I’m here now at this point for a good but I think we’re going to see the best of me.

“It’s a 50-50 fight, and I’ve always shown that against the better opponent I’ve faced, the better I’ve performed, and I think we’ll see that. It’s always been that way. When the level raises, I raise even higher. When the level is low, my level drops a bit.

“It’s not the best thing to have, but it is what it is. I got here and I haven’t lost along the way. I haven’t dropped a level too low. I’m still in a good position, and now I’m going to win a world title on Saturday night.

“I’m in enemy territory. So, I want to win. I don’t want to lose to Matchroom, DAZN, or Leigh Wood. I want to win, and I’m promoted by Top Rank. That’s my promoters and I want to win.

“If I’m still with them or if I keep moving on after, fantastic. Yes, I want to beat Eddie [Hearn]. I don’t want him to have one over me. He probably could have signed me at the start, but he didn’t want to because I’m Irish. I’m only messing. It doesn’t really matter. It’s them against me.

“I’ve been treated lovely here, I’ve been treated fantastic, but I am the enemy. The business has worked out really well for me in this one, so I don’t really care. This is a dirty f****game.

“People that you sometimes think are your friends are not your friends, and that’s the way it is,” said Conlan about the sport of boxing.

“It’s 100% business. I’m here, I’m relaxed and enjoying myself. I’ve never felt so relaxed during a fight week, to be honest. I’ve always felt like, ‘I got to go do this and do that.’

“Michael Conlan becomes world champion,” said Conlan when asked to give a prediction on what happens tonight in his title challenge of Leigh Wood.

“It’s as simple as that. Whether it’s a stoppage or whether it’s points, it does not matter to me. I will win,” predicted Conlan.

Wood (25-2, 15 KOs) recently captured his WBA ‘regular’ 126-lb title with a 12th round stoppage over champion Can Xu last July at the Matchroom headquarters in Brentwood, Essex.

It was a great performance by the 33-year-old Wood, who if fights like that tonight, he’ll make it tough on the two-time Olympian Conlan (16-0, 8 KOs.