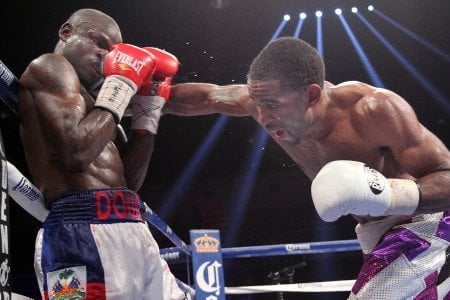 In between the main and co-main event of the evening, world champion Adrien Broner sat down with SHOWTIME host Brian Kenny for an in-depth interview following his December loss to Marcos Maidana.

Peterson (32-2-1, 16 KO’s) and Jean (25-1, 17 KO’s) kicked off the 2014 boxing calendar with an action-packed aggressive showdown. Jean began with a patient approach, looking to test the chin of Peterson after his devastating knockout loss last May against Lucas Matthysse. By midway through the fight Peterson made it clear that loss had no affect on him as he became the aggressor, putting on a show for his hometown crowd. As the fight progressed Peterson outworked and outlanded his opponent using combinations, speed and agility. At the end of the fight SHOWTIME Sports analyst and former World Champion Paulie Malignaggi emphatically stated, “Lamont clearly proved that he is still a force to be reckoned with at 140 pounds.” The judges scored the bout 115-113, 116-112 and 118-111.

After the fight Peterson said, “I knew that this was his [Jean’s] first title fight and this is a big stage. I knew regardless of what he said he would have some type of nerves. At the end of the day I was in shape and I was able to hold the rounds. I would like to be considered the best 140-pound fighter in the world before I leave [the division]. If it means Danny Garcia is next then that’s what it is.”

When asked how long it took to get over his loss against Matthysse, Peterson said, “At the end of that night I sat and thought all night and I came to an understanding of why I lost. Then I moved on. I was over it in 24 hours.”

When asked about the loss, Jean chalked it up to the inexperience of this being his first title fight saying, “I think it is just a matter of experience. Life goes on you know. I am definitely leaving with my head held high. I have all of my fans with me and I fought a hard fight.”

Charlo (23-0, 11 KO’s) of Houston, Tex., who took a step up in opposition with his fight against Philadelphia’s Rosado (21-8, 13 KO’s), maintained his composure despite immediate pressure from his opponent. In the fifth round, a cut appeared over Rosado’s left eye. Referee Maleek Waleep ruled that a punch did cause the cut however the SHOWTIME replay showed it was caused by an accidental head butt. While the fight continued, Rosado clearly was bothered by the cut. Charlo smothered Rosado’s offense and kept him off of his game plan. Charlo rose to the occasion and won the fight via unanimous decision. The judges’ score totals were 97-93, 99-91 and 100-90.

Speaking about the cut, Charlo said, “Once I saw the eye leaking, I told myself let’s finish this eye up and see what the doctors do. I told you if his eye holds up, we are going to get some work in.”

Rosado also addressed the cut saying, “It’s kind of like my Achilles heel. It’s really tender so it just gets cut early. It is what it is. I am kind of… it’s disappointed. I am forced to fight this way, aggressive. Charlo boxed a good fight but it’s a little frustrating that I have to fight a different style. I have to fight aggressively [because of the judges]. It’s crazy because I didn’t get a round.”

Peterson vs. Jean, a 12-round fight for Peterson’s IBF Junior Welterweight World Championship, took place Saturday, Jan. 25, at the DC Armory in Washington, D.C. The event was promoted by Golden Boy Promotions and sponsored by Corona and AT&T.