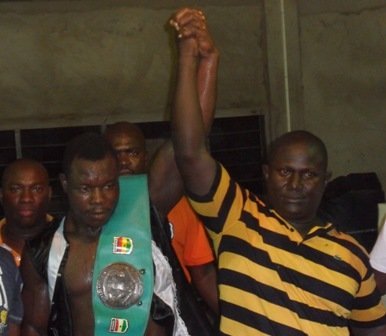 By Prince Dornu-Leiku – Emmanuel Omari Danso, the Ghana-based boxer known by the nickname Kwahu Tyson has realized the first of many ambitions after claiming the vacant Ghana Light Heavyweight championship with victory over David Okai.

Unbeaten Kwahu Tyson (16-0, 16 KOs) has vowed to live by his American namesake, Iron Mike Tyson and destroy opponents on his way to achieving the much craved dream of becoming boxing world champion.

Boasting a 100% knockout record from the 16 fights of his career thus far, Danso was at his destructive best even as Okai took him the furthest in his career before eventually succumbing in the penultimate round. Danso claimed the national Light Heavyweight belt via the 11th round technical knockout win against Okai at the Will Power Boxing Complex in Accra.

It also improved perfect record holder, Omari Danso to a number 2 in the African Light Heavyweight rankings but his team are patient to let him develop before thinking of taking on the best in the world.
“Locally there is no opponent again for him because he has beaten them all so maybe we shall look for opponents around the neighbouring countries like Nigeria, Benin, then go for the Africa title next year

We have no doubt he has all the ability to go for a world title even today but we are not rushing. We are looking at this long term so we are patient,” Coach Ofori Asare, trainer of Kwahu Tyson told the Ghanaians website www.sportsinghana.com at ringside.

Backing both trainer and boxer is Kwame Acheampong AKA To Be who is Manager of Emmanuel Danso. Acheampong has pledged to give all the support necessary for Kwahu Tyson to become world champion.

“I know he will become a world champion, I have no doubt and I assure him of my very best support all the way. But nothing comes easy that’s why he must train so he will make everyone proud,” said Mr. Acheampong famous around the Kantamanto business hub in Accra as To BE.

He added: “When he does it, it’s not for me, it’s not for the coach but Ghana. We will give him all the support, all he has to do is to devote more time to training and improvement everyday and listen to the coach. He is a raw, good talent.”