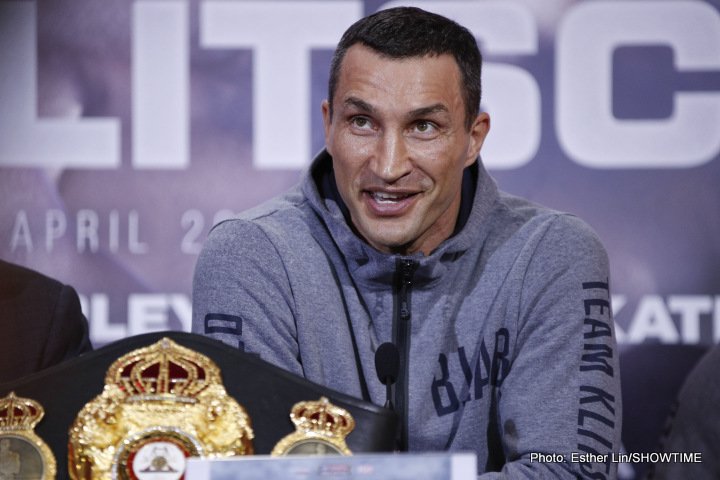 Former heavyweight king Wladimir Klitschko is currently out on Abu Dhabi, and the soon to be 44 year old made it clear, when speaking with The National, that he has NO plans to make a comeback. Wladimir said he is busy with his life and has no plans whatsoever to make a return to the ring.

But then, when pressed on the subject further, Klitschko said, somewhat oddly considering his earlier firmness, that if he did come back “it would not be to break a jaw but to break a record.” So just maybe Wladimir has not exactly bolted the door on a comeback.

But Klitschko was keen to speak about the upcoming return fight with Tyson Fury and Deontay Wilder. Klitschko has boxed both – Fury for real, going down on points on 2015 to lose the crown in that big upset, Wilder in training camp some years back. And Klitschko said he actually hopes Fury can get the win on February 22.

“Either Wilder is going to get the knockout or Fury is going to win on points,” Wladimir said. “Personally, I respect Wilder a lot. He was in my training camp – we spent rounds together in the ring. He’s a great guy and a fabulous boxer. As many Knockouts as he has, you’ve probably no-one else, in current times, at heavyweight, including me.

“I wish that Fury, believe it or not, might make it. It could be good for the game if Fury won – it could open a lot of doors in terms of excitement.”

Fury has of course predicted a quick KO win, in the second round. Not too many fans seem to be willing to take this prediction without adding a large pinch of salt to it; with most agreeing with Wladimir, in that it will either be a Wilder KO or a Fury decision.

Klitschko obviously respects Wilder’s punching power (as does David Haye, who also sparred Wilder; recently saying how no man ever hit him as hard as Wilder; which is very interesting considering Haye fought Wlad), but he is as he said pulling for a Fury win.

Who’d have thought that!

Still in terms of KO wins achieved, Klitschko, during his long career, sure scored an impressive number of them. In fact, Wladimir has got more on his record than Wilder currently has at 41. Can Wilder get another KO a week on Saturday?