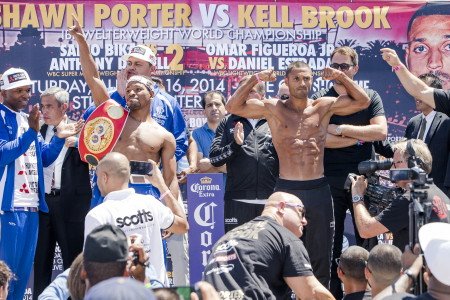 Marquez’s promoter Fernando Beltran told ESPN last week that Marquez would like to face the winner of the Brook-Porter fight in Mexico in order for him to try and capture a 5th division world title. That doesn’t look like it’s going to happen if Porter successfully defends his title tonight against Brook.

Ken Porter says he would be interested in a Porter vs. Marquez fight, but he would prefer that it take place at the MGM Grand in Las Vegas, Nevada on pay-per-view. Fighting Marquez in Mexico is no something that Porter wants to do, because it would give an advantage to Marquez.

“None of that sounds advantageous to Shawn, Ken said to Thaboxingvoice. “It’s not an advantage to go to Mexico and fight a former Multiple time world champion. That fight for me sounds like the MGM Grand [in Las Vegas, Nevada] and it sounds like PPV, so that’s where my interests would be MGM Grand and PPV.”

Porter vs. Marquez isn’t really a PPV type bout in the U.S. If Top Rank and Golden Boy tries to make that a PPV bout, it’s likely to bring in poor PPV results because Porter isn’t a star in the U.S, and Marquez hasn’t proven that he can bring in a lot of PPV buys unless he’s matched against Mayweather or Pacquiao.

There’s an outside chance that Brook might be interested in facing Marquez in Mexico this year if he wins the IBF title tonight, but even that would be a real stretch. Brook’s promoter Eddie Hearn wants to match him up against Amir Khan if he beats Porter tonight. That would be a huge fight in the UK for later this year in November or December.

Brook-Marquez wouldn’t be nearly as big as Brook-Khan. Brook also is interested in facing the likes of Floyd Mayweather Jr and Manny Pacquiao. Hearn will likely be looking to make a fight against either of those guys before he’d even think about fighting Marquez.

Marquez is coming off of a 12 round decision in over Mike Alvarado last May. Before that, he was beaten by former WBO welterweight champion Tim Bradley by a 12 round split decision.