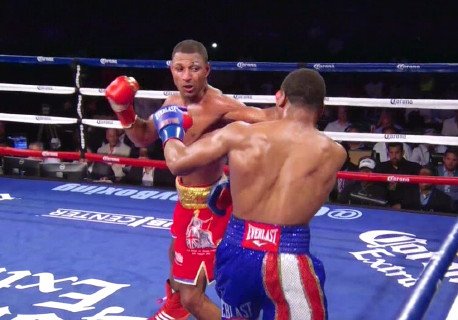 Dominic Ingle, the trainer for IBF welterweight champion Kell Brook (33-0, 22 KOs), doesn’t want him to take his career backwards for his first title defense on December 6th in Sheffield by taking on an easy opponent.

Ingle wants Brook to face a high level opponent because he sees that in helping him get ready for one of the bigger fights like Amir Khan or Floyd Mayweather Jr.

The knock on Brook is he’s spent most of his 10-year pro career fighting tune-up type bouts. Last Saturday, Brook finally fought a good opponent in Shawn Porter, and he was able to somehow get the victory by nullifying Porter’s offense on the inside with frequent clinching.

Ingle doesn’t want to see Brook facing nothing but the best opposition from this point on in his career. However, Brook’s promoter Eddie Hearn is the one that makes the matches for him, not Ingle, and Hearn is interested in finding a fairly easy mark for Brook like Brandon Rios, Andre Berto, Robert Guerrero or Josesito Lopez. Those are the four names Hearn is mentioning as a possible opponent for Brook to fight on December 6th.

“Kell fights again in December. There’s no point in him having a lesser opponent than Shawn Porter for the next fight because once you get to the next level like Kell has, it’s what motivates you. Kell gets up for big fights,” Ingle said to espn.co.uk. “If you gave him an easier fight he’s likely to take the foot off the gas. It needs to be a decent threat-level for Kell.”

It’s not too realistic that Hearn is going to put Brook in with a top guy like Ingle wants him to though. Hearn said yesterday that he thinks Keith Thurman would be a tough fight for Brook, and that Devon Alexander would be too messy because of his style. He wants someone that will make Brook shine, and that means a fairly easy mark.

Rios isn’t ranked in the top 15, and neither is Josesito Lopez and Andre Berto. You can’t call them top names. Hearn is looking for a guy with a recognizable name to the U.S boxing public, and at the same time someone that he knows Brook will look good against. He’s not looking for a top guy like what Ingle wants, unfortunately.

A high level opponent would be good for Brook to fight because it would potentially boost his ego if he were to beat someone at that level. But it doesn’t look like Hearn has the same kinds of ideas that Ingle has when it comes to matchmaking.