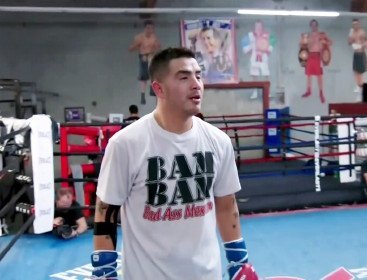 One of the worst kept secrets in boxing over recent weeks has been that Britain’s IBF 147 lb champion Kell Brook is set to defend his belt against American brawler Brandon Rios sometime later this summer – most probably on the 29th August in Brook’s home city of Sheffield or on September 12th at London’s O2 Arena.

While Brook himself has been noticeably quiet over the rumors, Rios and trainer Robert Garcia have been quite the opposite, with both vocalizing their discontent regarding negotiations for the contest, citing money and Rios being unable to use his preferred Everlast MX gloves as potential sticking points.

However, in his latest chat with fighthype.com, Brandon’s promoter Bob Arum has suggested that the fight is essentially all but a done deal and negotiations with Brook’s promoter and management team have gone well.

“I’m optimistic we could have an announcement as early as next week. We’re getting very, very close to making that fight.”

And as if it weren’t already obvious, Arum then appeared to confirm what British fans already know. That Brook v Rios is set to be the headliner of the next big Matchroom PPV card.

In fairness, if it’s as good as the last one – and follows along in that vein of competitive fights, then I’m sure people will cough up – begrudgingly, for some however.

On how such a fight will benefit Rios, Arum said;

“It’s a big showcase. It would be at the O2 Arena in London, (with) a huge crowd. It’d be on PPV in England – it’d be a major, major bout. I give Brandon a hell of a shot. Kell Brook’s a talented fighter – but even if Brandon lost the fight, he’s gonna get a big payday and he can (try to) cover himself in glory.”

Sounds confident about his fighter’s chances, don’t he? I think most people can see that Brook should have far too much for Rios, especially at this stage of the American’s career – and I believe Rios and his team know it deep down, hence all the complaining about money, gloves etc.

However, he’ll be a live underdog for sure in there and the fight is one that will certainly appeal here in the UK. I expect Brook to wear down and pick off a persistent Rios for a wide decision or possible late stoppage.

I look forward to the official announcement.