Keith ‘One Time’ Thurman says he’ll be back in action in action in eight or nine months to fight in May or June of 2020. He says he wants a rematch with Manny Pacquiao, and he maintains that the second fight will be different with him improving on the mistakes he made in his loss to the Filipino star last July. Thurman wants to win back his WBA 147-lb title that he lost to Pacquiao on July 20 in losing 12 round split decision.

Pacquiao could be facing Mikey Garcia in the first quarter of 2020. He’s not expected to return to the ring until then. Former WBA/WBC welterweight champion Thurman says he likes the choice of Mikey (39-1, 30 KOs) for Pacquiao, because he would have a tough time fighting the “top dogs” Errol Spence Jr., Shawn Porter and himself.

“June probably; late May or June,” said Thurman when asked when he’ll be returning to the ring. “I just want to be back in the ring. It could be anybody. You know what I want. I want that rematch [against Manny Pacquiao]. That’s what I want. We’ll have to see what happens, you know. I think that’s not a bad opponent for Manny Pacquiao,” said Thurman when told that Manny could be facing Mikey Garcia next.

A rematch with Pacquiao might not be in the cards for Thurman, because Manny is about to turn 41 in December, and it’s believed that he only has two fights left before retirement. If one of the fights is a match against Mikey, and the other against the Spence-Porter winner, then Thurman will be out of look.

Thurman’s ego is obviously hurt from his disappointing loss to Pacquiao, but he’s just going to have to get over it and move on. There’s no point in Pacquiao going over old ground by fighting Thurman again. He already proved a point that he’s better than him. What Pacquiao doesn’t need to do is get locked into giving Thurman endless rematches so that he can eventually get it right.

Pacquiao has to “tread lightly” among top welterweights says Thurman

“He’s got to tread lightly among this welterweight division,” said Thurman. “There’s a lot of dog fights in this division, even though he stepped away with my belt. It’s okay. He knows he was in a dog fight, and he wants to go up against more young dogs like Shawn Porter, Errol Spence, and Keith Thurman rematch.

“I think every single one of those guys would be danger. But Mikey Garcia might be the least dangerous, and still the most respectable opponent, but still young, strong and hungry. So we’ll see,” said Thurman.

This is a valuable piece of advice Thurman gave Pacquiao about treading lightly. When it comes to Spence and Terence Crawford, Pacquiao should tread lightly, because those guys are a cut above. But as far as Mikey Garcia, Shawn Porter, Thurman and Danny Garcia, Pacquiao can stride through those guys without too much worry. Porter is about to be eliminated from the Pacquiao sweepstakes on Saturday when he faces Spence. Mikey Garcia is a different case. Yeah, he was whipped badly by Spence last March, but he’s still very popular, and he would bring a lot to the table in a match against Pacquiao. So would Vasiliy Lomachenko, but Pacquiao probably wouldn’t fight him unless he moved up to welterweight. Manny isn’t going to drop down to lightweight to accommodate Lomachenko.

“Maybe utilize a little bit more of my movement, and some of my counters,” said Thurman when asked what he would do differently in the rematch with Pacquiao. “He didn’t like my boxing. Head movement. There were certain things that frustrated him. There were openings that I didn’t take advantage of in the moment. If I had a second chance, I wouldn’t hesitate. There would also be some uppercuts,” said Thurman about what he would do in Pacquiao rematch.

Thurman’s ability to handle body shots will be just as much of a problem in a rematch with Pacquiao as they were last July. Keith just can’t take it to the body for some reason. Thurman is talking about what he’ll do differently, but you can bet Pacquiao’s trainer Freddie Roach will have him focused 100% at targeting Thurman’s body. Thurman won’t last long against Pacquiao in the rematch if he throws to the body with the majority of his shots. 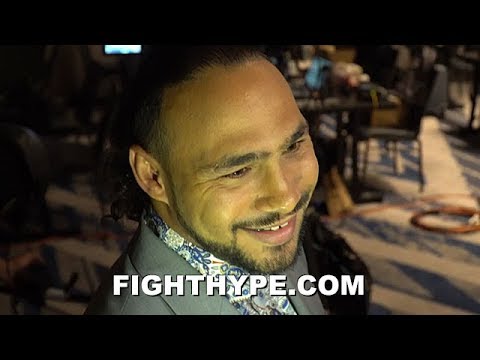