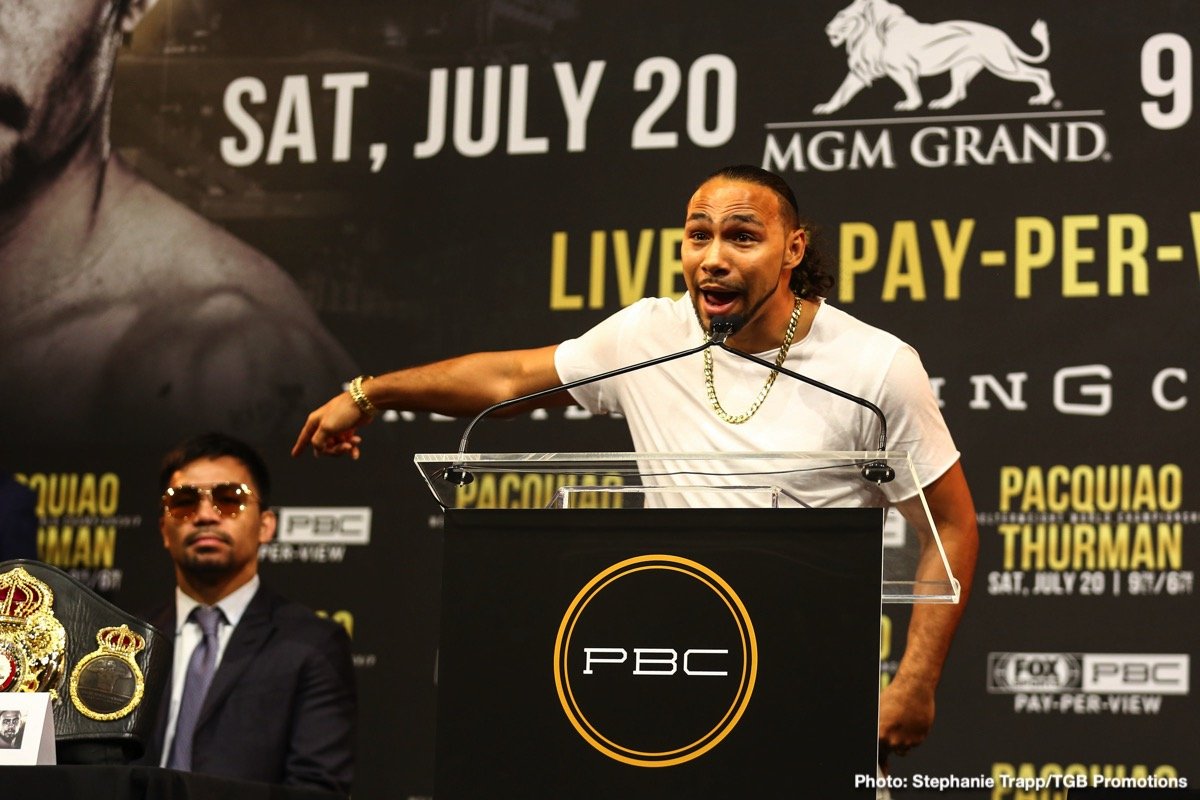 WBA welterweight champion Keith Thurman says it is a dream come true, an honour even, to be fighting superstar and all time great, Manny Pacquiao. Yet Thurman insists he will have the honour of not only beating the fighting senator on July 20th in their Las Vegas (we hope) super-fight; but that he will retire Pac Man from the sport.

“Come July 21, he’s gone,” Thurman vowed at yesterday’s New York presser. Clearly, Thurman is confident, and as he is the younger man by just over a decade, it’s not that hard to see why, nor is it hard to see why he has opened as the betting favourite to win. But Thurman is not fighting a ‘normal’ 40 year old. No, in the quite incredible Manny Pacquiao, Thurman is fighting a very special fighter; a man who just might be the best conditioned, fastest and most well preserved 40 year old welterweight in the history of the sport.

And we must not forget that, despite being so much older than Thurman, Pac Man has been the more active fighter of the two; Thurman having had just one fight since March of 2017, Pacquiao having had three fights during that time (one loss, the debatable decision defeat at the hands of Jeff Horn). And Thurman has, for such a young guy, suffered his fair share of career injuries – more than Pacquiao has had to endure over the last three years or so.

Could it be Thurman who winds up being retired – either during the fight, on his stool, or after the fight, with him losing it? It’s possible. Thurman has not looked good for quite some time, labouring as he did to defeat Josesito Lopez in his last fight, his comeback fight. Pacquiao, amazingly, seems to have more left than Thurman, at least when going by the most recent performances of the two fighters. Certainly there’s nothing to suggest Pacquiao is going into his last fight, one he has next to no chance of winning.

Thurman had better hope he is 100 percent fit when he enters the ring with Pacquiao, and he better hope he stays that way during the full course of the action. A Thurman with an injured hand or shoulder would very likely find himself living a nightmare of a Pac Man fight; one he would not win. It might well be Pacquiao who walks away from the ring with a win on July 20, not a walk into retirement.

No way does Pacquiao quit on his stool. Thurman would have to score a KO or pound out a one-sided decision win to quench the fire that still burns inside Pacquiao. Can you really see either scenario unfolding? On the other hand, would Thurman be able to come back from a humbling loss to an ‘old man?’ July’s fight really is a fascinating match-up.