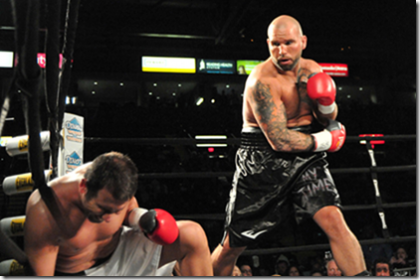 Before a raucous crowd of almost 5,600 patrons at the Santander Arena in Reading, PA, WBA number-10 ranked Heavyweight Travis Kauffman destroyed late replacement Jason Barnett inside of one round to capture the WBU Intercontinental championship.

Kauffman came out and boxed well until he landed a crushing body shot that sent Barnett down to his knees. Barnett got up but not for long as a right to the head sent him down for a second time. Barnett would get to his feet but a barrage of punches sent Barnett for a third and final time and fight was stopped 2:09 into the contest.

With the win, Kauffman is now 27-1 with 20 knockouts and 28 year-old native of Reading will now look for a big fight.

Barnett of Clearwater, Florida stepped in on just five days notice after Manuel Quezada failed to turn in the proper work, drops to 14-15.

In the exciting co-feature, Frankie De Alba scored three knockdowns en route to a fourth round stoppage over Osnel Charles in a scheduled eight round Lightweight bout.

De Alba dropped Charles in round’s two, three, and four and landed many more hard shots during the bout. Charles gave as good as he received but the power of De Alba proved to be too much as the bout was finally stopped at 57 seconds of round four.

Evincii Dixon dropped Rafael Montalvo in round three and scored a six round split decision in their Welterweight clash. Scores were 58-55 and 57-57 for Dixon while a 3rd judge some how saw it 60-55 for Montalvo.

Emil Rodriguez and Travis Thompson battled to a spirited and crowd pleasing four round draw in a Lightweight battle.

Khalib “Big Foot” Whitmore of Philadelphia remained perfect by scoring a 1st round stoppage over Mark Baltimore in a Light Heavyweight battle.

Randy Easton opened the show with 43 second destruction over William Monroe in a scheduled four round Heavyweight bout.