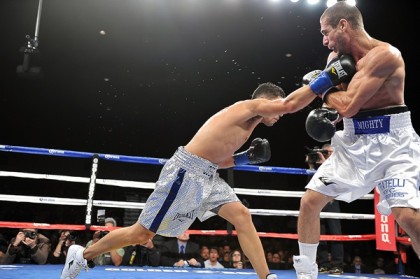 Photo: CARLOS BAEZA – Welterweight Josesito Lopez (31-6, 18 KO’s) looked like a shell of his former self tonight in struggling badly to defeat journeyman Mike Arnaoutis (24-10-1, 11 KO’s) by an unimpressive 8th round technical decision caused by a head-butt in the 8th round at the Fantasy Springs Casino, in Indio, California, USA.

Arnaoutis banged heads with Lopez in the 8th, causing a wide cut over the side of Arnaoutis’s left eye. He had already suffered a small cut over his right eye earlier in the fight, but that one wasn’t as bad as this one. Arnaoutis told the ringside doctor that he couldn’t see out of his left eye, and the fight was then stopped. The judges scored it 77-74, 77-74, 76-75.

Lopez took a lot of shots in this fight, and he’s quite fortunate that Arnaoutis had no power to speak of because it’s easy to imagine that Lopez would have been stopped in this fight with the way that his head was swinging violently each time Arnaoutis would land a shot.

The fight was pretty close until the 8th round when Lopez finally had a good round after many in which Arnaoutis seemed to dominate. it was slow and methodical domination from Arnaoutis with him landing jabs and straight left hands to the head of Lopez. Occasionally, Arnaoutis would land a nice left uppercut that would stop Lopez in his tracks.

I don’t know where Lopez is going to go with his career, but he doesn’t look like he’s got what it takes to beat the top guys at 147. I think Saul “Canelo” Alvarez and Marcos Maidana took something out of him in stopping him.