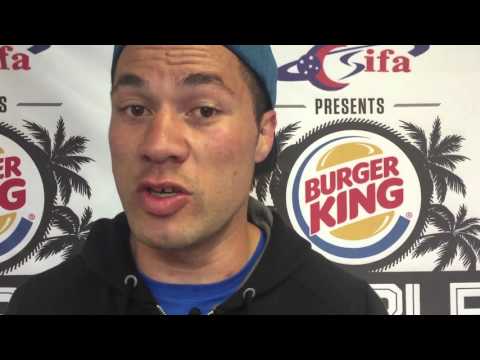 Unbeaten New Zealand heavyweight hopeful Joseph Parker celebrated being moved to number one by the WBO in their updated rankings by immediately calling out fellow unbeaten prospect, Brit, Anthony Joshua.

Joshua is currently ranked number two by the WBO and a fight between the two would see the winner become the mandatory to take on current champion Tyson Fury.

Many seasoned observers in the sport have tabbed both Parker and Joshua as the future big names in the heavyweight division and while a fight between the two is realistically a minimum of twelve to eighteen months away for the first time in recent weeks both fighters have publicly acknowledged each other as distant drums begin to beat for this fight.

Footage on YouTube recently surfaced with Joshua stating that Parker was welcome to ‘come and get it.’
Parker has been quick to respond with a message of his own, “Anthony I am not scared of you.  You said when we get together someone is going to get knocked out.  Guess what, it is not going to be me.”

Both fighters boast impeccable records, Parker with an 18(16)-0 record while Joshua sports an equally destructive 15(15)-0 record and yet to face an opponent that can take him the distance.

Ultimately picking a winner to this fight depends on what you prefer, whether it be Parker’s speed and output or Joshua’s size and power. Either way the heavyweight division could well see a super fight between the pair in the making as the tentative first shots are fired across the respective bows of both fighters.

Add already established fighters and current champions Tyson Fury and Deontay Wilder into the mix along with perennial heavy handed challengers Alexander Povetkin and Luis Ortiz and there is no denying that the heavyweight division just got interesting. Should Parker and Joshua remain on their winning ways a fight between the two could represent an apex in this current renaissance.