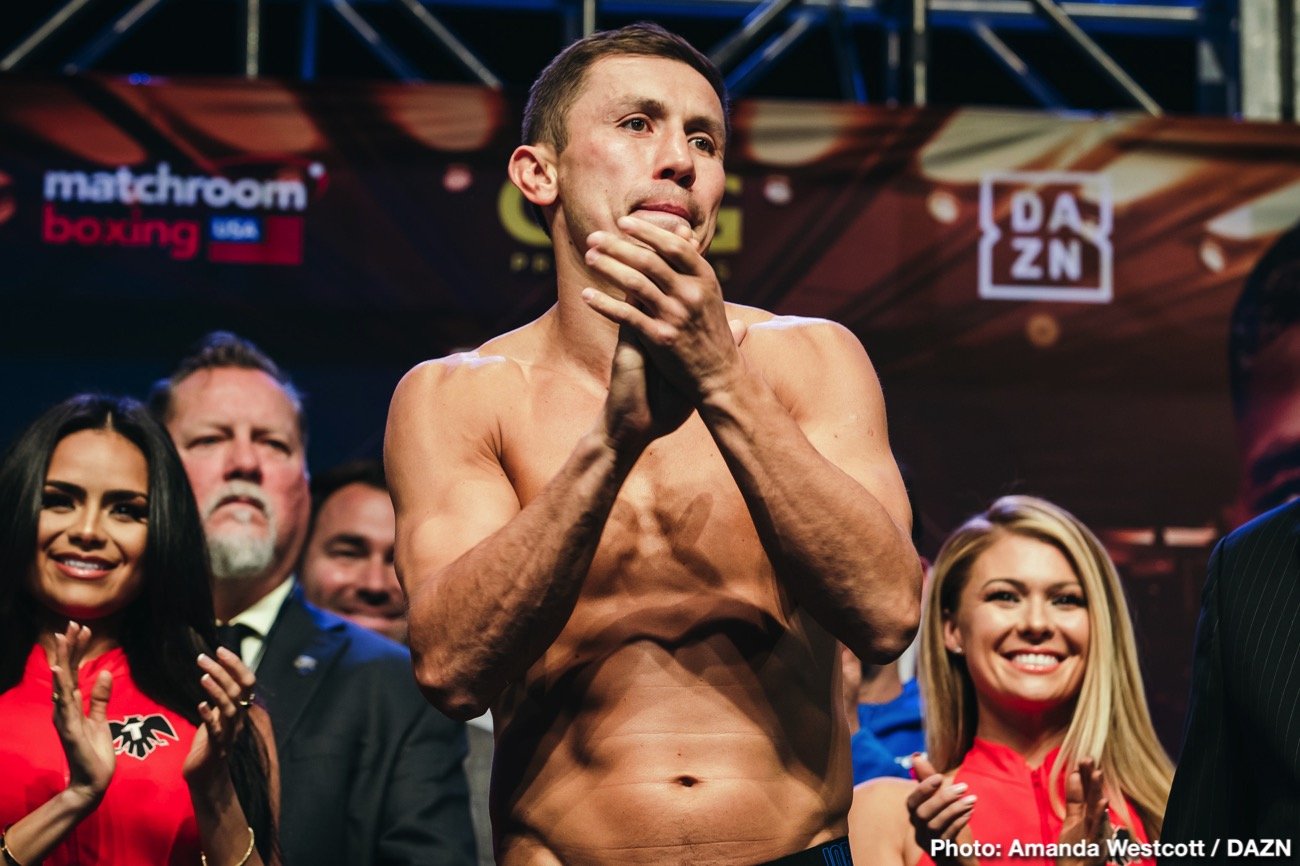 Gennady Golovkin will be fighting tonight against Sergiy Derevyanchenko in hopes that it leads to a trilogy bout against superstar Saul Canelo Alvarez in May 2020. However, Golovkin’s trainer Johnathon Banks doesn’t have much hope of Canelo taking the fight with GGG.

Golovkin thinks Canelo ‘ran away” from their trilogy fight. Canelo is currently scheduled to face WBO light heavyweight champion Sergey Kovalev on November 2 on DAZN at the MGM Grand Garden in Las Vegas, Nevada. If this was 2015, Canelo’s move to face Kovalev would be considered a big deal, and a show of bravery on his part. Not anymore.

Kovalev has lost 3 fights in the last 3 years, and he’s considered the weakest link among the 4 light heavyweight champions. So instead of Canelo looking brave for selecting Kovalev, he’s viewed as a ‘cherry-picker’ by many boxing fans for failing to take on the dangerous 175-lb champions. We’re talking these guys:

Banks believes that Canelo is waiting Golovkin out until he’s older before he finally faces him in a third fight. Moreover, he feels that the huge $365 million contract that DAZN gave Canelo recently has changed his outlook on wanting to unify the middleweight division.

Golovkin (39-1-1, 35 KOs) takes on Derevyanchenko (13-1, 10 KOs) tonight for the vacant IBF middleweight title on DAZN at Madison Square Garden in New York. GGG needs the IBF title as a bargaining chip to get the Canelo fight. Without that belt, Golovkin has no way of pressuring Canelo to fight him.

If the Golden Boy star is reluctant to fight Golovkin as Banks says, then winning the IBF title tonight is a must. This is no sure thing win for Golovkin. He’s fighting a highly skilled 2008 Olympian in Derevyanchenko, and he’s motivated to win Derevyanchenko hasn’t tasted the big money that Golovkin has, and this is his chance tonight to set himself up for a potential big payday against Canelo.

“Canelo will fight GGG after his 65th birthday,” said GGG’s trainer Banks to TheRingDigital. “Any day after that, he’ll fight him. Some people can say I’’m wrong, some will say don’t say that, but what else can you say? What other excuse can you give me? Did Canelo whoop him easy? No. Were both fights easy? No. Were they the hardest fights of Canelo’s career? Yes.

DAZN giving Canelo a huge contract has changed him

He [Canelo] said he wanted to be undisputed [middleweight champion], and DAZN say, ‘Take this $300-$400 million,’ and he said now, ‘I don’t need to be undisputed now. Look at the money.’ So that’s what it is,” said Banks in giving his theory on why Canelo Alvarez isn’t interested in fighting Golovkin again.

With the huge $365 million contract that DAZN gave Canelo, you can argue that it relieves the Mexican star from the pressure of having to fight certain guys like GGG. If Canelo had to fight the best every time in order to bring in the most amount of PPV money, then it’s hard to imagine him choosing not to fight Golovkin a third time.

Giving a fighter a huge contract without it being written into the contract that he has to fight certain guys, it leaves the the freedom to whoever they want. As such, Canelo has fought Rocky Fielding and Daniel Jacobs. Fielding was considered the weakest link at 168 in the view of many boxing fans at the time Canelo fought him. Kovalev is arguably the light heavyweight division’s version of Fielding in terms of being seen as the weakest link among the 4 champions.

“My alternate goal is to get him back winning,” said Banks about his secondary goal or Golovkin for his fight tonight against Derevyanchenko. “That’s really what I’m all about. The whole goal is for GGG to win. I take it one fight at a time. I need him to look good. Winning and looking good goes hand in hand for me,” said Banks about Golovkin. “I want him to be able to out-box his opponent, and knock him out. So I want it all,” said Banks.

Golovkin already won his first fight with Banks as his trainer against Steve Rolls last June, so he’s already winning once again. Beating a quality fighter like Derevyanchenko will be a lot tougher. If Golovkin wins impressively tonight, then he’ll show that he’s still one of the elite level middleweights in the division. You can bet that Canelo will be watching the Golovkin-Derevyanchenko fight, because he could be facing the winner of the contest in 2020.

If Derevyanchenko wins the fight, it’s very likely that Canelo will move quickly to face him next year. That would be a straightforward type of fight for Canelo. The guys that Canelo hasn’t shown interest in fighting at 160, in terms of the world champions, is Demetrius Andrade and Jermall Charlo. Those two would be bad match-ups or Canelo due to their size, and boxing skills.