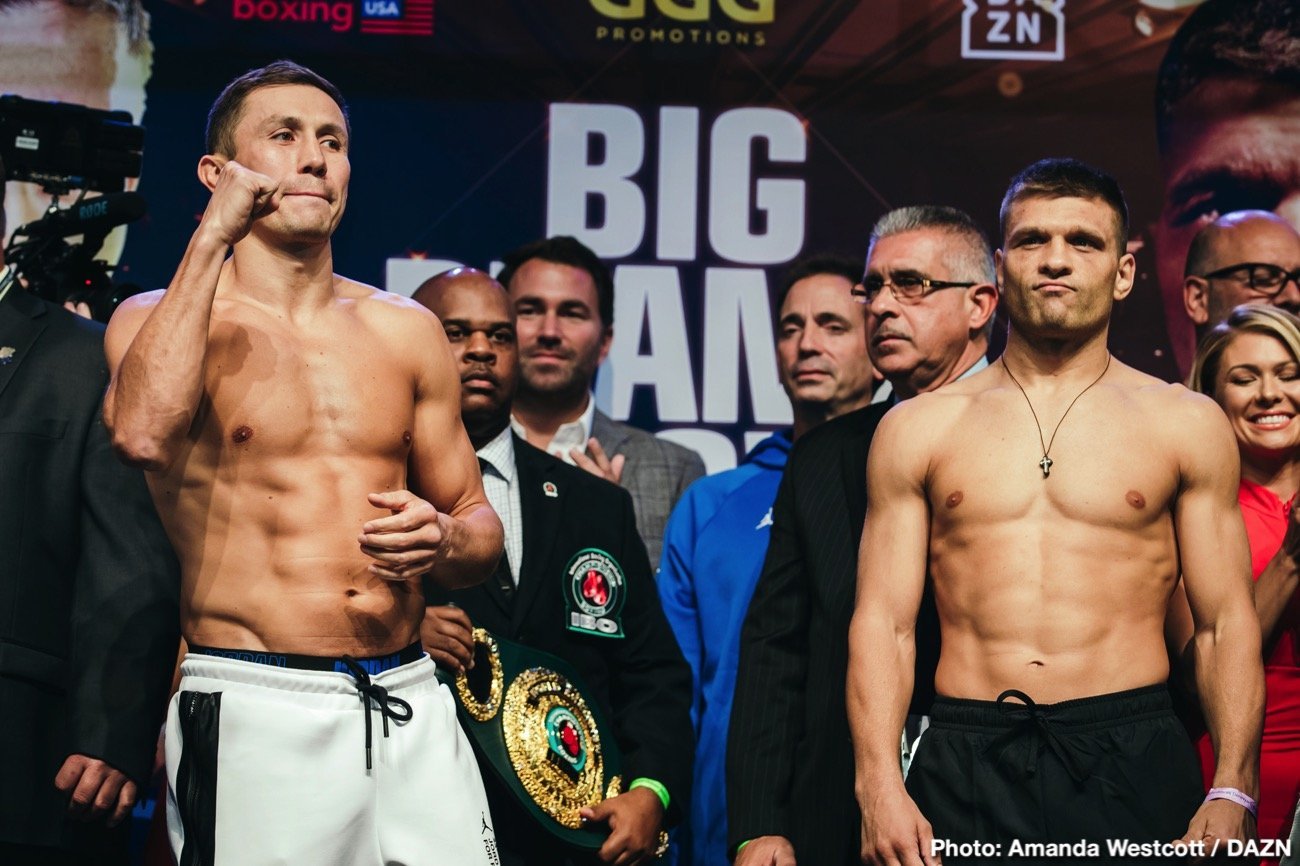 Eddie Hearn is worried about how Gennady Golovkin will perform tonight against Sergiy Derevyanchenko on DAZN. With a lot of boxing fans seeing weakness in Golovkin’s game from his recent fights, Hearn wonders whether Derevyanchenko will beat GGG and show that he’s not the fighter he once was.

Golovkin (39-1-1, 35 KOs) is bitter and distracted going into tonight’s fight, as he’s upset that Saul Canelo Alvarez chose not to fight him on September 14. Golovkin believed that when he signed with DAZN, it would lead to a trilogy fight with Canelo, but now it’s unknown whether they will fight again.

Canelo has a fight on November 2 against WBO light heavyweight champion Sergey Kovalev. Beyond that fight, Canelo hasn’t given any hints which direction he’ll be going with his career. If Kovalev destroys Canelo, Golovkin would be getting a badly tarnished fighter if he elects to fight him at that point.

Golovkin vs. Derevyanchenko will be fire-fight predicts Hearn

“I’m worried about the fight. It’s a great fight,” said Matchroom promoter Hearn to Fino Boxing about Golovkin being at risk against Derevyanchenko. “People talk Gennady Golovkin, ‘Oh, he’s getting old. He’s getting this.” These are the fights where you find that out, because Derevyanchenko is an excellent fighter, and a great amateur. This is his moment, and I think it’ll be a fire fight,” said Hearn.

Hearn recently signed an agreement with Golovkin, and he’s trying to rebuild his career. Golovkin lost to Canelo in their rematch in 2018. Coming off that defeat, GGG looked rusty in his recent fight against Steve Rolls last June. If Golovkin loses tonight against Derevyanchenko, it’s going to take some of Hearn’s magic to rebuild him. This could be like Humpty Dumpty.

Golovkin is the A-side in this fight. So if the match is close, he’s expected to get the nod on the judges’ scorecards. Derevyanchenko recently found himself on the receiving end of a controversial decision last October against Daniel Jacobs in New York. Jacobs was the A-side in that fight, and the judges gave it to him despite Derevyanchenko looking like he’d done enough to earn the victory. If Golovkin wants to be given credit for a win tonight, he’s going to need to make it conclusive. He can’t be seen as getting a gift from the judges.

“Gennady Golovkin sometimes gets hit a little too much, because he likes to stand and trade,” said Hearn. “If you do that with Gennady, you’re in trouble. But I think Derevyanchenko is up for that. I think he will oblige, and I think you will get 3 to 5 rounds of brutality, and we’re looking for a major statement from Gennady to say, ‘I’m still here. I’m the man the middleweight division,” said Hearn.

It’s possible that Golovkin could knockout Derevyanchenko. Jack Culcay hurt Derevyanchenko a couple of times in their fight last April, but he ended up losing by a 12 round decision. Culcay was throwing a lot of shots, and had the speed to connect. Golovkin doesn’t throw combinations, and his hand speed isn’t that great.

GGG needs to have a cool head tonight when he steps inside the ring with the 33-year-old Derevyanchenko. It won’t work on Golovkin’s favor if he’s holding onto his mental baggage about Canelo choosing not to fight him last September. It would be good for Golovkin to listen to Hearn, and do his own thing. Hearn wants to match him against Callum Smith, Billy Joe Saunders and Demetrius Andrade. If Golovkin beats all three of those guys, then it’ll create a lot of pressure on Canelo to face him again.