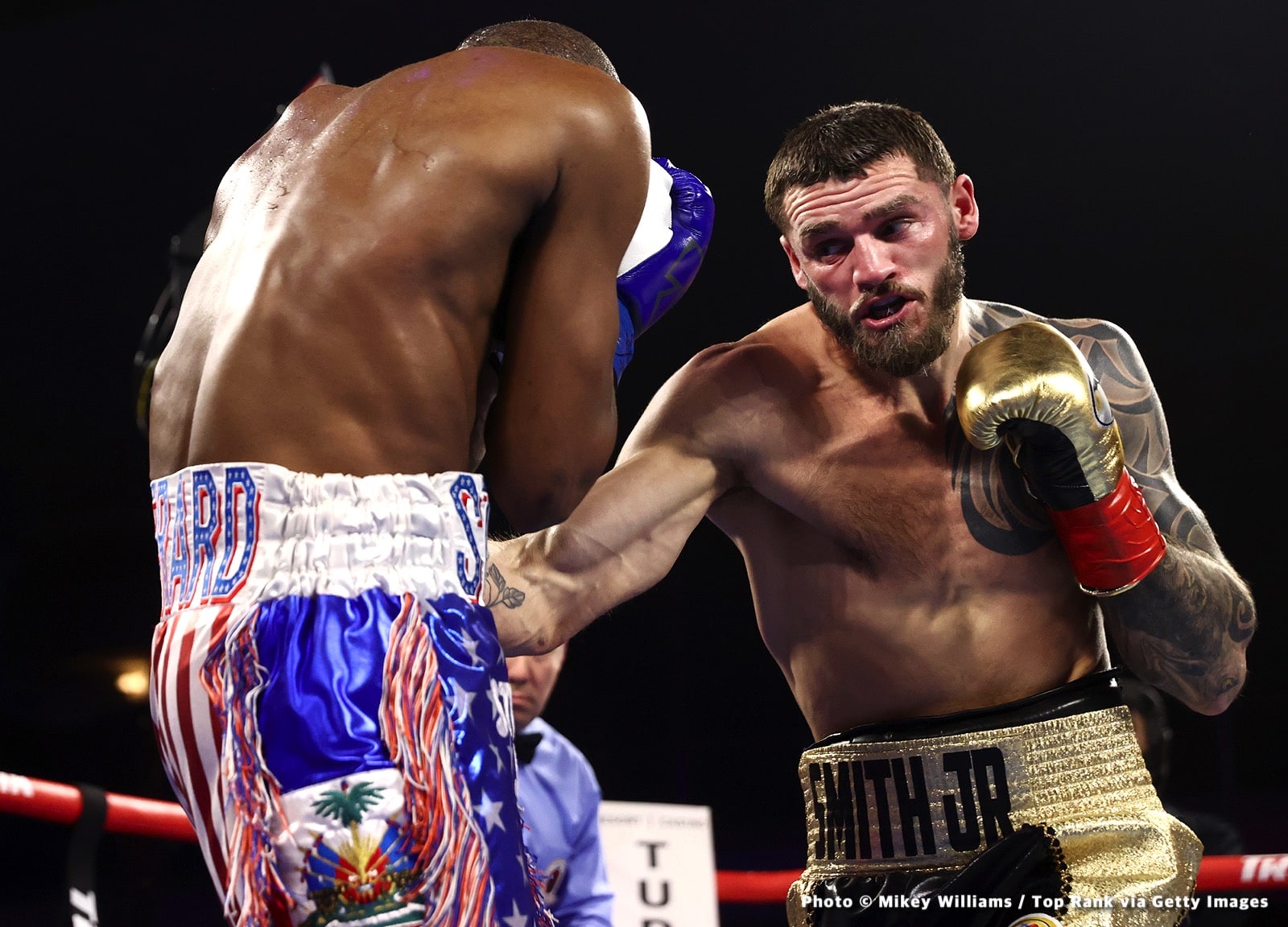 WBO light heavyweight champion Joe Smith Jr. (28-3, 22 KOs) battered his reluctant opponent Steve Geffrard (18-3, 12 KOs) for eight one-sided rounds before finishing him off in the ninth round on Saturday night in their headliner on ESPN from the Turning Stone Resort Casino in Verona, New York.

In the ninth round, Smith flurried on the stationary Geffrard, hitting him with ten consecutive rapid-fire headshots that put him down. While Geffrard was still on the canvas, his corner had the fight stopped. It didn’t matter, though. 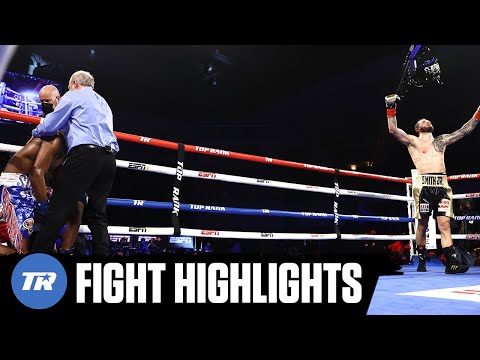 Geffrard wasn’t going to beat the count anyway. He looked like he’d just climbed out of a foxhole after a direct overheard B52 carpet bombing. Geffrard looked hurt and confused looking in looking at the referee and the crowd.

The finishing punches by Smith was a hard right hand followed by a left hook to the head when Geffrard began sinking to the canvas like a big ship going down.

You can argue that the final sick left hook from Smith wasn’t needed because Geffrard was already going down, but he still threw it for good measure.

For boxing fans hoping to see an entertaining fight, they were likely disappointed because Smith-Geffrard was a beat down from start to finish.

The 31-year-old non-top tier opponent Geffrard was brought in as a replacement and he fought like one, failing to show that he belonged inside the same ring with the hard-hitting 32-year-old Smith Jr.

ESPN’s commentators talked about how Geffrard had a good amateur background before turning professional, but it didn’t look like it tonight. His methods were unsound.

Commentator Tim Bradley seemed exasperated by Geffrard’s fight strategy, and he seemed to be imploring him to throw punches. He wouldn’t do it, though, because he was likely afraid of getting staffed by Smith’s bombing raids.

Geffrard wanted no part of coming out of his foxhole tonight to risk getting blown up by one of Smith’s powerful shots, but ultimately, he got torn apart anyway despite hiding behind his high guard the entire night.

“You can’t win a fight by not throwing punches,” said Bradley, which was quite true.

He was never going to win by covering up, waiting for Smith Jr. to punch himself out in the championship rounds, and that was clearly the game plan Geffrard brought to the fight.

It might have had a chance for success if Geffrard threw some punches back and moved around the ring a little, but he showed motivation to either of those things.

All in all, it was a good victory for Joe Smith Jr. tonight. If you’re IBF/WBC light heavyweight champion Artur Beterbiev or Canelo Alvarez, you’d be impressed with what you saw tonight.

Beterbiev will likely be interested in fighting Smith after tonight’s performance. In Canelo’s case, I have my doubts whether he’ll want any of the smoke with Smith. He’s too far advanced compared to the 168-lb champions Canelo feasted on in 2020 and 2021.