WBO light heavyweight champion Joe Smith Jr. is defending against substitute Steve Geffrard in a vital fight on ESPN on January 15th. Smith (27-3, 21 KOs) has an outside shot at getting a fight against Canelo Alvarez on May 7th. The card will be shown on ESPN beginning at 10:00 p.m. ET/7:00 p.m. PT.

First, Smith, 32, must defeat the second-tier replacement opponent Geffrard (18-2, 12 KOs), brought in after Callum Johnson tested positive for COVID 19 and was yanked from the card.

Smith and the Miami, Florida native Geffard will be headlining this Saturday night at the Turning Stone Resort & Casino, Verona, New York. This will be Smith’s first defense of his WBO 175lb belt he captured last April against Maxim Vlasov.

It should be an easier task for Smith to win his first defense on Saturday now that he no longer needs to worry about dealing with the enormous bombs being thrown at him from Britain’s Callum Johnson.

Smith has turned his career around with three straight victories after losing a one-sided 12 round unanimous decision to WBA light heavyweight champion Dmitry Bivol in March 2019.

Bivol completely outboxed Smith, making it look relatively straightforward other than one instance late in the fight in which the New Yorker staggered him with a shot after the bell in the ninth.

If Smith doesn’t get the fight with Canelo on May 7th, he’d like to face 175-lb champions Artur Beterbiev or Bivol next in a unification. Those fights would make Smith the most money and help him add to his legacy. 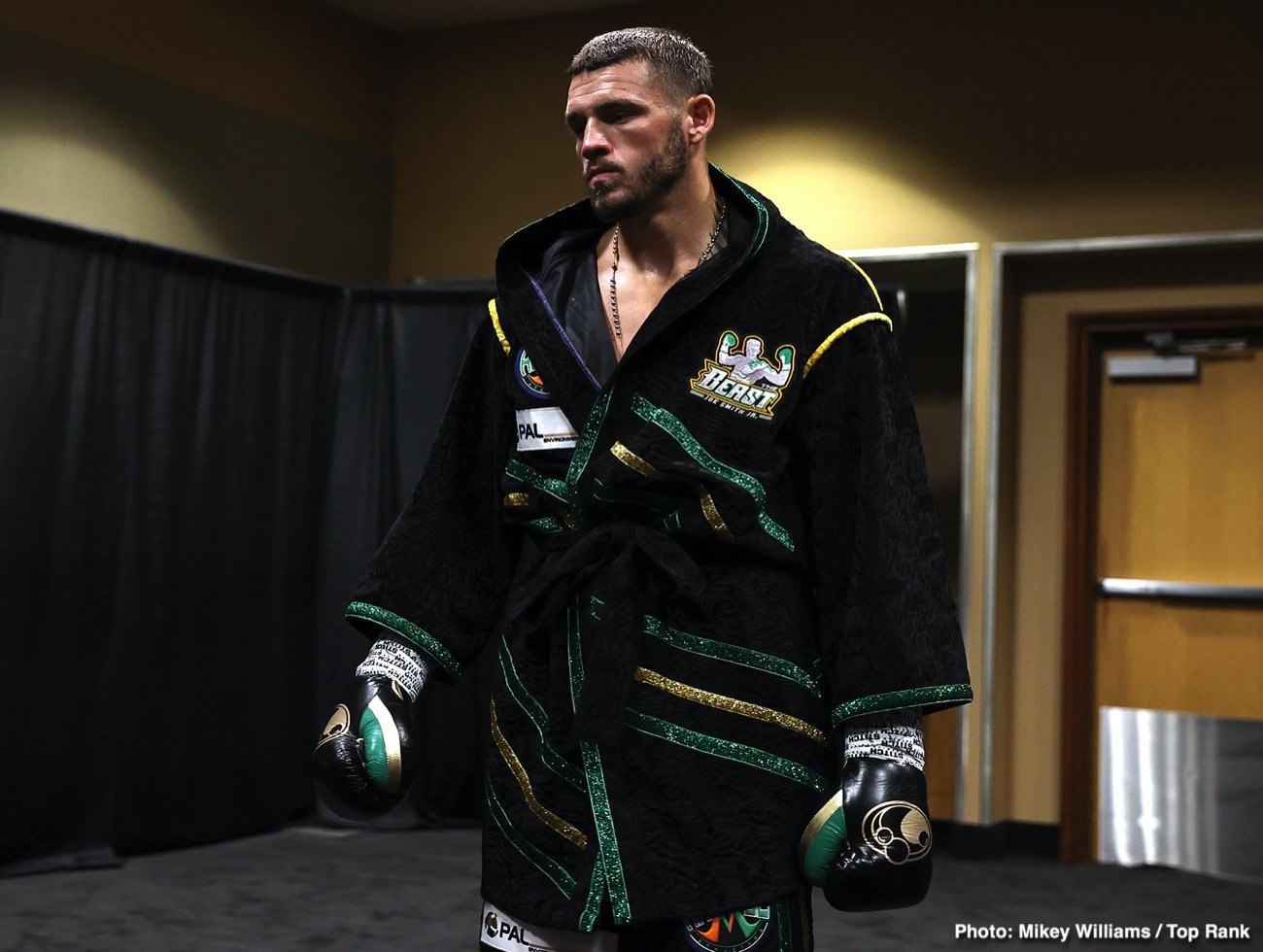 Bivol isn’t the same fighter that Smith lost to three years ago, and there’s a good chance that he beats the Russian. The same goes for IBF/WBC 175-lb champion Beterbiev (17-0, 17 KOs).

The 36-year-old Beterbiev has lost hand speed, and he’s not as sharp as he was in 2019. Although Beterbiev’s punching power is still present, he’s hittable now, and his wins are becoming harder for him. Smith would have a better than average chance of beating Beterbiev now.

“I would look forward to May or September, the two dates that Canelo likes to fight, that he would fight one of those light-heavyweights,” said Arum.

That will be a shock to many boxing fans if Canelo (57-1-2, 39 KOs) chooses to fight Joe Smith Jr. next because ESPN’s Mike Coppinger reports that talks have begun for a fight between Alvarez and Jermall Charlo for May 7th.

The negotiations between Canelo and Charlo will likely be complex, meaning there’s a chance that the fight won’t come off for May on the Cinco de Mayo holiday. In that case, Joe Smith Jr. could be the next best option for Canelo to take.

Alvarez’s original plan of moving up to cruiserweight to challenge WBC champion Ilunga Makabu appears to have been scrapped, likely due to him being stuck in a title defense on January 29th.

For a fight between Canelo and that little-known 34-year-old Makabu, they would need a considerable amount of time to promote it because few fans are familiar with the WBC champion.

Also, Canelo could be concerned about what it would do to his body to bulk up to cruiserweight and then drop a massive amount of muscle weight to return to the 168 or fight at 175.