On this day 30 years ago, Iran “The Blade” Barkley perhaps cut his most damaging blow. Though Barkley had cut down the great Thomas Hearns to win his first world title in the summer of 1988, the Bronx terror had then lost to Roberto Duran (in one of the greatest fights of all-time, granted) – and Barkley had then lost to Michael Nunn and Nigel Benn, and he had suffered a serious eye injury.

Many had Barkley down as a shot, faded, never to come again fighter. These people were dead wrong. 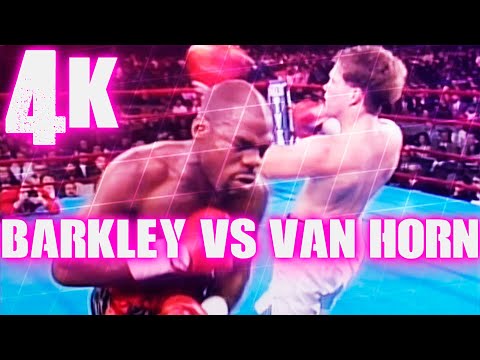 Hooking up with a new trainer, former light-heavyweight champ Eddie Mustafa Muhammad, 31-year-old Barkley was about to unleash a whole new reign of terror.

Darrin Van Horn was 48-2, he was a two-time world champ and he was vastly younger and fresher than Barkley, who was 28-7. On the night of January 10, 1992 in New York, none of this mattered. Barkley ripped Van Horn’s IBF super-middleweight title away from him like it never belonged to him in the first place.

Here, 61-year-old Barkley kindly recalls the fight, and what came after, for ESB readers:

Q: How much did you know about Van Horn going into that fight?

I.B: “At the time, I didn’t know much about Darrin Van Horn, he was sort of like new for me. But I looked at a tape of him, one time, and I just said to myself, ‘yeah, I’d definitely take care of it.’ I knew he was strong but the tape of him I watched, he couldn’t knock the guy out. I think it was [Gianfranco] Rossi, the Italian guy.”

Q: Can you remember who you sparred for the Van Horn fight?

I.B: “Yeah, I sparred with Vincent Boulware, and Tony, I think it was Thornton. I was ready for that fight.”

Q: You came out and you just went at him with your left hook, which was so sharp. People said at the time that this was Iran Barkley at his most vicious!

I.B: “(laughs) Yeah, but I’m always that way. I took a lot of things out in the ring. I had worked on the left hook for that fight but I’m naturally a left hander.”

Q: How great was Eddie Mustafa Muhammad as a trainer?

I.B: “Mustafa was a real good motivator for me. He knew how to push buttons to make me kick.”

Q: You had so many good and great performances during your career. Does the Van Horn win rank up there?

Q: And was the plan to get him out quick?

Q: 1992 was a great year for you. Van Horn and then Thomas Hearns again.

Q: What’s amazing now, looking back, is how you beat Van Horn, then called out Hearns for the rematch, and then just two months later you two greats had the rematch! That doesn’t happen today.

Q: But going into the Van Horn fight – was it always your plan to knock him out, or beat him, and then call out Tommy Hearns?

Q: But you had other options. Could you have stayed at super-middleweight after beating Van Horn, and got big fights there?

I.B: “Yeah, I could’ve stayed at super-middleweight. But I wanted to call him! See, I had to call Tommy – ‘cos Ray Leonard never wanted no part of me. He used to tease me, though, asking me, ‘ok, when do you wanna fight?’ But the second Hearns win, that was so satisfying for me, because I did something that Ray Leonard couldn’t do.”

Q: Going up to light-heavyweight, was it hard to get back down to 168, for the James Toney fight?

I.B: “It was hard, as I knew it would be. But I decided to take the chance. I wanted that rematch [with Hearns] so bad!”

Q: Getting back to Van Horn. Have you ever seen him or have you spoken with him since your fight?

I.B: “I never got a chance to see Van Horn again.”

Q: You had a great career; with so many names on your resume. The one fight many fans felt you might have had, was a rematch with Nigel Benn. He hit you with some cheap shots. Was there ever any discussion about a return?

I.B: “No. They never wanted to fight me, Nigel didn’t want it. Most definitely I would have fought him again, because he threw some dirty punches at me. The ref, he should have disqualified him but he (referee Carlos Padilla) didn’t know what he was doing and that cost me.”

Q: When you look back – who was the greatest fighter you ever faced? I think I know your answer…..

I.B: “The greatest? Roberto Duran. You know something, the reason why I think about that fight the most, it’s because of what Duran and my good friend Davey Moore had went through. That was so special for me, but me and Duran became friends.”

Q: Duran in ’83 against Moore; he did use his thumb and he raked Moore with his laces and all those dirty tricks. Did Duran try any of that stuff on you in the ’89 fight?

I.B: “No. He fought clean with me, because he knew I wasn’t gonna take it.”

Q: You spun Duran’s head around in that amazing 7th round! Two clean left hooks. What kept him up?

I.B: “That was a good spin-around! That was me and Davey Moore hitting him. I don’t know how he stood up. I think God showed me that Davey was with me that night and he let Duran survive.”

Q: It’s possibly the greatest fight of all time. Do you ever sit and watch yourself and Duran going at it?

I.B: “To this day I still watch it. But I get into it too much. It makes me think those days are still around.” 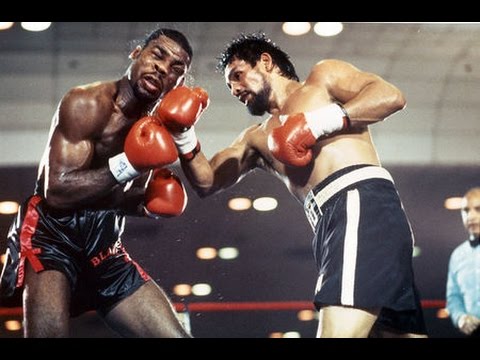