Joe Joyce is excited about the possibility of being chosen as the next challenge to face WBC heavyweight champion Tyson Fury for his defense in early 2022.

Suppose Dillian Whyte and his promoter Eddie Hearn fuss over Fury defending against the 2016 Olympic silver medalist Joyce. In that case, Top Rank can always request that the WBC elevate him to Franchise champion, and Whyte can have the WBC trinket while Fury faces Joyce in a blockbuster contest in the first quarter of 2022.

Fury’s promoter Bob Arum mentioned the unbeaten #3 WBC Joyce (13-0, 12 KOs) as a possible next opponent for him along with Dillian Whyte. Arum says the decision will be made by Fury (31-0-1, 22 KOs) on which of these two fighters he wants to face in his next defense.

Joyce would be the far easier fight to put together for Top Rank to face Fury than dealing with the arduous task of hammering out a deal with the Matchroom Boxing promoted Whyte (28-2, 19 KOs).

Fury would potentially make more money fighting Whyte, but the headaches and time required to negotiate the fight might not be worth it for him and Top Rank.

Fighting Joyce would be the easier option and would give the 6’9″ ‘Gypsy King’ better preparation for a match against the 6’6″ Joshua if he wins his rematch with Oleksandr Usyk next year.

Joyce is eager to fight Fury next

“It’s really great to be mentioned to potentially fighting Tyson Fury alongside Dillian Whyte,” said Joe Joyce to Behind The Gloves. “As you know, Dillian Whyte has had a long route to even get his title shot.

“He’s almost here, but I’m pushed up to that level now, so exciting times. Next year is going to be some really big fights for me.

“Yeah, they put it in the group chat. That’s how I find out information these days so it seems,” said Joyce about him being alerted by his team that Fury’s promoter Bob Arum is interested in matching him potentially against ‘The Juggernaut’ next.

“It’s massive [to fight Fury]. We just have to see how it goes because originally I was supposed to fight [Oleksandr] Usyk, but you know how boxing changes, so you never know. I’ve got a good team, and they’ll guide me right, and also Frank Warren.

“Yeah, it would be one hell of a fight [with Fury] because we’ve done plenty of rounds sparring, and it’s always been very competitive. So, yeah, it’s one of those hard fights.  It’s 50-50; he’s [Fury] on the top of his game. I look forward to it,” said Joyce.

Fury might lose his WBC title if he elects to fight Joyce instead of his interim WBC champion Whyte, but that’s no big deal. It would be effortless for Top Rank to ask the World Boxing Council to elevate him to Franchise champion.

“It went as I expected it to because I thought Wilder would have come with something different because he’d been training with Malik Scott,” said Joyce in commenting on Fury’s recent trilogy match with Deontay Wilder.

“He’d been working on body shots, and I think he’s [Wilder]  been improving. But you can only improve your skills so much when already Tyson Fury’s skills are up here. It went as I thought it would go.

Although I said [Fury would win] in round eight,  it was round ten, so I might have lost money if I had put money on that round.

“Yeah, it’s a potential fight, and he’s been around the block, and it would be a good scalp,” said Joyce about former two-time heavyweight world title challenger Luis ‘King Kong’ Ortiz being a potential next opponent for him.   “In the meanwhile, while I wait for my [title]  shot,” said Joyce.

It wasn’t surprising that Wilder lost Fury for the second time, given all the weight that the ‘Bronze Bomber’ packed onto his 6’7″ frame.

It looked to some boxing fans that Wilder’s inexperienced trainer Malik Scott forgot about working on his cardio, which resulted in Deontay gassing out after two rounds against Tyson. 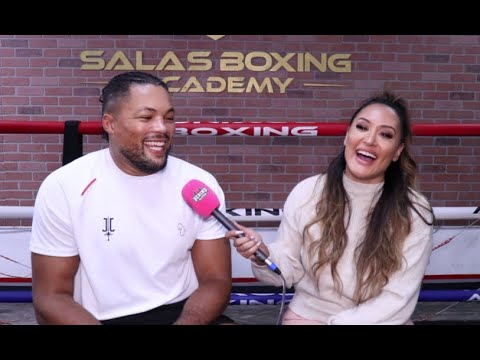