This Saturday night, we climb back on the saddle once again as boxing fans in what has been a dynamic string of weekends that will last thru at least June, according to the schedule. Last summer Jermell Charlo and Brian Castano fought to a disputed draw, and now both men will get a second shot at undisputed at the junior middleweight division.

Some in the boxing world believe Jermell will reverse his fortunes the way he did in the rematch with Tony Harrison. 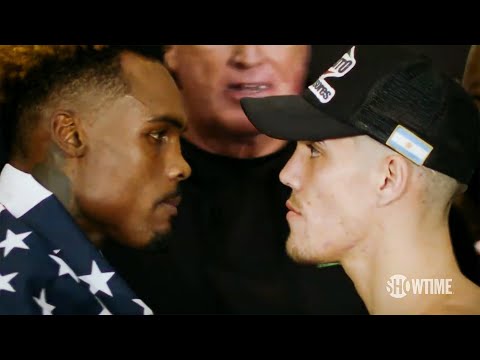 Others believe it will be more of the same in favor of Brian Castano power punching with flurries to get his hand raised. This event will be live at the ‘War Gardens” in southern California and broadcast on Showtime/SHOApp.

Legendary broadcaster Steve Farhood recently stepped in as the narrator for Showtime’s round-by-round review of the first fight, and I must say it’s worth a watch. Watching it back before my Rope A Dope Radio Podcast, it was a great reminder of the keys to the first fight and what each fighter will need to do the become victorious in this much-anticipated rematch. Personally, I thought Castano did enough to earn the win that night, but it was mostly winning the rounds by a quality power punch or two. I also think he probably can’t improve a bunch from their first meeting.

The first thing Castano did very well and will need to continue is the flurries in the last part of the round in an attempt to put a stamp on the memories of the judges. Another must he will have to carry over is his ability to not only cut off the ring on Jermell, but the moment Charlo was close to the ropes, Brian was in attack mode. The left hook was a weapon and may be used more in the rematch paired with Castano’s sneaky right hand to the head. His right hand found a home on Charlo’s chin all night long, and that’s why throwing it a tad more to the body along with more left hooks will help disguise it this time around. Surely Charlo will be at least more aware of that weapon, one would assume anyway.

Castano’s compact quick-handed efficient attacks kept Charlo guessing and hindered his counter shots, especially the left hook, which he hurt Castano with a few times. Also, Castano’s high guard was fairly solid and dampened some of the effectiveness of Charlo’s jabs and power shots. All and all, if Castano can make it to round 13, he should be able to get the job done come fight night.

As previously mentioned, many folks speak to the adjustments that can be made for Jermell, and they bring up his Harrison rematch stoppage. The problem with that theory is this boxing podcaster had Harrison up 6-4 prior to the knockout. Besides, my scorecards in their first match had Charlo winning that fight, but that’s not to say Mell can’t make the minor changes to ensure a ‘W”.

First things first, Jermell did a great job establishing the jab and was able to hurt or at least buzz Castano on multiple occasions with power shots. He just didn’t throw enough combinations or attack the body all that much; neither man did, to be fair. Charlo will have to not only stay off the ropes but push Castano back at times. Another adjustment will be to use his hook or check hook taking a step to the side or pivot out instead of consistently getting stuck with his back on the ropes. Based on Brian’s high guard, maybe employ an uppercut and turn some of those speedy crisp jabs into left hooks. By the way, it did seem like Charlo found his timing in the later rounds, so let’s see if that carries over.

The last thing to point out is Charlo staying away from exchanges unless it’s a catch and shoot, then move. Castano is not the guy you want to spend too much time going tick for tack. This should be another fun back and forth affair that will be close once again on the cards. Any result and that includes another draw wouldn’t shock me, and it’s really about Charlo’s mindset heading into this run-it-back scenario. I almost forgot to add that David Sutherland had Charlo up 96-93 in the Harrison rematch, and he will be one of the three judges for this fight.

My Official Prediction is Jermell Charlo by Split-Decision.

Side Note: ESPN+ picked up an interesting heavyweight bout between Tony Yoka and Martin Bakole.

Written by Chris Carlson, Host/Producer of The Rope A Dope Radio Podcast Available at www.blogtalkradio.com/ropeadoperadio. Follow on Twitter @RopeADopeRadio