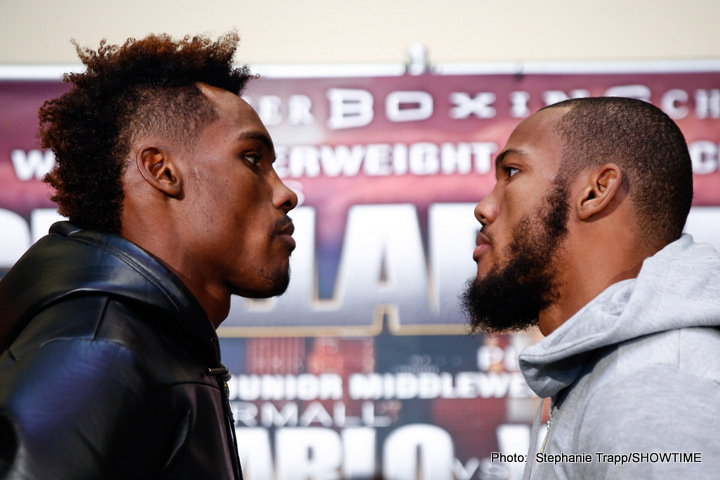 Prime and ready for battle, unbeaten junior middleweight’s Jermall Charlo and Julian Williams Jr. clash for one of the top spots at the division. Charlo is more experienced as a pro and Julian with a tad more potential. The process of splitting hairs is needed when attempting to separate who will be victorious this Saturday night.

Turning the page is what 2016 was supposed to be about for the many fighters waiting in line to become the next Floyd Mayweather and Manny Pacquiao. Or at least make a name as the new kids on the block at several weight classes that include featherweight, welterweight, and junior middleweight. Saturday’s co-feature bout will mark the 5th, 154-pound match made on Showtime of the year.

Out of all the fights that could be made, Charlo versus Williams is by far the most intriguing from a style standpoint and perhaps a glimpse into the best that 54 has to offer. The top flight names to mention at junior middleweight are Erislandy Lara, Vanes Martirosyan, Jermell Charlo, and Demetrius Andrade. Technically, Miguel Cotto and Canelo Alvarez still reside at 154 along with hot prospects Jarret Hurd and Erickson Lubin.

As previously mentioned, Jermall Charlo is the more experienced of the two having already faced and beaten Austin Trout back in May. But that’s where the tough opposition on his resume ends. No matter how you slice it, going 12 hard rounds with a crafty veteran like Trout will only help in a variety of ways. Charlo’s confidence will be higher winning a title and it showed he can adjust in the ring and solve the problems Austin presented. Trout got off to a fast start and made Jermall earn every round he won. After the midway point and especially down the stretch, Charlo had an answer for anything that Trout threw at him.

Julian Williams Jr., trained by Stephen Edwards, looks every bit the part of a hardworking and talented duo that has what it takes place ‘J Rock” as the top dog at 154lb. Julian has all the tools but got stuck sharpening them while waiting for his opportunity to shine. Finding suitable or even step-up opponents hasn’t been easy for the kid from Philadelphia, Pennsylvania.

A little over three years ago in Julian’s 15th fight he gave a glimpse of a bright future against an undefeated contender Hugo Centeno. The fight was stopped due to an accidental head butt but it was crystal clear to anyone that witnesses it that Hugo had nothing for Julian. Whether it was cutting of the ring applying pressure or scoring counter shots, Julian was a level above Centeno.

He may have gotten the Centeno fight based off an uneven performance in a draw to Francisco Santana, a six-rounder in his 7th outing as a pro.Since the Centeno no-contest, a fitting name for the result, it’s been difficult to find a dancing partner for Williams. Although his team has continually kept Julian active as a gym rat, nothing beats actual in the ring adversity or facing a durable skillful test.

It’s safe to say Jermall Charlo will bring more punching power but that could be the only advantage he’ll hold in this 50-50 matchup on paper. Speed is a toss-up much like the outcome of this fight so I would rather wait to see which man holds the advantage.

Charlo’s power and speed is impressive but the question will be does it transfer over against an all-round fighter like Julian Williams Jr.? I’m guessing it will based-off the performance and skills he displayed against Trout. Williams may not be a slick on the move boxer as Austin Trout, but the eye-test tells us that Julian is defensively sound, especially in the pocket. And it won’t be just scoring points as Trout was able to accomplish. ‘J Rock’ packs more of a punch and is a craftier on the inside.

This flip of a coin junior middleweight bout will likely still be on the table in the last 3 or 4 rounds. The fight will be a cross of chess-match meets barn burner. At times it will fought at a measured pace while other moments hard exchanges.

Although Charlo made the correct adjustment in his last outing, Trout was unable to use a plan B. Charlo may land the harder looking punch but Williams will score in 2-punch combinations and be harder to hit. Bringing the fight to Charlo in spots along with scoring points on the outside favors Julian Williams Jr.

My Official Prediction is Julian Williams by Majority Decision.

Side Note: Keep your eye out for the IBF heavyweight bout between Anthony Joshua and Eric Molina which will be aired live during the late afternoon and on tape-delay on Showtime.