Jermaine Franklin’s trainer Jesse Addison had Dillian Whyte in a fit of rage during Thursday’s final press conference after he said he’s a “wounded lion” that they’re planning on picking off this Saturday night in their headliner on DAZN.

Addison was merely pointing out the obvious, reminding the media that the 34-year-old Whyte has been knocked out in two out of his last four fights, and he’s coming into the fight in a vulnerable position.

The way that an angry Dillian Whyte repeatedly interrupted Addison suggests that he’s got some self-doubt lurking in the back of his mind about his ability to win this fight to keep his career going a little bit longer for a big payday against Anthony Joshua.

Whyte (29-3, 19 KOs) is in a must-win situation with this fight because he’s got a massive money match waiting for him against the former two-time heavyweight champion Joshua in the first quarter of next year.

For Dillian to get that mega-millions rematch with AJ, he must defeat Franklin (21-0, 14 KOs) this Saturday night at the OVO Arena in London, England. According to Eddie Hearn, if Whyte loses, it’ll be Franklin that faces Joshua.

“Well, he ended up pushing a promoter. He knew not to push the one with a black beret on [Franklin]. He went for the weakest prey because he’s weak. He’s a wounded lion, and he was trying to get some brownies, but come the 26th, we’re knocking him out,” said Jermaine Franklin’s trainer Jesse Addison to Fighthype about Dillian Whyte shoving the promoter during the final press conference on Thursday.

“I’m confident because I know what Jermaine Franklin has done. I know what kind of position he’s in. We’re ready to shut it off.”

“They can say I’m a wounded lion. I’m still a predator, and what do predators do? They kill,” said Whyte.

“Can he stand and mix it with ‘The Body Snatcher’? Can he stand in the trenches? Do you think he’s prepared to go?” said Eddie Hearn.

“He can do whatever he wants to do. I don’t care,” said Whyte about Franklin. “I fought all kinds of guys. I fought tall guys and short guys. I fought Olympians and guys that destroyed everybody, and I found a way to beat almost all of them.

“The ones I didn’t beat, I still had the moments in the fight. They say I underestimated him. I didn’t underestimate him, trust me,” said Whyte. 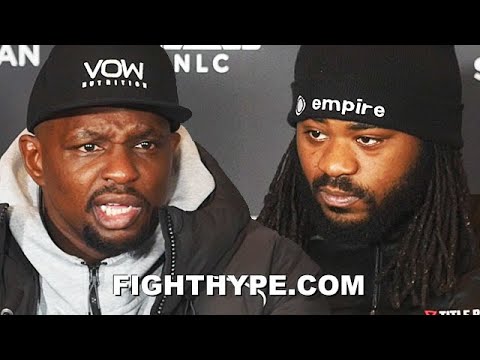