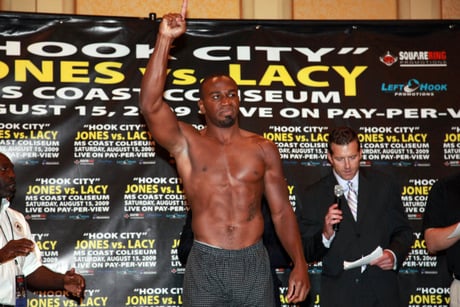 Former IBF super-middleweight king Jeff Lacy is still not ready to walk away from the sport he loves. “Left Hook,” now aged 39 and coming off a loss to Sullivan Barrera – a 4th round stoppage loss back in January of last year – will face former British light-heavyweight champ Tony Oakey in a white collar show set for Bristol, England on October 1st. Lacy, 27-6(18) will be making his first UK appearance since that famous night when Joe Calzaghe dethroned him and arrived as a star on the world stage.

That fight was over ten years ago, March of 2006, and many fans feel Lacy never fully recovered after the 12-round loss that saw him bravely take a ton of punishment. Lacy went on to face some big names after Calzaghe – including Jermain Taylor and Roy Jones Junior – but whether he boxed as a super-middleweight or as a light-heavyweight, Lacy lost almost as many as he won. Going 6-5 since the loss to Calzaghe, Lacy, though still looking to be in terrific physical shape, did not look like the terror that was smashing all that was in his path in 2004/2005 when he was a world champion.

Lacy will face 40-year-old Oakey, 29-6-1(8) in a bout dubbed “Resurrection – England Vs. USA” in a light-heavyweight bout that, being a white collar event, is not listed on BoxRec. Oakey has not boxed since 2010 and it is not clear what he has left to offer the sport at his current age. Still, the promoters of the October card anticipate a big crowd, while Lacy himself says he hopes Calzaghe will make an appearance so he can “go face to face with him” for a documentary that is being made on the warrior from Saint Petersburg, Florida.

Calzaghe may or may not show up, but one former Lacy foe who will definitely be there is Robin Reid, who Lacy halted to defend his IBF belt in the summer of 2005 – Reid will be the referee for Lacy against Oakey!

Lacy is excited to be headed back to the UK and to be having his first fight since last January, as he made clear when answering a few questions on social media yesterday:

Q: How much do you know about Tony Oakey?

Jeff Lacy: “Not too much, but I will physically find out all I need to know the night of the fight. I can‘t wait to be back in the ring again my friend!”

Q: Well, best of luck for the fight…

J.L: “No luck is needed at this level. Luck is for the fighters that don’t take the game seriously.”

On his hoped-for appearance by Calzaghe, Lacy said:

“I’m looking forward to having Joe Calzaghe attend this fight, to finish my documentary. It will be the only face to face chat we’ll have had since our fight over a decade ago. Joe finally made a name for himself after fighting me and he has stated that on many occasions. Now I’m hoping he will show up for this, my very first time returning to his country. I’m asking him to be part of my documentary, that’s all I ask for – a face to face meeting, with cameras; to talk about our fight. I made him a star and I have two ringside seats with his name on them.”

All in all, it could prove to be an interesting night in Bristol on October 1st.