Fortuna, 33, and Ryan will be fighting at the Crypto Arena in Los Angeles, California.

Former WBA super featherweight champion Fortuna (36-3-1, 25 KOs) says he believes Ryan (22-0, 18 KOs) is afraid of him, and he doesn’t accept his excuse for his decision to pull out of their fight a year ago when the two were scheduled to meet on July 9th on DAZN.

Fortuna doesn’t think Ryan had an anxiety problem because he saw him playing around with his girlfriend during the week of the fight. Since that pull-out, Ryan has fought once, beating Emmanuel Tagoe by a 12-round unanimous decision last April.

“Ryan is not as big as what everyone makes him out to be,” Fortuna said to the media. “You can expect a knockout from me. Speed goes away, and I have the experience to do that.”

Knocking Ryan out would ruin the mega-fight that he has been talking about between him and WBA ‘regular’ lightweight champion Gervonta ‘Tank’ Davis.

There will be massive interest in the Davis vs. Ryan Garcia fight, which is why it’s important that Fortuna knows what he’s getting himself into by fighting the popular social media star.

If Fortuna can negate Ryan’s hand speed and take away his left hook, he’ll have him where he wants him because he only uses one hand for virtually all his punching.

It’s unclear why the 23-year-old Ryan Garcia never developed his right hand, but it could be that he was self-taught, and by that time he could never learn once he hooked up with some good coaches.

Ryan has a good trainer now with Joe Goosen, but it’s unlikely he’s going to teach him how to use his right hand.

“You’ll see during fight night. You’ll see my power. I am looking forward to beating him at his house.”

“I fractured my little finger on my hand, but I didn’t want to lose the fight, so I went ahead and fought Jojo, and you all saw a great spectacle, even though I was injured,” Fortuna said about his battle against Joseph ‘Jojo’ Diaz last year in July.

“I feel really good about this fight, and I’m really happy this opportunity came back to me. If Ryan was here right now, he would pee himself because he’s afraid of him,” said Fortuna. 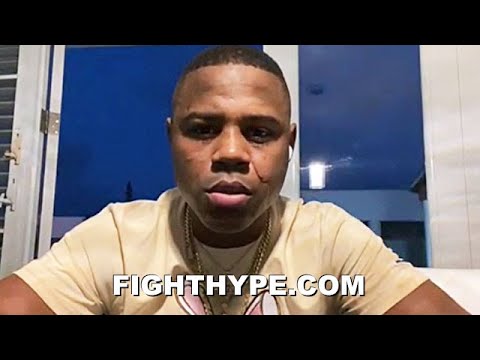