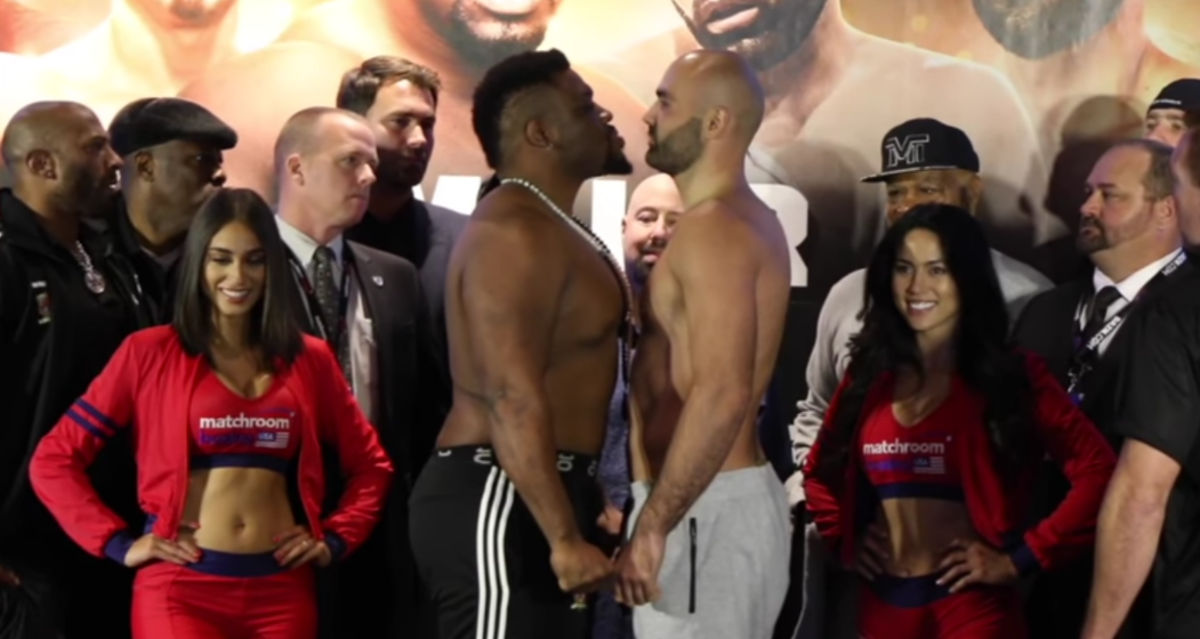 Jarrell Miller has weighed-in for tomorrow’s fight with unbeaten Romanian Bogdan Dinu. Once again coming in at a hefty poundage, “Big Baby” tipped-in at 315.4 pounds. Dinu, no small guy himself, came in at 237.4 pounds. Both men look to be in good shape, Dinu sporting a ripped midsection, Miller once again carrying his weight well.

Miller might be one of the best conditioned big – as in very big – heavyweights of recent memory. Despite scaling such an eyebrow-raising weight in previous fights, Miller has shown good stamina, a great punch output and he has shown he can go all 12-rounds in the need arises. Over the past couple of years or so, Miller has gone from 270, to 298, to 304, to a career-high 317 pounds. Yet in each fight, the Brooklyn fighter’s energy levels have remained high.

Dinu has clearly worked hard for this, the biggest fight of his entire career, amateur or pro. Who knows what kind of a fight we can expect in Kansas tomorrow. How good is Dinu? Will Miller roll right over the unknown fighter who has picked up a good deal of his boxing experience by serving as a sparring partner for the likes of Anthony Joshua and Alexander Povetkin?

Dinu, appearing confident this week and since when the fight was first announced, is talking a great game.

READ:  Abel Sanchez Wants To See Gassiev Get Shot At Revenge Against Usyk At Heavyweight
https://www.youtube.com/watch?v=grCb49eyseo

“I am looking to make a big shock. Of course I have the guns to KO him,” Dinu, 18-0(14) told this writer shortly after the fight with Miller was announced. “I will use speed and movement, and counters. I will keep him at the end of my jab and keep him turning. I am super-positive. I know I have what it takes to beat him. I have the guns for the job.”

It would be one of the year’s biggest upsets if Dinu managed to derail Miller – “Nobody’s gonna stop this express train,” Miller has stated a few times ahead of tomorrow’s fight – but as we know, anything can happen in a heavyweight fight. Especially when two big, big guys such as these two (one of them in particular) are in action.