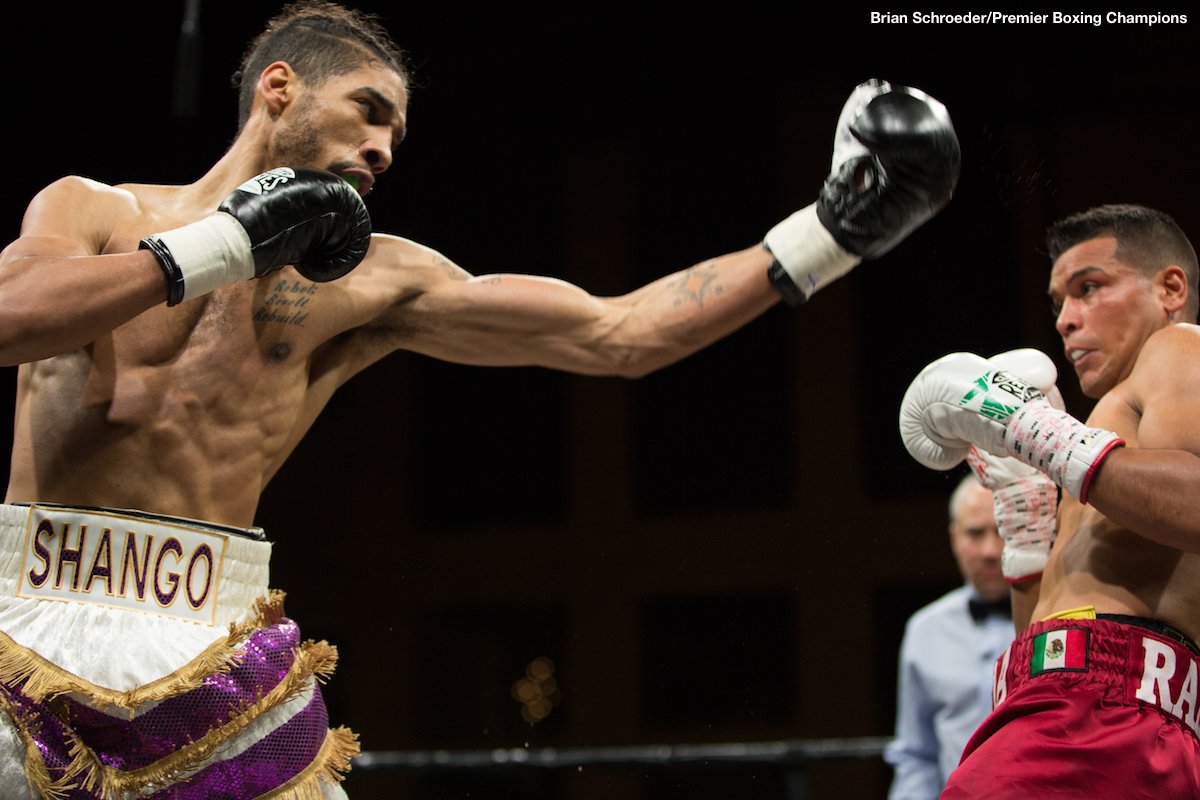 The hometown came out tonight to support their local boxers and left satisfied with the final outcome and the event as a whole. The PBC on FS1 card featured a little bit of everything, from a highlight-reel knockout to a few nail-biting results. Even with a rare mid-April snow storm that hit Minnesota on Friday night, Warriors Boxing & TGB Promotions still managed 3,521 in attendance.

In the main event, Minneapolis native Jamal James edged out a majority decision victory over tough-as-nails Abel Ramos. In the opening frame Jamal used pressure behind a sturdy jab and left hooks to the body. James came out fast in the 2nd only to be clipped by a shot that almost knocked him down.

Hard right hands to the body and lead or counter rights hands to the head, won James the next two rounds but the 5th was very close as Abel Ramos began to turn up the volume.  Abel mounted a sustained rally over the last 4 rounds eating punches from James, as he kept moving forward. Ramos went to the body and landed several left hooks to the head that seem to wear down James.

The co-feature between Edner Cherry and Dennis Galarza was a tale of two fights. Galarza started fast flashing the jab to set his power shots up nicely. In the early goings Galarza landed hard to the point it made Cherry a bit hesitant. By the midway portion of this bout the action began to heat up with both fighters trading hooks during exchanges throughout the 5th and 6th rounds.

Cherry was able to close the gap by landing flush rights and upper cuts on inside, repeatedly snapping Galarza’s neck back. Once the fight moved to the trenches it was all Edner Cherry as he found space to land his best shots, while using roughhouse tactics to nullify Galarza. The judges favored Cherry 97-93, 96-94, and 96-94.

The fight of the night may have come from a 6’6 Sebastian Fondora versus another Minneapolis product, Veshawn Owens. After a manic start from Owens, Fondora tamed Owens with upper cuts and short hooks. The 3rd round saw both men land lots of hard shots, Owens with his overhand rights, a few really found a home. Fondora shook it off and landed the cleaner punches the rest of the way.

Somehow Veshawn didn’t hit the canvas showing major heart. This was a good test for Sebastian Fondora who got bum-rushed early and did more than just weather the storm. It was very impressive how Fondora kept his cool and was able to throw short accurate punches on the inside considering his body type. The win pushed Sebastain’s record to 9-0.

Former #1 ranked & 9-time national amateur champion Joey Spencer (2-0, 2KO’s) made short work of Ousmane Sylla in his television debut. Joey’s first punch he threw resulted in a knockdown, Spencer’s left hook landed again causing another knockdown. Joey needed only two more punches, a right upper cut and yet another left hook to close the show in the first round.

Austin Dulay vs. Chris Colbert was the first TV bout and it didn’t quite live up to expectations. Colbert came out of the gate fast throwing lighting quick combos that troubled Dulay. Dulay finally made some progress in the fourth and fifth rounds by cutting of the ring.

Dulay’s rally would be short lived as Colbert poured it on with a looping left that caused a knockdown in the 6th and a jab, right hooks, and hard rights in the seventh. Dulay’s corner threw in the towel giving Chris Colbert the technical stoppage in this battle of unbeaten prospects.

Local prospects Marlin Sims and Uriel Lara moved to 2-0, both registering 4-round clear decision victories. Minneapolis fighter, Giezwa Peirre Hobbs used a steady jab to set up his right hooks and cruised to an easy victory over Raymond Chacon and is now 2-0.

Fighting out of Coon Rapids, Minnesota, Celso Ramirez got a great reception from the hometown crowd and didn’t disappoint scoring a quick knockdown and following it up with hooks to the body and head to finishing off Brandon Baue in the first round.

Haskell Rhodes and Mike Fowler engaged in a spirited fight that Rhodes won handily but had to work for everything he got because of Fowler’s solid chin.