Undefeated cruiserweight prospect Jake Paul (5-0, 4 KOs) bailed himself out with his one-punch power in knocking out former MMA star Tyron Woodley (0-2) in the sixth round on Saturday night at the Amalie Arena in Tampa, Florida.

Bleeding badly from a clash of heads that he suffered in the third, Paul, 24, landed a powerful right hand to the head of the 41-year-old past his prime Woodley, knocking him out cold and sending him face-first on the canvas. The fight was halted on the spot by the referee at 2:12 of the sixth. 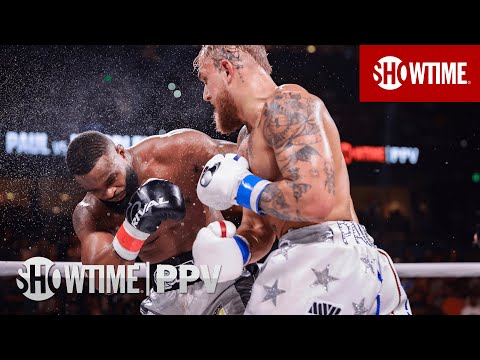 Woodley had made the fight a MMA type of wrestling affair with a ton of boring grappling being done, and very little punching. Obviously, that Woodley’s game plan from the get-go was to make it a wrestling affair because that’s where made his fame.

It wasn’t surprising that Woodley got caught because he walked right into the power alley of Jake, and was nailed with a big shot that knocked him down face first on the canvas.

Serrano holds three world titles at featherweight, but tonight’s fight was in the lightweight division.

38-year-old former NFL star running back Frank Gore lost to former NBA player Deron Williams by a four round split decision. The scores were 38-37, 40-35 for Williams, and 38-37 for Gore.

Despite these two being great fighters in different sports, it wasn’t scintillating stuff by any means. Gore and Williams looked exhausted and old. It wasn’t what you would have expected to see from great athletes like these guys. 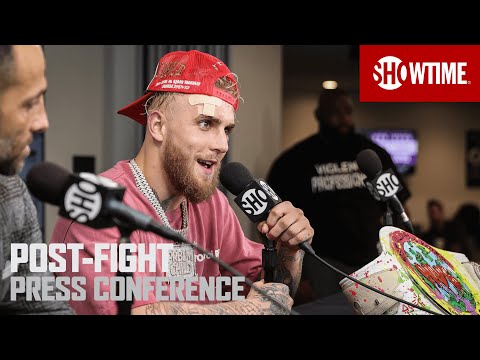 If Jake Paul wins, he says he wants to fight one of these guys in 2022:

As you can see, Jake intends on aiming high for his next opponent, and, YES, he’s looking past Woodley tonight.

It’s been four months since the 24-year-old Jake defeated the former MMA star Woodley by a eight round split decision in Cleveland, Ohio, and there’s still a lot of bitter feelings from Tyson, especially his fans.

Jake had been planning on fighting unbeaten light heavyweight boxer Tommy Fury, but he pulled out of the fight due to an injury, leaving Paul scrambling for a last-minute replacement.

Fortunately for Jake, the 41-year-old Woodley was available for a rematch. Woodley sealed the deal by getting the tattoo that he’d asked him to get as part of a condition for the rematch.

Had Woodley gotten the tattoo quickly, Jake wouldn’t have to bother trying to set up a fight with Tommy.

As for Tommy Fury, he’s burned his bridges with Jake, and won’t be given a chance to reschedule. Fury blew his chance to make big money in what would have been a career-high payday for him.

It’s going to be interesting if Paul is able to negotiate a fight with Conor McGregor, Nate Diaz, or Canelo Alvarez in 2022. Those are all HUGE fights that will attract a lot of attention, and make Paul a mountain of money.

Right now, it seems a bit farfetched that Jake would get a fight against Canelo Alvarez, but it’s very possible that he could.

Canelo and his trainer/manager Eddy Reynoso are doing unusual things now in going up to cruiserweight to try and win a belt.

All the time that Canelo spent in becoming the undisputed super middleweight champion suggests that he doesn’t care about fighting the best. He’s more focused on winning easily.

You can’t blame Jake for looking past Woodley because he’s not someone that is a great boxer and definitely deserved the defeat that he suffered last August against Paul.

If Jake has improved as he says he has, Woodley will be in a world of hurt tonight.

“My fight shorts will be the most expensive fight shorts that have ever been worn inside of a boxing ring, and you’ll have to tune in to see,” said Jake Paul to The Schmo about his $1.2 million shorts.

“I AM looking past Tyron,” said Jake when asked who he’s thinking of fighting next after Woodley. “I hate when fighters say this, ‘Oh, I’m not looking past my opponent. I have to get the job done.

“Why? I know I’m going to win. Why do you train? Why are you in the gym? Do you think you’re not going to win? If not, then you shouldn’t be a fighter.

“So, I’m looking past him and we’ll have a great 2022. We’ll see what’s in store, but yeah, there’s a reason Nate Diaz is here but everything has strategy behind it,” said Paul.

“We’re teaming up with Eddie Hearn. Yeah, the dynamic duo, Eddie Hearn and I will be making the biggest female boxing event in history. I’m super excited about it.

“Obviously, Amanda [Serrano] does have to get by Mariam Gutierrez this weekend, but I think she will,” said Jake. “She’s a superstar, that’s what she does. She hasn’t lost in over a decade, and she’s one of the greatest fighters ever.

“If she gets through that, it’s her against Katie Taylor in 2022 and that’s a movie.

“The vibe I get from both guys is they don’t really know what they’re getting themselves into, but I feel they’re getting a taste of it,” said Paul about former NBA star Deron Williams taking on former NFL all-pro running back Frank Gore.

“When you’re in the press conferences and you come face-to-face with your opponents, that’s when it’s very real. There’s nothing like it in the world.

“You can train for it, you can spar but as soon as the lights are on and you’re in the ring, all of that goes out the window. It’s going to be about who wants it more,” said Jake about the Gore vs. Williams fight.

Paul names his three-fighter wishlist for 2022

“I’m just fighting my demons on a daily basis, so Jake Paul vs. my demons in 2022,” said Paul on who he wants to fight next year. “But maybe, [Conor] McGregor is on that list, [Nate] Diaz is on the list, and Canelo is on the list. Those are all fights that you will see happen.

“It doesn’t,” said Jake about the Woodley finger tattoo. “It’s pretty weak, but he got it a month late. It’s like he was pretty desperate.

“I think what happened was I saw the wire from the fight hit his account, and his accountant was like, ‘You got to pay taxes on all of that.’

“He saw that and was like, ‘Wow, this is bad. I already bought a used Bentley. What am I going to do? If I get this tattoo, I can get the rematch,'” said Jake Paul in trying to understand why Woodley decided to get the tattoo that he’d asked him.