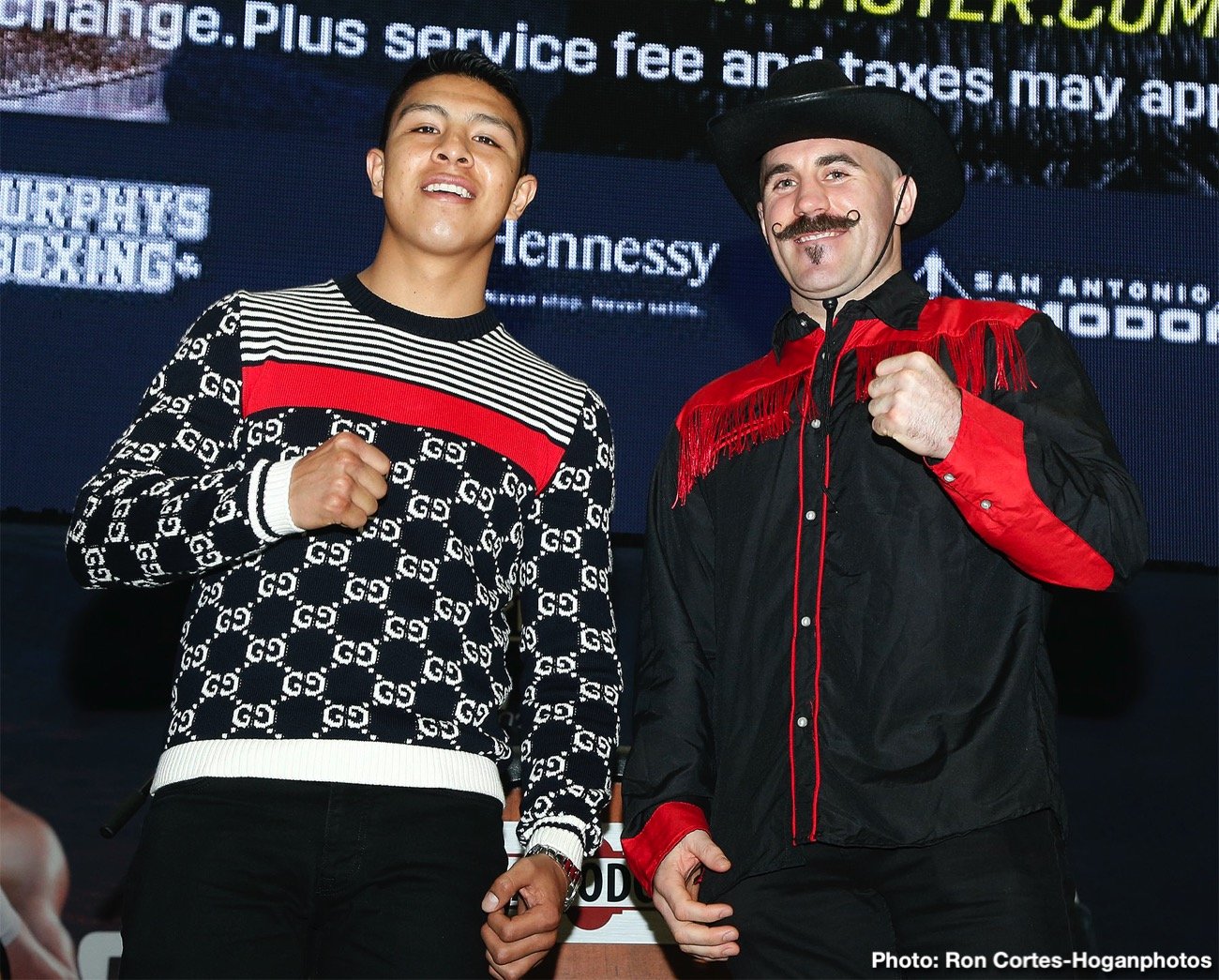 Jaime Munguia (34-0, 27 KOs) and Gary O’Sullivan (30-3, 21 KOs) hosted a press conference today The Alamodome in San Antonio, Texas to formally announce their 12-round middleweight fight, which will take place on Saturday, Jan. 11 at the very same place and will be streamed live on DAZN.

Below are what today’s participants had to say at the press conference:

JAIME MUNGUIA, Middleweight Contender:
“I want to say thank you to everyone for being here. To my promoters, Zanfer Promoters and Golden Boy, and the team of Gary O Sullivan. More than anything I’m very happy to be fighting in San Antonio Texas, I’m doing a great preparation in order to deliver a great fight. I’m excited to be moving up to 160 lbs. where they say that some of the most important fighters in boxing are. I have a very tough fighter in front of me, Gary O’Sullivan who’s very tough. If I want those bigger fights then I have to demonstrate that I’m worthy of that against this guy, so I have to do my best in order to rise up in the rankings. I look forward to delivering a great fight for Mexico. Viva Mexico.”

GARY ‘SPIKE’ O’SULLIVAN, Middleweight Contender:
“It’s an honor to be here at the Alamo. Thank you very much to everybody, all the staff here for making this event possible, Golden Boy Promotions, DAZN, Murphy’s Boxing, team Munguia, thank you all for making this wonderful occasion. I’m really excited about this and I’m looking forward to it a lot. Jaime Munguia is a great fighter, I’m very motivated by this challenge; he’s a young world champion, undefeated. For many, this is the stuff of dreams to come to his own backyard and fight the undefeated champion of the world. I’ve never felt the more motivated in my well career. I look forward to putting on a show for January 11. I’m going to prepare very hard for this fight, harder than ever, and come January 11 I’ll be ready for war.”

ERIK “EL TERRIBLE” MORALES, Hall of Famer and Trainer of Jaime Munguia:
“Good afternoon everyone. For me it’s a great honor to be training Jaime Munguia because he’s the new face of boxing, he’s a very young talented fighter. He gives everything in the ring, and he concentrates 100 percent at what he does. For me it’s also a big challenge because he is a novice who has to work a lot of things and we have to prepare for a very tough opponent. We have to make a lot of fixes and changes; the goal is to one day fight against big fights and big fighters and we have a lot of things to work on before that. I know that he will satisfy the Mexican fans and he’ll be the new face of Mexican boxing.”

PASCHAL ‘PACKY’ COLLINS, Trainer of Gary O’Sullivan:
“First I’d like to thank Golden Boy Promotions for the opportunity and Murphy boxing. Eric Gomez spoke to me a year ago and he said, you know, Spike came off a loss with David Lemieux in Vegas and a lot of people with judge Spike’s career on that last but they shouldn’t because anyone who knows boxing, anyone who was a fighter, you can get caught against a guy who’s 20 pounds heavier than you, and you will go down. I spoke to Eric not long after that and he said, Spike will be back in there again and two fights later, he kept his word. We’ve been watching Jaime Munguia closely for the last while because Spike did after the Lemieux fight decided to move back down to middleweight and the target we would be looking for would be Jaime Munguia. The fact that he was with Golden Boy, that fight would be easy to make, and then he fights Denis Hogan who is a friend of ours. Denis pushed him close and if the fight wasn’t in Mexico, if Jaime wasn’t the champ, maybe Denis would have gotten the decision that night. What it did do was it showed some flaws in in Jaime Munguia. I’m not going to sit here and trash talk because he’s a young fighter, for a guy his age to have so many fights at war level, it’s mind boggling. What Jaime shows me is that he’s strong, he’s very fit when he fights, he comes for it and loves a tear up. For a trainer, it makes it easier to come up with tactics to fight someone like Jaime. I want to thank everyone for this opportunity. I’m looking forward to Spike fighting in San Antonio. We’ve got a great connection. Irish people have a great connection with the Alamo. I think a quarter of the Texans who have fought were of Irish decent, so it’s like a homecoming for Spike too. Thank you DAZN, and thanks to the people. I’ll get Spike ready to put on a good show.”

ERIC GOMEZ, President of Golden Boy:
“We’re kicking off the 2020 year with a huge fight here at the Alamodome and it will be streamed live on DAZN. Jaime Munguia is developing into a huge star not only in the sport of boxing but in Mexico as a top athlete. We’re bringing him to Texas for the second time to the Alamodome and we’re very excited about that. It’s a new division for Jaime Munguia as he vacated his title and moved up his weight in middleweight, and he wants to challenge all the big champions like Canelo, Golovkin, so it’s going to be a very exciting time for him. It all starts with Spike O’Sullivan who is a very tough customer himself, and he wants to upset Munguia and prove that he belongs. This fight will be a classic Mexico vs. Ireland war.”

FERNANDO BELTRAN, President of Zanfer Promotions:
“Thank you. first of all. I would like to thank everybody for being here. It’s a great kickoff for a great press conference. We know we have a good challenge in front of us, we respect O’Sullivan a lot, we have seen him fight before, he went the distance with Billy Joe Saunders and knows how to fight. He’s a very a great fighter. It’s going to be an interesting fight between both guys. The difference between this fight and announcing this fight here in this sensational city and state, is that we’re binging two fighters who come to fight. Their faces will be different after they walk out of the ring. These guys are really going to come to each other, and we know we’re going to see a sensational bout of boxing. That really motivates me. We know this is a very big step because if Jaime wants to be in the top middleweight, he needs to pass this test. We’re very pleased with Erik Morales in his corner, we’re very pleased with our strategic partnership with Golden Boy. We thank DAZN and everyone who makes this possible.”

Munguia vs. O’Sullivan is a 12-round middleweight fight presented by
Golden Boy in association with Zanfer Promotions and Murphy’s Boxing. The event is sponsored by Hennessy “Never Stop. Never Settle.” The event will take place Saturday, Jan. 11 at The Alamodome in San Antonio and be streamed live exclusively on DAZN.

Tickets for Munguia vs. O’Sullivan are on sale and are priced at $200, $100, $65, $40 $25 plus applicable taxes, fees and services charges. Tickets can be purchased online at ticketsmaster.com and by phone at 1-800-745-3000. Tickets will also be available at the Alamodome box office, which is open Monday – Friday from 10:00 am to 5:00 pm C.T. and Saturdays and Sundays when events are taking place at the Alamodome. 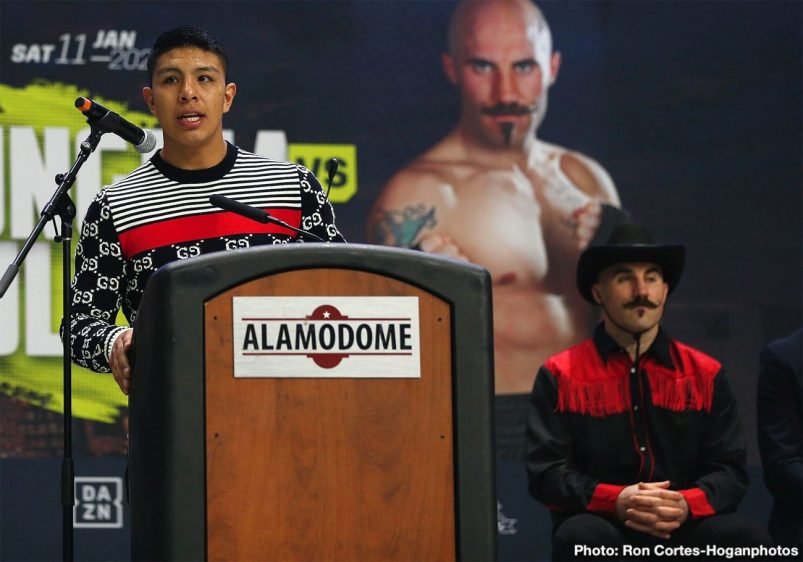 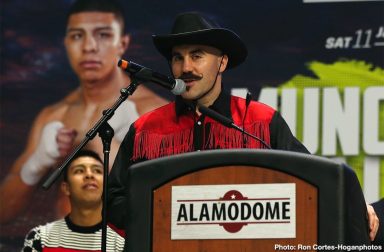 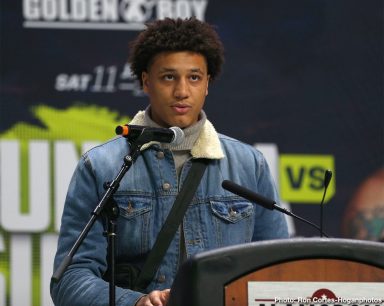 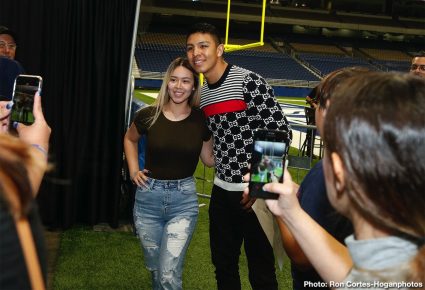 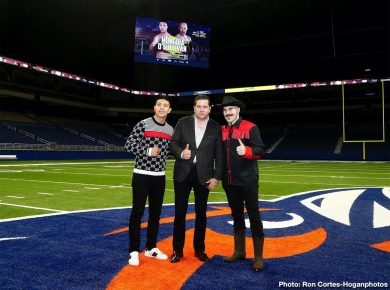 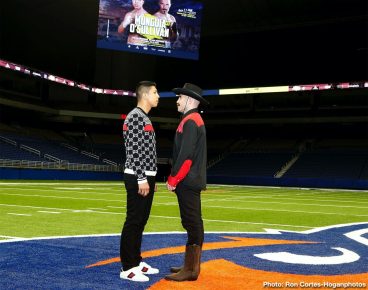 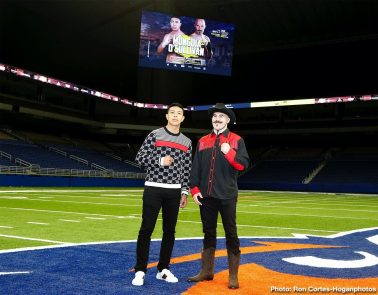 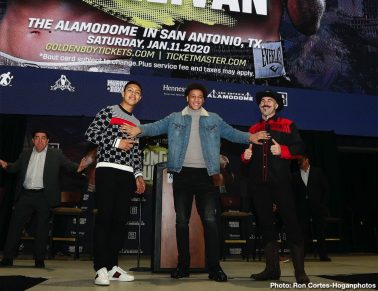 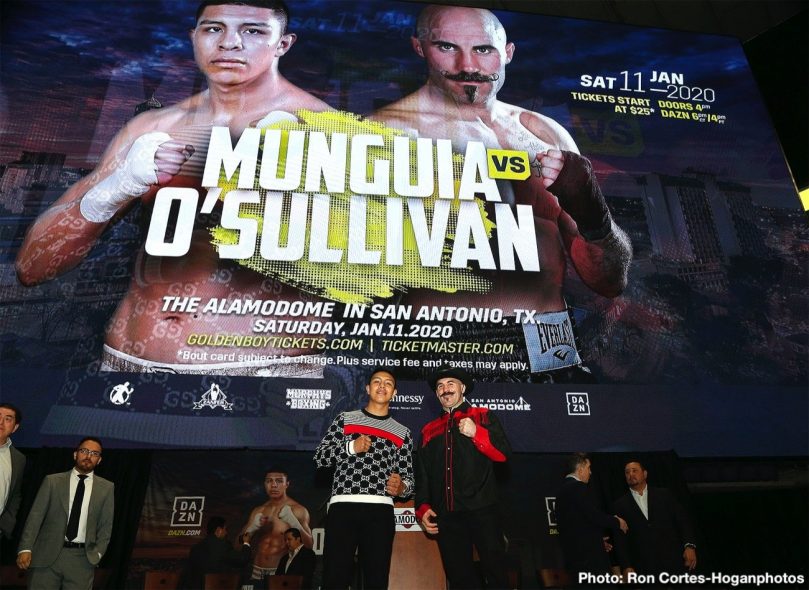 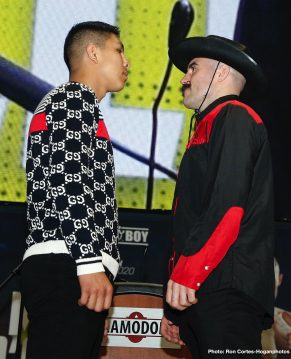 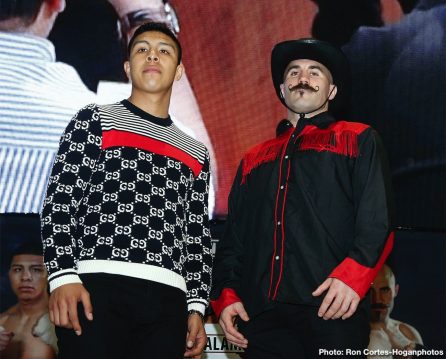 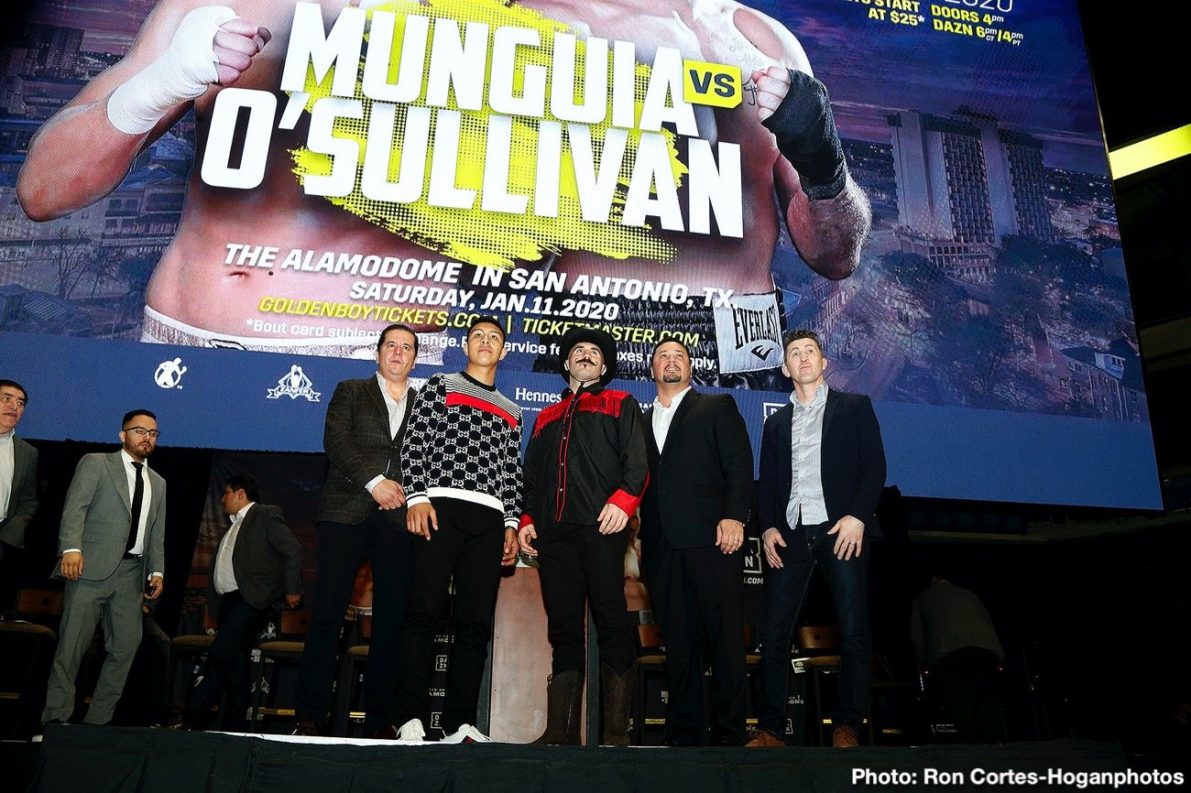