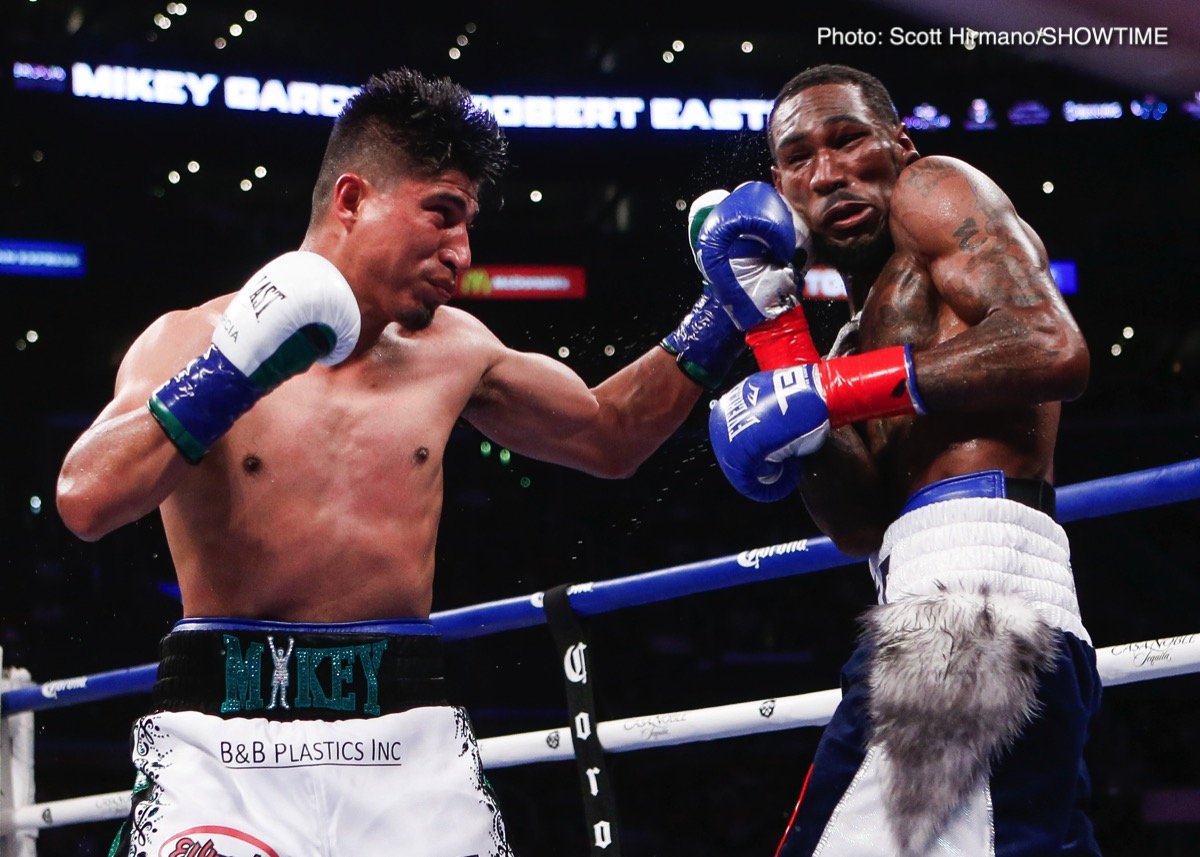 Mikey Garcia (39-1, 30 KOs) could be facing former 2 division world champion Jessie Vargas (29-2-2, 11 KOs) in a welterweight contest on DAZN in the first quarter of 2020. According to Mike Coppinger,

Matchroom Boxing promoter Eddie Hearn is interested in putting that
fight together. Hearn wants to sign the former four division world champion Garcia to a multi-fight deal. The first bout of the deal would be for Garcia to take on Vargas at 147.

The positives for Mikey signing with Hearn and DAZN are the following:

The downside of Mikey signing with Hearn, he’ll likely lose to Jessie Vargas BADLY, and then be faced with tough career choices. Either stay at 147 and continue to lose or move down to 140 or 135. Mikey won’t have it any easier at light welterweight against guys like Regis Prograis and Josh Taylor. Those are guys with bigger frames than Mikey, and both could easily fight at welterweight.

Mikey can’t compete against welterweights, and he would lose to Taylor and Prograis. Even in Mikey’s fight against Sergey Lipinets last year, he got beat up in winning a fight that appeared to be very close. The scores showed that Mikey easily won, but he didn’t. He was getting pounded by Lipinets. If a limited guy like Lipinets could do that to Mikey, just imagine what Prograis and Taylor would do to him. You get the picture.

If Mikey moves back down to 135, it’s debatable whether he could beat the young lions Devin Haney and Gervonta Davis. Those are young guys with a ton of skills. Mikey isn’t young, and he’s hurt his career by being inactive for such long spells. It’s safe to say that Mikey would lose to Davis and Haney. He’d have a puncher’s chance, but he’d still likely lose to both.

Mikey is arguably semi-retired at this point. He’s just waiting for big money fights, but not staying active and with little chance of winning the fights that are given him. Mikey is NOT going to beat the likes of Pacquiao, Danny Garcia or any of the top welterweights. That’s obvious. The sad part is, Mikey would have just as many problems at 140. The only weight classes Mikey has any chances of doing well at are 130 and 135, and even in those weight classes, he’s probably too ring rusty and old to excel like he used to.

It’s a deal that could blow up in Hearn’s face if Mikey loses to Vargas. If Mikey takes this fight against Vargas, there’s a good chance he’ll lose in the same way he did against IBF welterweight champion Errol Spence Jr. last March. Mikey didn’t have the size to get to Spence without getting picked apart on the way in. The fight wasn’t remotely competitive. Vargas is beatable, as we’ve seen in his losses to Pacquiao and Tim Bradley, but his size would be a real problem for a small guy like Garcia.

Vargas is a big guy at 5’11”, and he’s essentially a junior middleweight. He’s too big for welterweight, but on the small side for the 154 lb division.

Sources: A welterweight fight between Mikey Garcia and Jessie Vargas that would be streamed by DAZN has been discussed for the first quarter of 2019. Eddie Hearn has been pursuing Mikey for awhile now, and if he can sign him to a multi-fight deal, Vargas could be the first bout

Garcia has made it known that he wishes to fight WBA Super World welterweight champion Manny ‘Pacman’ Pacquiao next, and he’s one of the two names that is under consideration for his next title defense in the first quarter of next year.

Danny Garcia is the other name that is in the running for the Pacquiao fight. If Mikey doesn’t get the fight, then he would need to keep his career moving.