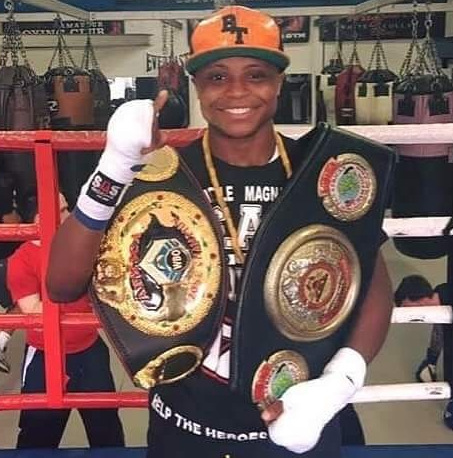 Young Ghanaian boxer, Isaac ‘Royal Storm’ Dogboe has declared a readiness to battle Oscar Valdez for the WBO featherweight world championship currently held by the Mexican and will put his case across when he travels with his father/trainer, Paul Dogboe to this year’s WBO Convention in Puerto Rico.

Undefeated Dogboe (15-0, 9 KOs) is attending the October 17 to 21 event as the WBO Africa as well the WBO Asia Pacific featherweight champ and also occupying his highest ranking at number 9 in the world ratings to the title held by the also undefeated Valdez (20-0, 15 KOs).

But the highly rated Ghanaian youngster who is currently training at the Miguel’s Gym in London is eyeing bigger prospects and is willing to challenge Mexico’s Valdez who steps into the ring on November 5 against Japanese Hiroshige Osawa in a first defence of the title he defeated Matias Rueda to win back in July.

“With the WBO convention so close, we will attend and challenge the highest available contender to secure the best possible ranking for Isaac and put us in position to challenge world champion, Oscar Valdez. We are ready for a final eliminator or the world title itself,” Paul Dogboe said.

“Our time has aligned perfectly to put African boxing on the map and introduce Isaac Dogboe to the entire WBO Executive Committee and all the major boxing promoters from around the world as the next WBO featherweight world champion,” Dogboe Snr added.

The boxer is currently in the United Kingdom on a short holiday but that has not stopped Dogboe from training and the man nicknamed ‘Royal Storm’ took time off his rigorous gym time to offer some few words to his countrymen for their steadfast support.

“I want to thank all the Ghanaian public for supporting me, you guys are lovely people, continue your great works and inspiring people. The Royal Storm is coming home soon with the world title,” Isaac Dogboe added in a short video dedicated to his Ghanaian fans.