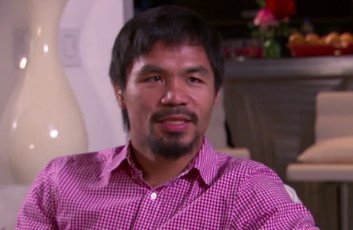 WBO welterweight champion Manny Pacquiao (56-5-2, 38 Kos) and his little known opponent Chris Algieri (20-0, 8 KOs) will start their 6-city press tour this Monday at The Venetian in Macau, China. The tour is designed to try and attract interest in Pacquiao’s HBO pay-per-view fight against the 30-year-old Algieri on November 22nd in Macao.

Pacquiao’s promoter Bob Arum is hoping that the press tour, combined with the many interviews Algieri and Pacquiao will be giving in the coming months, will be enough to make the Pacquiao-Algieri fight a success on PPV.

In other words, they’re hoping that fans will want to purchase the Pacquiao fight in high numbers despite the fact that he’s fighting an unknown that few casual boxing fans have ever heard of, and who doesn’t look or talk like a fighter.

In watching some of Algieri’s interviews, I’ve got to say that he doesn’t appear to be very charismatic. I don’t know that he’s going to be able to sell himself to the boxing public just based on his interviews, press conferences and HBO’s Pacquiao-Algieri 24/7 series they’ll be putting together.

This fight has the hallmarks of a fight card that will bring in dreadfully low pay-per-view numbers. Fans obviously don’t care about stuff like that, but what they do care about is getting a good product for their money. With the way that Algieri fights with his constant moving and jabbing – the Pacquiao-Algieri fight promises to be a very dull one similar to the first Pacquiao vs. Tim Bradley fight in 2012.

I’m not sure that Arum really thought this whole thing through clearly when he opted to have an obscure defensive fighter like Algieri fighting Pacquiao instead of a better known fighter with a more offensive style of fighting.

Since so few boxing fans have ever seen Algieri fight, Arum is going to need to sell the Paquiao-Algieri fight just based on how Algieri comes across to the media.

Algieri will have to sell the fight on his personality rather than on past fights that the casual fans remember from him. Algieri has beaten only one reasonably good fighter during his career in Ruslan Provodnikov, and even that win was a controversial fight due to the constant running that Algieri did.