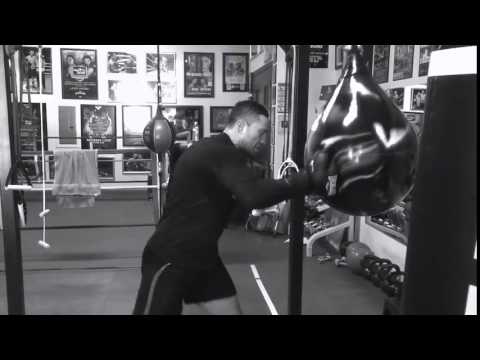 Having done all the hard work Parker now stands at the precipice of a legitimate opportunity to propel his career to next level status. That opportunity arrives in the form of Carlos Takam who has agreed to face Parker in what will be an IBF title eliminator with the winner scheduled to fight the winner of the Anthony Joshua/Charles Martin IBF title bout taking place in April.

The announcement of the fight comes at an opportune time for Parker having returned back to Las Vegas refreshed from a three week break over the New Zealand summer and with mind and body primed and ready to go after a productive 2015.

‘I really enjoyed the break I’ve had with my family and just being back home. I needed it to be honest. And now I’ve entered this camp very focused and importantly, very happy.’

Although Takam had been on Parker’s radar for a while it wasn’t until the IBF offered both camps the opportunity to fight for their mandatory position that talks began in earnest.

‘It was a fight that came together very quickly, as soon as the IBF came in with their offer we were ready to move. Now it’s time to put in the work.’

While fighter’s will routinely claim that they only take their careers one fight at a time and respect each opponent equally I put it to Joseph that it is the contests against dangerous opponents such as Carlos Takam that really get the competitive juices flowing and must make training camp that little bit more intense.

‘It’s a whole new level, it’s a make or break fight. It’s brought a lot more focus and excitement to my training already. I know a lot of the boxing fans are excited about seeing me get tested. He (Takam) is ranked across the board and is regarded very highly. He takes any fight that comes his way and from all the tape I’ve seen of him he always comes prepared and he’s a busy fighter.’

I ask Joseph to assess what he considers Takam’s abilities as fighter.

‘He’s very good defensively, he rolls with the shoulder, and he’s accurate with his shots. I saw in the Povetkin fight he caught him with quite a few uppercuts. He possesses a lot of dangerous weapons as a fighter. It wouldn’t be smart of me to brawl with a brawler. It will work much better for me if I fight like the bigger man. I’m going to have to fight the smartest fight of my career.’

While Takam is a big guy Joseph doesn’t plan on coming in any heavier than usual for this fight, although growth is something that he stills sees on his horizon.

‘I know I’ve got a lot more growing to do. Lennox Lewis is a good example of this. Over time as he progressed he put on more muscle but didn’t really lose any speed. I think something similar will happen for me.’

I suggest a clinical Lennox-type performance against Takam wouldn’t hurt either.

‘Yes, unfortunately the best example I can give is how Lennox beat David Tua. Just the way he controlled the distance in that fight, using his advantages, using his piston-like jab, I have to do the same.’

The spectre of David Tua inevitably rises whenever discussing the prospects of Joseph Parker. Tua was and remains the biggest name that the sport has ever produced in New Zealand, but it now seems possible that Joseph Parker is only a handful of wins away from attaining something in the sport that forever eluded Tua. Consequently interest in Parker’s career, just like that of Tua before him has piqued the interest of a nation. I ask Joseph how important is it for the sport and how much he would enjoy it personally, if he had the opportunity to fight Takam in New Zealand

‘I love fighting back home and we’d love to bring a major fight back to New Zealand. There is a lot of support but with it comes pressure, but I like that, I don’t mind that at all. But even if we have to travel to say France for instance that is part of the job. If we fight for the title one day it will most probably be overseas. There is huge interest in the UK right now in the division.’

With great risk comes great reward and a comprehensive win over a fighter as well regarded as Carlos Takam would herald Parker’s arrival amongst the very top tier of heavyweights. It’s something he readily agrees with.

‘It will make a big statement no doubt. It’ll show everyone that we’re here for real. We’re pretty confident in our team and if we put in the work we should do well. Kevin (Barry) has already put a great plan in place for this camp and for the fight. Should we implement it well we will have really arrived in the division. I believe if I have a great training camp I can beat anyone in the world.’

And up among the higher echelons of the sport is where Parker clearly wants to be. The drive, the work ethic and his singular focus are self evident in the way that he trains and prepares for each and every fight. During the glamour of fight night, with the bright lights and roaring crowds it’s almost easy to forget just what fighters and particularly young men put themselves through just to arrive on the big stage. The sacrifices, of which there are many, are willingly traded for those potential 36 minutes in a ring and the glory that comes with it.

‘It’s been a long journey no doubt, many years of amateur fights, travelling the world, giving up the chance to go out with friends, spending time away from home, but it’s all worth it. ‘

And all this sacrifice has meant a lot to Joseph’s family as well, especially for Joseph’s father Dempsey. It was Dempsey who first introduced his son to boxing, spending countless hours holding the mitts as Joseph practiced his combinations, encouraging the talent he saw in his son and instilling in him the possibilities that would open up to him should he become successful in the sport.

‘Before every fight he’s the one that’s the most nervous. Back in the day he used to tell me that if I did well in boxing it could change my whole life.’

There is more to the story though than just paternal advice. Due to a series of circumstances Dempsey had grown up without meeting his own father, a situation which Joseph rectified himself during his last trip to Samoa.

‘I was able to go and meet my grandfather for the first time. Although he hadn’t met me before, due to my success in boxing he knew who I was which made it easier. After my fight in Samoa we were able to arrange a family reunion where my dad got to meet his own father for the first time. I’ve never seen him so emotional, for my dad his life is complete. It’s great to have the whole family together, they speak regularly now and some of my cousins we have also since met in New Zealand.’

The story also took a retrospectively surreal twist when Joseph learned that his grandfather hails from just outside Düsseldorf, Germany, a city Joseph had passed through in 2014 when he faced Brazilian, Marcelo Nascimento on the Wladimir Klitschko/Alex Leapai undercard.

‘My grandfather’s family lives only 10 minutes from the airport, yet there I was only 10 minutes away and I didn’t even know! I can’t wait to track them down when I am next in Europe. It’s definitely a strange story and just shows you what can happen. I firmly believe the success I’ve had so far in boxing has played a part in helping to bring our family together.’

In a sport where much of the coverage is too often of a depressingly sad nature, full of hard luck stories and cautionary tales, it makes a refreshing change to hear about the positive impact that boxing has created for a young fighter and those closest to him; that prize fighting in some strange way has played a part in the reconnection of a family and healed the pain of prolonged absence.

And its thoughts of happiness and unity that Joseph Parker routinely calls on as he’s doing the lonely yards in the gym and on the road, the dream that should he get past Carlos Takam, his family, whether they be in New Zealand or Samoa or Germany will watch on with pride as he challenges for the heavyweight championship of the world.

Yes, even in boxing you can sometimes get the dream ending…………….