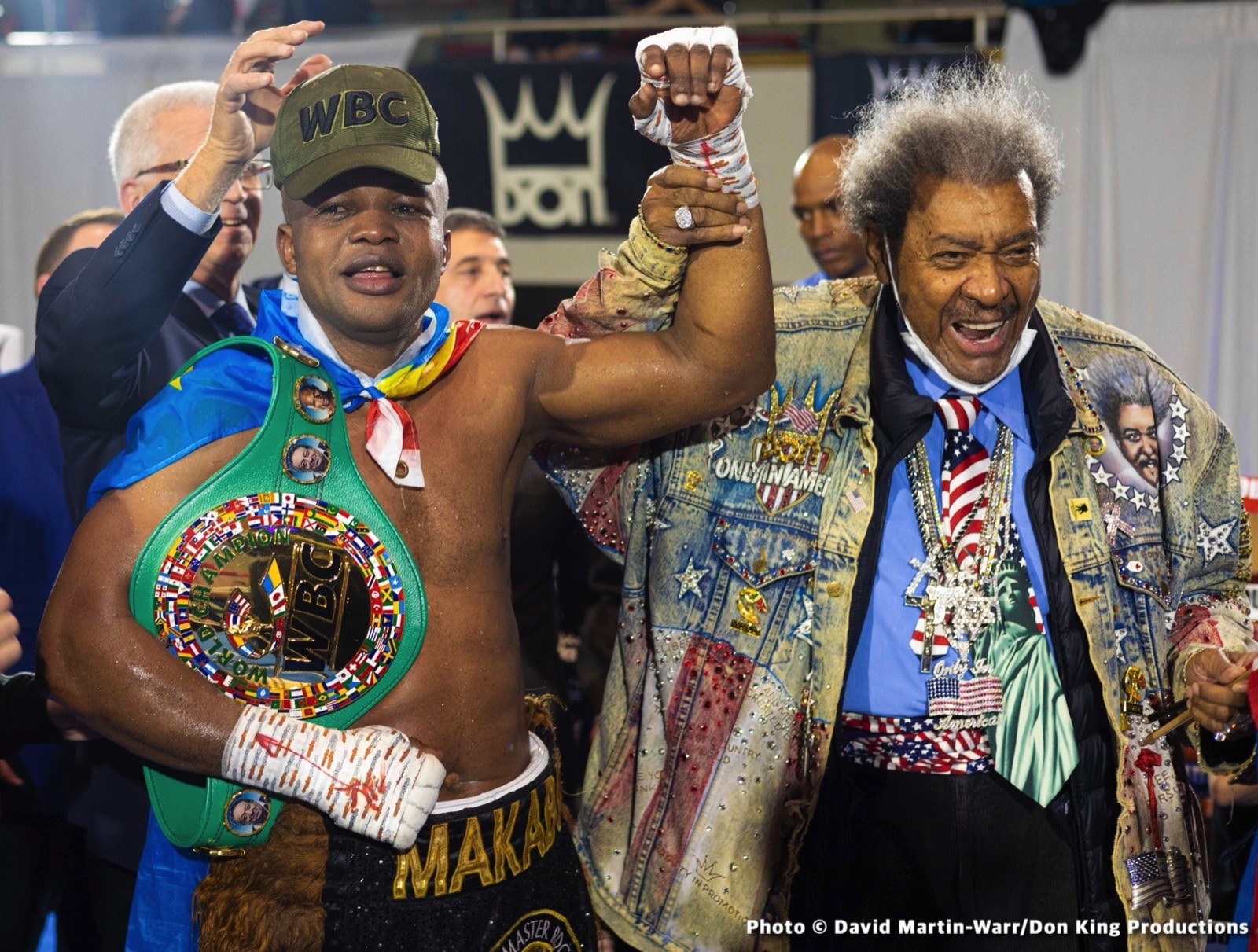 Ilunga Junior Makabu went through the wringer to hold onto his WBC world cruiserweight crown in a hotly contested victory in his rematch against bitter rival Thabiso ‘The Rock’ Mchunu. The pair had faced off previously in 2015, with Mchunu leading on the scorecards before being dropped for the count by a vicious left-handed uppercut.

Bad blood existed between the pair and that would have likely only been heightened when mandatory challenger Mchunu refused step aside money that would have allowed Makabu to pursue a mega money fight with Saul ‘Canelo’ Alvarez, the biggest draw in boxing.

Hard hitting Congolese champion Makabu entered this bout on the back of nine straight victories after being stopped by Tony Bellew during his first career world title shot. Makubu earned his second attempt at a vacant world title in January of 2020 and fought his way to a unanimous decision victory over then undefeated Michal Cieslak to capture gold.

The first defense of his world title came with a 7th round stoppage of Nigerian veteran Olanrewaju Durodola last time out which set up another all-African world title bout against fellow southpaw Mchunu.

No stranger to high level competition, Mchunu achieved his first notable win in 2013 when he defeated former world title contender Eddie Chambers, also beating Durodola on points before suffering what was only his second career defeat to Makabu in their first matchup.

The Rock rebounded and went on to earn a shot at the WBO world cruiserweight title, being stopped in the 9th round by current unified heavyweight champion Oleksandr Usyk. In 2019, Mchunu earned another quality win over former world champion Dennis Lebedev via unanimous decision in Russia.

Mchunu followed up the Lebedev win with another trip to Russia to hand Evgeny Tishchenko his first career defeat by unanimous decision. The win saw Mchunu rise to number 4 in The Ring Cruiserweight rankings and earn this mandatory shot against Makabu, who sat at number 2 on the list.

Challenger Mchunu opened the fight with a big left hand that was ducked under by Makabu before the pair spent the opening minute feeling each other out cautiously. Defending champion Makabu fought in classic southpaw style while Mchunu dropped his lead hand low and looked to catch his opponent with heavy left hands on the counter.

Makabu was fighting on the front foot in the opening round, stepping forward behind the jab while Mchunu circled the ring and picked his shots well on the counter in a tight opening round.

Mchunu closed the distance in round two only for Makabu to open up offensively and rough the challenger up with a range of punches before receiving a warning from referee Harvey Dock for use of the elbow.

The champion returned to his plan of fighting behind the jab and backed Mchunu onto the ropes before scoring with two powerful body blows and a strong hook. Mchunu tried to keep the champion honest with swift counter punches while Makabu kept digging away with body shots.

Makabu opened round three in strong fashion, firing out stiff jabs while ducking counter punches from The Rock. When Mchunu stepped forward to close space, Makabu responded with powerful close-range hooks to back off the South African.

With Mchunu pinned against the ropes late in the round, Makabu released a flurry of heavy blows, the most powerful of which was evaded by swift head movement from the challenger.

Makabu walked down Mchunu in the opening minute of round four, but The Rock landed quick handed counter punches, causing the champion to stumble back after losing his balance. The efforts of Makabu to crowd the space of his opponent were thwarted by slick counter punching by Mchunu, who split the guard of the defending champion with an uppercut and continued to pick his shots well off the back foot.

The lumbering Makabu continued to step forward in round five, but the sharp counter shots of Mchunu continued to find the target and prevented the champion from gaining any true momentum. Makabu reached out with a jab only for Mchunu to send sweat flying with a rapid right-handed counter that landed flush on the jaw.

Both fighters stuck to their gameplan in round six, with Makabu advancing behind the jab and a patient Mchunu picking his shots on the counter. In the final minute of the round both fighters traded blows toe to toe, with Makabu landing some heavy body shots and Mchunu slicing through with a searing uppercut.

Makabu was the aggressor in round seven, walking Mchunu into corners and firing out jabs and straight right hands. The challenger responded with a minute remaining in the round, landing a left and right hook to the head before following up his good work with a scoring uppercut. The round ended with Makabu on the front foot once again, walking down his opponent and accumulating scoring blows.

Round eight opened with Makabu walking Mchunu against the turnbuckle and letting his punches go, feinting with his hands before connecting with a left hand to the ribs. Mchunu sprang forward with a strong counter hook to interrupt the momentum, but the scoring jabs from Makabu were beginning to pile up and likely giving the champion a slight lead on the scorecards at this point in the fight.

Challenger Mchunu started round nine in a more aggressive fashion, crowding Makabu and digging his lead shoulder into the sternum of the champion before letting his punches go. Makabu responded with a flurry of punches but found Mchunu less willing to concede ground during this period, with The Rock holding position in the center of the ring and finding the target with some strong lead right hands.

The twitchy, feinting hands of Makabu probed for an opening in round 10 before the champion reached out with a jab and had his head rocked by two sharp counter punches from Mchunu. The challenger followed up his powerful blows by walking the champion back onto the ropes and pushing the head of Makabu back before referee Dock stepped in to separate the pair.

Makabu threw a lead right-handed punch but yet again the rapid hands of Mchunu connected on the counter, this time with a left hook to the jaw. The Rock later scored with a lead left hook to the body to likely bank a 10-9 round and leave the result well and truly in the balance as the fight headed into the final two rounds.

With his title reign well and truly under fire, defending champion Makabu walked Mchunu onto the ropes only to be rocked back by a whipping right hook. Mchunu found himself with his back to the ropes once more but countered well and used good footwork to escape pressure. Makabu remained active with the jab but continued to absorb hooks and uppercuts on the counter from an energetic challenger.

The bell rang to commence the final round with neither fighter certain as to who was ahead in a fight that was likely being scored very tightly by the judges (105-104 lead for Mchunu on this author’s scorecard). The Rock threw a one-two combination to the head before going low and digging hooks into the body of Makabu, in response the champion continued to move forward in straight lines behind a percussive jab.

Standing side on with his lead hand low, Mchunu absorbed a body shot before connecting with a lead hook and uppercut. As the final minute of the fight approached, Makabu connected with another body shot before Mchunu missed with a windmilling hook and the champion spread his arms wide to taunt the challenger. Both fighters were cautious in the final seconds, circling each other and looking to pick their shot just as had been the case in the opening minute of a very close and entertaining fight.

When the final bell rang, Makabu reached out to hug his opponent, but it was clear that the pre-fight bad blood remained as Mchunu pushed his foe away and returned to his corner wearing a stone-faced expression.

After a second ignored attempt to show respect to the challenger, Makabu returned to his corner and raised his arms before showing appreciation to the crowd ahead of the scores being announced.

Legendary promoter Don King climbed into the ring after the fight carrying his signature miniature USA flag along with the flags of South Africa and DR Congo, the home nations of the two combatants.

The scoring was mostly as tight as expected, with judge Nathan Palmer scoring the bout 115-113 in favor of Mchunu, while judge Steve Westfield scored it 115-113 in favor of Makabu. Judge Jamie Garayua cast the decisive vote in a split decision, awarding the victory to the defending champion Makabu by a surprisingly wide margin of 116-112.

Wrapped in the flag of his native land, a relieved Makabu smiled and raised his arms as victory was confirmed. On the other side of the ring, Mchunu cut a dejected figure and left the ring without being interviewed after coming up short once more against his bitter rival.

When interviewed in the ring by former world champion Ray Mancini after the fight, victorious champion Makabu thanked God, his team, Don King and DR Congo President Felix Tshisekedi. Makabu showed respect to Mchunu who he rightly praised as a great boxer and counter puncher and also expressed his pride in the boxing skills he had himself displayed throughout the fight.

“In my next fight against Saul, Canelo, I’m going to box and knock you out baby,” an exuberant Makabu left no doubt as to who he wants to face next. Mexican superstar Alvarez had previously planned to step up in weight to face Makabu before the fight was delayed.

Pound for pound king Canelo would be a massive challenge for Makabu given the troubles that Muchunu and his slick counter punching provided the cruiserweight king.

If the big money Canelo fight does not manifest itself, unification clashes against Ring and IBF champion Mairis Briedis or WBO kingpin Lawrence Okolie would be appealing events.

Mchunu holds onto his place as the number 4 cruiserweight in The Ring ranking and rightly so after a high-quality performance in defeat here. Mchunu would provide a stiff challenge for champions Okolie and Briedis if he can attain another world title shot. Another potential option for The Rock is what would be a top level all-South African battle against Kevin Lerena if the ‘KO Kid’ comes through his March bout against Bogdan Dinu.