Too early for an April Fool’s joke? Bernard Hopkins is sure to raise a few eyebrows with his latest comments regarding a possible Gennady Golovkin Vs. Oscar De La Hoya fight (just who would be the A-side if this fight did take place!). Speaking with Fight Hub TV, the ever-wise “Executioner” said that De La Hoya can come back and defeat GGG by unanimous decision.

Part of the reason B-Hop feels this way is the “decline” he says he sees in GGG “every year.” Hopkins says De La Hoya, who has “seen every style and been in there with better talent,” would indeed beat Golovkin via wide decision. So, is Hopkins crazy, or is he merely sticking by his Golden Boy buddy? Or, just maybe, the cerebral “Alien” sees something plenty of us cannot see. 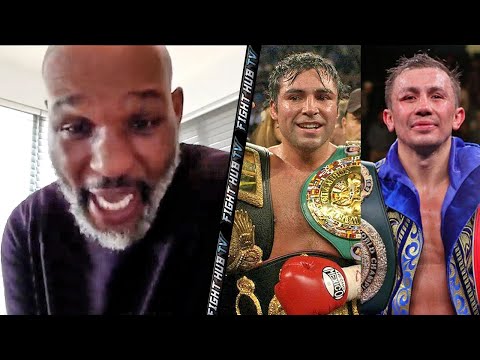 To most people, Triple-G, even at age 39 (in April) would be far too strong, powerful and dangerous for a 48-year-old (in February) De La Hoya. Heck, in a recent interview, GGG, usually a nice guy, said words to the effect that he would take the opportunity to “legally kill an opponent” if he got in the ring with De La Hoya. Nasty stuff.

But Hopkins says Golovkin, 41-1-1(36) has pretty much nothing left other than his big punch, and he insists De La Hoya can come back and beat him this year.

“GGG declines every year,” Hopkins said. “What he has left is always his punch. If Oscar was going to come back and I had a say in it, I would take GGG. GGG always had and always will have a punch but that is declining. Even in the win recently (over Kamil Szeremta, a KO in seven), don’t let that fight fool you. It doesn’t fool these eyes. GGG is a Hall of Famer no doubt. He earned his position but Oscar has seen every style and been in with better talent. Oscar would win by unanimous decision. I would let Oscar know that let’s start calling this guy out for September. I would like to see that fight before 2021 is out.”

Would YOU like to see it? If GGG is declining, how much has Oscar got left? Not even Hopkins can possibly know that. As fans know, De La Hoya, 39-6(30) has not fought since way back in December of 2016 when he was brutally beaten by Manny Pacquiao. I don’t know about you, but I see a similar beat down taking place if De La Hoya fights Golovkin. But what do I know – Bernard Hopkins knows a thing or two about how an old man defeats a much younger fighter. Hopkins made a career out of doing that back in the years 2008 through 2014.

Can De La Hoya come back and do it for one night only? It sure would be a sensation if De La Hoya managed to become only the second man to have beaten Golovkin.