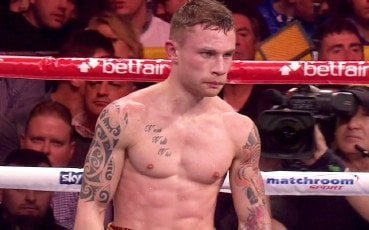 Of course it’s going to happen. It’s the only big fight out there for Frampton in the UK, and he and Hearn would be mad not to take it before Frampton or Quigg get exposed by better fighters in the division. We saw that Frampton is good enough to Martinez, but we also saw that he’s not much better than that.

Read:  Liam Wilson vs George Kambosos Jr Could Be Next Australian Super Fight

It was a really tough fight for Frampton, and he just doesn’t have the talent to compete with Donaire, Rigondeaux, Abner Mares or even probably Vic Darchinyan.

Those guys are a cut above Frampton and if Hearn makes the mistake of putting him in with them, which I don’t think he will, he’ll lose. What Hearn seems to be doing is maneuvering around them in hopes of making Frampton one of the champions without him having to face anyone too good for him. In that way, Frampton would be similar to former WBO super middleweight champion Sebastian Zbik as one of the four champions, but from the best.

If Hearn can wait out Donaire and Rigondeaux until they get old or move out of the division, Frampton could pick up more than one belt, but that’s still unclear whether he’s got the talent to beat the likes of Victor Terrazaz or Miguel Vazquez Jr.

As for Quigg, he’ll have to wait for a while because Hearn will likely not risk putting Frampton in with anyone good until he picks up one of the paper titles.