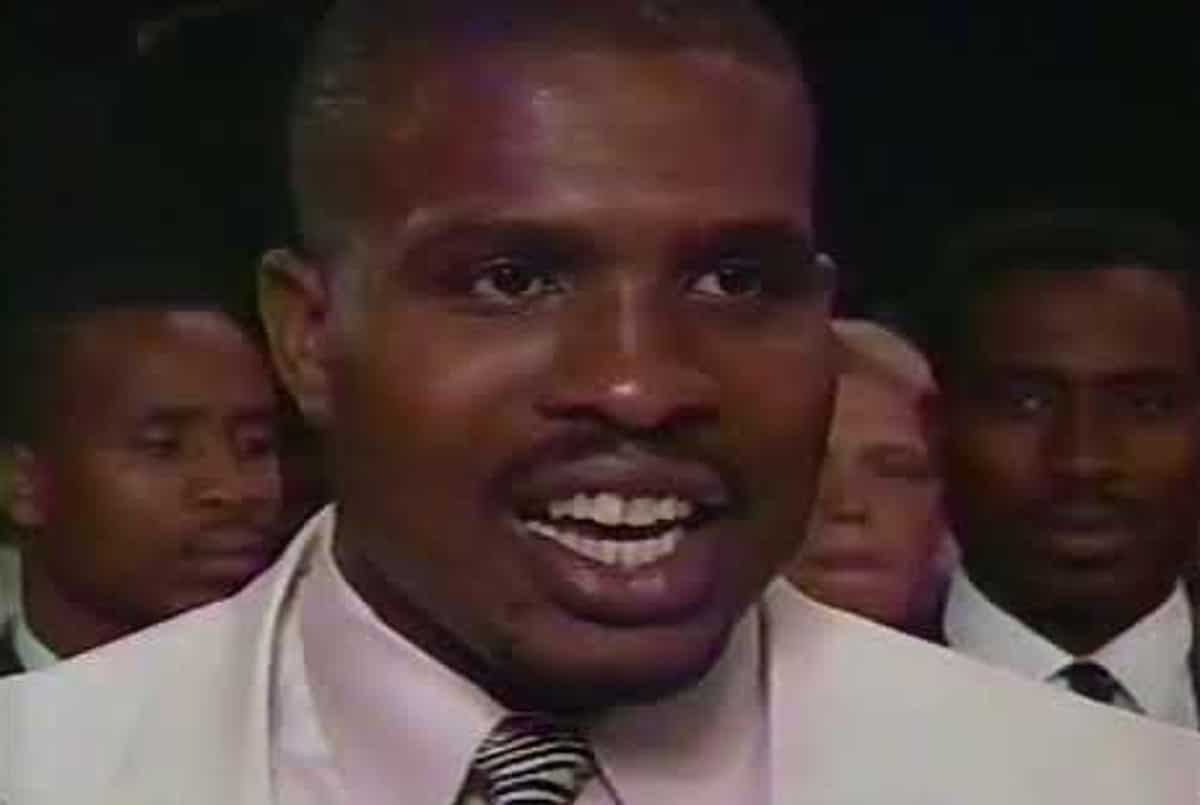 Imagine if Donovan Ruddock, better known of course, as “Razor,” was fighting today. Ruddock – who was born on December 21 of, 1963, this in St. Catherine, Jamaica – seriously lit up the heavyweight division during the 1990s. Win or lose, Razor was guaranteed to give paying fans a great fight. Or a great KO. Or maybe Ruddock would be on the receiving end of a KO that was destined to be memorable.

Best known to today’s fight fans for his two brutal battles with Mike Tyson – Tyson getting a somewhat controversial 7th round TKO in the first meeting and then having to slug it out with Razor for all 12 rounds in the hastily arranged rematch – Ruddock rumbled with plenty of other big-name heavies, including Lennox Lewis, Tommy Morrison, Mike Weaver, Michael Dokes, Bonecrusher Smith, Greg Page, James Broad, and others.

Ruddock, who shocked us by launching a comeback in 2015, this at the age of 51, turns 59 today, and he sure has some eventful, up and down ring career to look back on.

Happy birthday Razor, and thanks for the memories.

Razor had raw, savage power in his left hand, the athletically built warrior’s celebrated punch of choice being a hybrid left hook/left uppercut he lovingly named “The Smash.” This lethal weapon left bodies in its wake. When it landed.

Ruddock began his ring career by boxing, at 165 pounds, at the amateur level. A standout win over a certain Lennox Lewis was the highlight here, but Ruddock’s true calling was the pro game. Yet Ruddock’s early pro career failed to attract too much attention. Held to a draw by the majorly durable Phil Brown in his fifth fight, Ruddock was then beaten in his 11th fight. Tough trial-horse Dave Jaco withstood the early barrage and then made Ruddock quit on his stool after the eighth round in their April 1985 fight.

It was discovered how Ruddock was suffering from a breathing problem, and he was forced to take almost a year off. When he returned, armed with a clean bill of health the doctors had not predicted, Ruddock got busy scoring knockouts. Then, in August of 1986, Ruddock scored his biggest win to date, this being a points win over former heavyweight champ Mike Weaver.

From here on in, now boxing mostly in the US, it was up, up, and away for Razor.

Decent fighters like Larry Alexander, Ken Lakusta (in a return to Canada for the Canadian title), Reggie Gross, and James Broad were taken care of before Razor chopped up “Bonecrusher” Smith in July of ’89; with Razor getting up smiling from a heavy knockdown along the way to his 7th round KO win. Now a noted contender, Ruddock was about to enjoy his coming out party. Enter Michael Dokes and “The Smash.”

In April of 1990, fighting yet another former champ, this time at Madison Square Garden, a 26-year-old Ruddock unveiled his pet punch for the world to see. In the process, Ruddock darn near decapitated Dokes. Gil Clancy, doing commentary (and later, during the post-fight interviews, having to forcibly stop a jubilant Ruddock from snatching off his hairpiece; Gil taking it all in good spirits), stated how Ruddock was the best heavyweight prospect he had seen in years. Razor was now hotter than fire.

A massive fight with heavyweight king Mike Tyson had been set for late 1989, only for Tyson to suffer an illness and be forced to pull out (going on to instead face Buster Douglas in his next fight), and now, in 1990, Ruddock was finding it tough to get a big name to face him. Utterly dangerous, as in lethal, Ruddock had scared off a number of potential foes. Then, in March of 1991, Tyson – by now an ex-champ – agreed to fight Ruddock. To his credit, Tyson fought one of his best fights.

Razor’s lethal weapon was no hit with Tyson, although the two put on a spirited rumble. And a controversial one. Ruddock hung tough with Tyson, but he was stopped, most felt prematurely, in the 7th round. Richard Steele’s itchy trigger finger saw to it that the two power punchers fought again.

In a hastily arranged return, Tyson, looking far less polished and interested than he had in the first fight, took some bombs, landed more, scored a couple of knockdowns, and eventually won a wide 12 round decision. Ruddock had shown a chin of steel, yet he had paid a price in doing so. In his next big fight, this with Lewis, in a fight dubbed “The Fight For The Right,” as in the right to fight for the title, now held by Evander Holyfield, Razor was sensationally blunted inside two shocking rounds in London.

And Ruddock had peaked; he had done all the big things he would ever do. Aside from a thrilling but losing shoot-out with Tommy Morrison in 1995 – and then a bizarre comeback in 2015, this at the age of 51 – Ruddock had made headlines. Today, Ruddock has to be looked at as one of the best, most powerful heavyweights never to have won a world title.

Razor really did light up the heavyweight division for a while, and some of his KOs still leave fans in awe today. Ruddock really was the most fun to watch heavyweight of the 1990s. This was when the division was blessed with the kind of talent and, with it, the kind of great fights delivered on a regular basis, that we fans could scarcely imagine today.