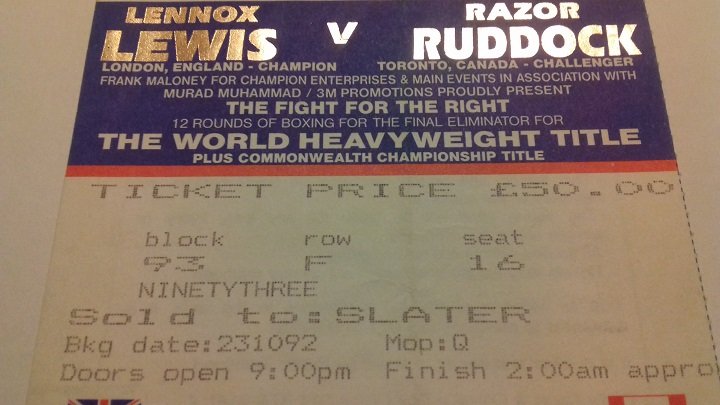 Facing the feared Donovan “Razor” Ruddock – the big puncher with the amazing toughness and durability who had made a name for himself with a frightening destruction of Michael Dokes and had twice gone to war with Mike Tyson – Lewis was the underdog. The fight took place at Earls Court in London and Lewis’ electrifying performance announced to the boxing world that it was now a British big man who was holding status as THE heavyweight to be reckoned with.

Lewis and Ruddock had met before, as amateurs (Lewis of course being born in Canada, before moving to England at the age of 12. Ruddock, born in Jamaica, also moved to Canada) but the pro meeting produced a wholly unexpected result.

Lewis was ice cool, he was razor-sharp and, unlike Ruddock, who appeared nervous as former heavyweight king Floyd Patterson tried his best to give his fighter advice, he was ready to win. After a reasonably cautious start, Lewis dropped a sharp right onto Ruddock’s head, sending him down heavily. The bell came, Razor had beaten the count, and Earls Court was a deafening cauldron of excitement.

Lewis went to work with chilling proficiency in the 2nd-round, dropping a wounded Ruddock twice more, the final knockdown of the fight leaving Razor flat on his face. The fight was over and British boxing had a real reason to throw a party. Lewis-Ruddock was a final eliminator for the WBC crown soon to be contested by Evander Holyfield and Riddick Bowe. Bowe won but then decided to quite literally throw the belt into the dustbin, thus dodging a showdown with the man who had stopped him when they fought in the Olympics.

A Lewis-Bowe rumble would have been great but Lewis’ greatness came in time, with wins over the likes of Holyfield, Tyson and Klitschko. Ruddock never really recovered from the vicious KO defeat, although he did fight on – even fighting and winning a couple of bouts at age 51 a couple of years ago.

Fans who were in attendance in Earls Court 25 long years ago (this writer included) will likely remember the wicked performance of Lewis very, very well!