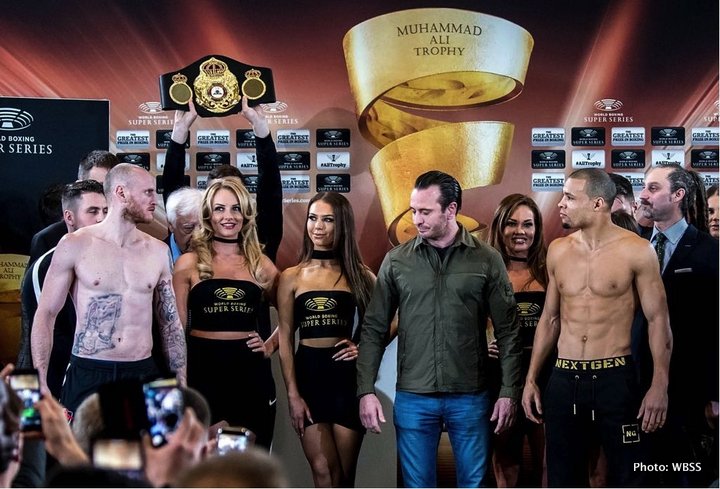 Everyone has an opinion on what will go down in Manchester tonight as seemingly bitter British super-middleweight rivals George Groves and Chris Eubank Junior collide. The fight, one that will contest the WBA crown (currently held by Groves) as well as a place in the final of the superb World Boxing Super Series, has captured the thoughts of the entire British nation – and this match-up has also served to intrigue fight fans the world over.

This one really a genuine 50/50 match-up – for every ten people who say Groves will win, you will find another ten who will convince you Eubank will emerge as the victor.

Here, a handful of boxing experts (who were asked, it must be said, at short notice, just minutes ago) give this website their pick on who wins:

“I’m going with Chris Eubank Junior. It’s his time! If he has the correct game-plan, one where he applies the appropriate pressure, Eubank should get the stoppage win; possibly in the middle to late rounds.”

Ismael Salas, trainer of, amongst others, Jorge Linares and David Haye:

“It’s a very close fight in my opinion, but at the same time in my point of view, skills most of the time kill force. I pick Eubank, by a points win.”

“I hope Eubank wins. I met him when he was just a kid. I met him in Las Vegas.”

“I’m picking Eubank Junior to win, by late stoppage. In my opinion, Groves has been in some wars and he may be declining.”

Johnny Nelson: “Groves. He has that experience and the size.”

Matthew Macklin: “Eubank. Groves is the better boxer, but Eubank Junior is the better fighter. I just think he’s too young, too fresh, too fit and the timing of the fight just suits him.”

Tony Bellew: “Groves on points in a thriller.”

Carl Froch: “Eubank. I’m not changing my mind, but Groves could prove me wrong. It could be points, it could be a late stoppage.”

Now, what’s YOUR pick? Will this one go the distance? Will it live up to the hype? Will we see Groves or Eubank in the WBSS grand final?